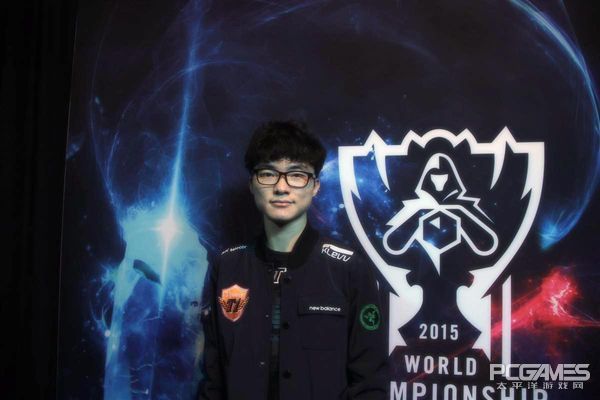 Do you think Westdoor is the world’s best Fizz player?

Faker: When we lane against each other regularly, I don’t think he’s that strong. But today, I felt a lot of pressure facing Westdoor today. His Fizz is top notch.

You could say Ahq learned a lot from EDG. When facing them, did you feel like you were facing EDG?

Faker: When facing Ahq, we didn’t feel like there were too many similarities between them and EDG. But in the late game, we felt like a lot of their strategies had some similarities.

Faker: When we’re on blue side, Mordekaiser is a must-ban. We can’t leak the rest of our strategy, though.

In a couple of games, you chose to play Ryze. Why are you partial towards this champion?

Faker: I liked playing this champion a long time ago. I think it’s appropriate to play him now.

Which mid laners do you think are pretty strong at the World Championships?

Faker: I haven’t laned with a lot of the players at this competition this time around. Most of the mid laners I thought were strong were all eliminated during the group stages, so I’ll have to see how it goes later on.

Tahm Kench has been picked a lot during this tournament since he has a strong effect on the game. Why is this champion considered strong?

Faker: During scrims, we thought he wasn’t bad, so our teammates played him. We used him a lot. As for why he’s so strong, we’ll have to examine this a little more.

In your last game against Ahq today, you faced a lot of pressure. Please tell us the main reason why you won.

Faker: In our last game, my performance in mid lane wasn’t that good. I relied on my teammates to carry me.

Your teammate Bang was killed a lot during the series. His scary KDA eventually sloped down, as well. Is there anything you want to say to him?

Faker: Before the games started today, we had a feeling he’d be killed a lot–we estimated at least 5 times. But a high KDA isn’t everything as long as you play better later on.

Before the games, you probably didn’t think that Marin would be so pressured by the opposition so much that he’d be solo killed. Knowing that tomorrow EDG will use Koro1, do you have any thoughts?

Rumor has it that you’ll come to China to play next year. Is there any legitimacy to this?

Faker: Right now, these are all rumors. It’s still undecided. But for the most part, I’ll stay in Korea.