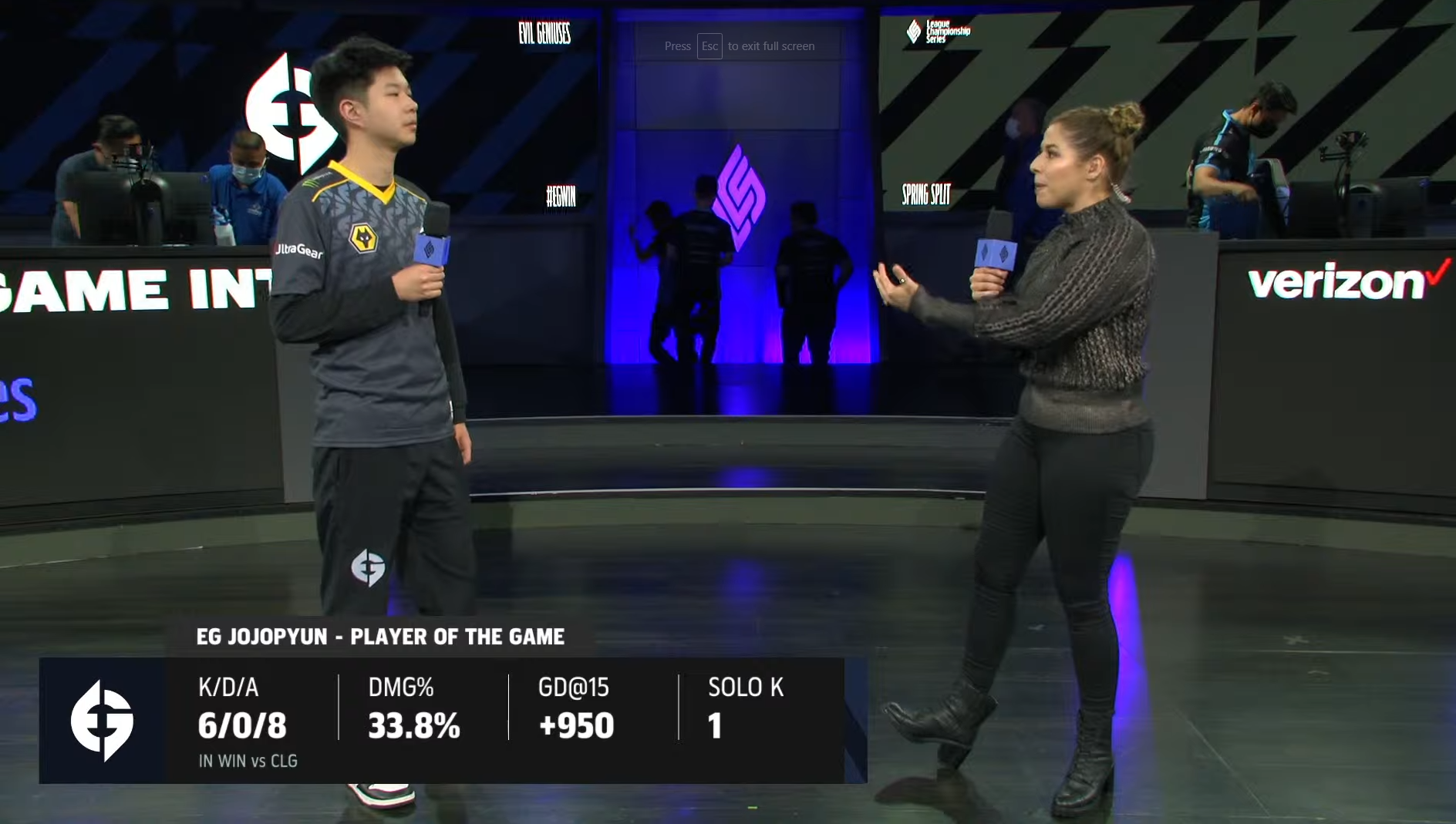 After eight weeks of upsets, controversies, and tons of highlights, the playing field of the 2022 LCS Spring Playoffs has been set following a decisive victory from Evil Geniuses over a few new faces to the LCS stage.

Looking to prove the doubters wrong on the last day of the regular season, EG took down the debuting CLG Academy roster to secure their spot among the top six teams in the LCS. This victory removes Dignitas from contention, though does not yet guarantee where EG, Golden Guardians, and FlyQuest will end between fourth and sixth place.

CLG Academy’s debut on the LCS stage, fielded as a result of CLG’s elimination from playoffs contention, also marked the LCS debut for four of its players, while top laner Dhokla returned to the main stage with a vengeance. Against Impact, one of the most dominant top lane veterans in the region, Dhokla opted for the surprise Vayne pick. While it lanes well into more tanky opponents like Renekton, the champion struggled to make an impact early on.

Jojopyun’s LeBlanc solo kill onto Triple’s Ahri in the mid lane gave EG a clear win condition that they successfully held all the way through. Within 15 minutes, Jojopyun had been fed four kills and plenty of gold, most of which was accumulated by catching CLG Academy out of position.

A triple kill for Danny’s Zeri, accomplished by diving multiple towers in the mid lane, marked an even further advantage in the favor of EG. With an over 8,000 gold advantage over the debuting Academy roster before even the Baron spawned, EG secured themselves a spot in the top six of the LCS, therefore guaranteeing them a spot in the Spring Playoffs.

For getting rid of entire enemy health bars with just a few button presses, Jojopyun earned the title of player of the game with a 6/0/8 KDA. Though they faced tough opponents in their LCS debut, CLG Academy walk away with a handful of experience on the main stage to pair with their first-place finish in the 2022 NA Academy Spring Split. They will continue their run through the LCS Proving Grounds lower bracket, hoping to grab another first-place finish.

This victory from EG places them in the playing field for playoffs alongside Cloud9, Team Liquid, 100 Thieves, FlyQuest, and Golden Guardians. Dignitas have been eliminated from the contention, and join Immortals, TSM, and CLG in waiting for the Summer Split to begin.

The rest of today’s matches will determine where the top six teams enter the playoffs. Fourth through sixth place are still up for contention between EG, Golden Guardians, and FlyQuest, with the possibility of tiebreaker matches following the latter two teams’ games. Should they be necessary, these tiebreaker games are expected to occur after today’s regularly scheduled games.