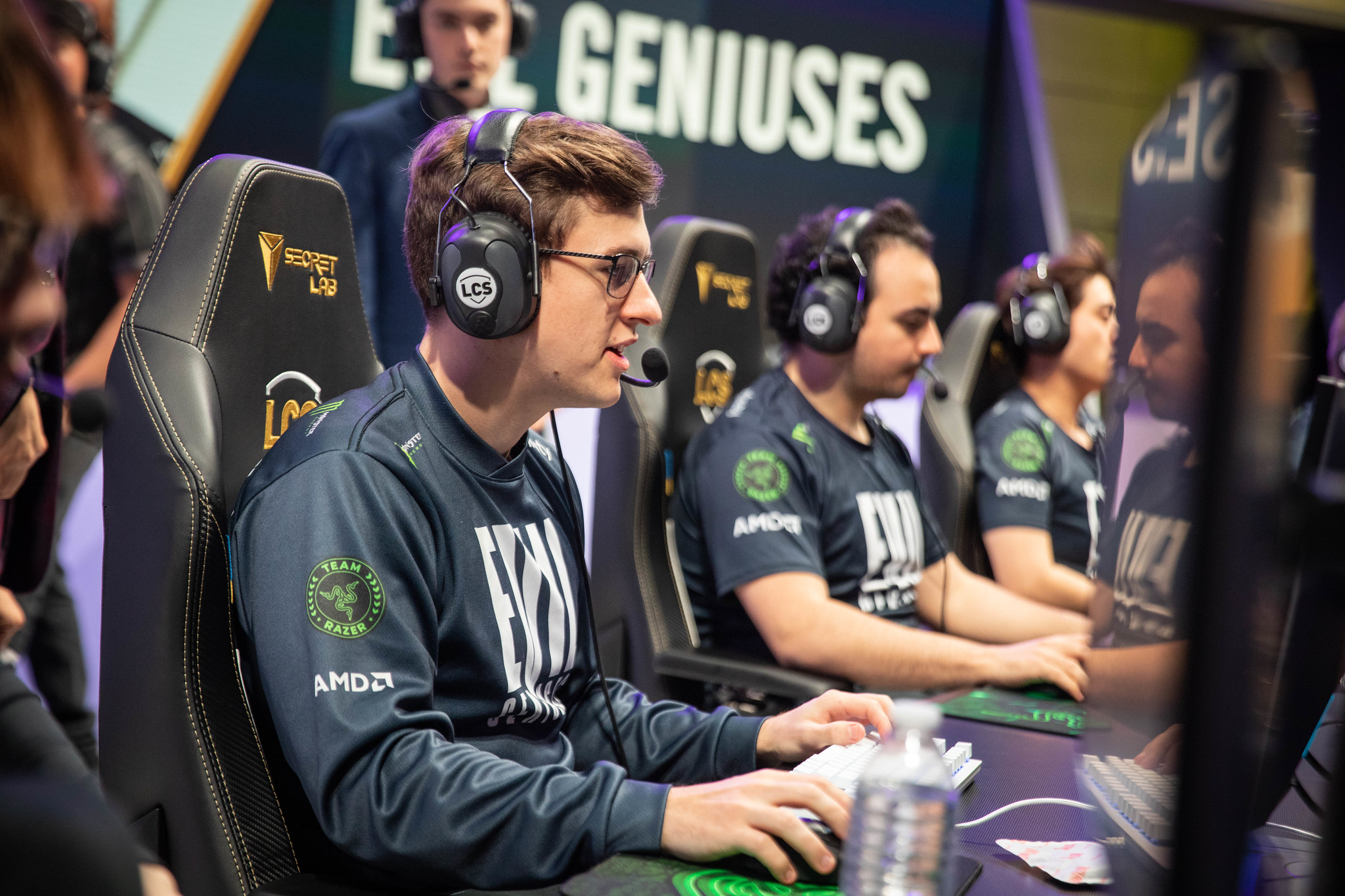 Evil Geniuses and Dignitas will kick off the 2021 LCS Championship (formerly Summer Finals) tomorrow in a best-of-five series that will send one of the two North American League of Legends squads into the waiting arms of 100 Thieves, and the other into the losers bracket to claw their way back to one of the region’s three World Championship berths.

Dignitas have rediscovered Akaadian, who has excelled since he was tapped to replace Dardoch, the former engine of the team. But the team remains relatively one-dimensional and seems rather deserving of their place in the middle of the standings. If this Championship opener becomes a blowout, however, it will be because of Evil Geniuses.

Evil Geniuses haven’t re-invented themselves from the Spring Split. Rather, they have honed and refined a particularly potent, aggressive, and suffocating style of League of Legends that is not only dominating domestically, but has a shot to make some noise at international events as well. The one roster swap they made was calling up Kyle “Danny” Sakamaki, a 17-year-old AD carry that played at the amateur level for Evil Geniuses Prodigies in the Spring Split before skipping Academy entirely and holding down the starting LCS spot all split. And if the idea of Danny potentially getting to face the likes of GALA, Lwx, and Rekkles at Worlds just six months removed from playing in Proving Grounds doesn’t get North American fans who have been banging the “develop domestic talent” drum excited, then nothing will.

Seeding for the LCS Championship depends on combined record as opposed to just Summer Split record, and that can lead to some deception as far as a team’s current strength. But for the eight teams that made the playoffs, their overall records and Summer records put them in exactly the same place—except for Dignitas. Therein lies the betrayal of just how one-sided this matchup might be. No one has a better record in the Summer Split than Evil Geniuses (TSM and 100 Thieves both share that 18-9 mark), and in a game like League of Legends that changes every two weeks with patches, more recent results do hold more weight. Through that lens, Evil Geniuses might have a better case than any in the LCS as to why they should go to Worlds.

Jiizuke has reached his final form

Evil Geniuses’ mid laner, Jiizuke, has made leaps and bounds this split in terms of his consistency. He has nearly completely shed the reputation that has followed him around as a sometimes dangerously and counterproductively aggressive player—so much so that he secured a Summer Split All-Pro nod.

Jiizuke is still aggressive, just not recklessly so. And while his Lucian has fit into that Goldilocks zone and is 5-2 in the Summer Split, he is even more devastating on Ryze, with whom he is 5-0. The design of the latter allows Jiizuke to channel his aggression into the macro as opposed to the micro, and the results have been calamitous for opponents.

Similarly, after being freed from tank duty on Team Liquid, Impact has proven that although Renekton was extremely busted in the Lock In tournament where he began his resurgence, that level of domination was no fluke. Just as recently as week seven of the Summer Split against Dignitas, Impact (on a much more balanced version of Renekton) solo killed both mid laner Yusui’s Irelia and top laner FakeGod’s Volibear before the five-minute mark. Just after the 11-minute mark, Impact was up almost 60 CS on FakeGod. It’s one thing to know that Renekton is at his scariest in the early game. It’s another thing entirely to take that piece of information and single-handedly pry open a cavernous advantage from which your opponents will never recover.

Impact and Evil Geniuses have both spoken at length about how “unlocking” their top laner has changed the team’s fortunes. The former world champion finally has the ability to show just how gifted of a player he is in the macro and micro levels, as well as dictate the pace of play of his team. He has helped turn Evil Geniuses into, as their name might suggest, one of the most overwhelming early-game teams in the region. The risks they take, even if they fail, are for the most part, understandable and calculated.

Neo and aphromoo have to win this series for Dignitas

Dignitas are not completely helpless, though. Their bottom lane has sneakily been one of the best in the league in terms of early, two-vs-two aggression. Rookie ADC Neo has flourished under the veteran guidance of aphromoo, but one could be forgiven for not knowing it based on the team’s record. Neo and aphromoo have the highest first blood rate in the league by a sizeable margin, according to Oracle’s Elixir, and they’re often doing so on champions that aren’t known for laning dominance, although Neo’s patented Kalista is still as potent as ever.

Neo’s kill participation sits at 70.8 percent, which is also the best of any AD carry and the highest mark of any player in the LCS that isn’t a jungler or support. This stat does reflect, however, some of Dignitas’s over-reliance on Neo as a carry threat. And as 100 Thieves’ Spring Split roster knows, good teams will find ways to exploit one-dimensional League of Legends.

That being said, if Akaadian can stay on the hot streak that has won him multiple Player of the Game awards recently, you can bet your bottom dollar that that’s what the boys in the yellow and black are going to be playing around. The flipside of that coin of course, is that Evil Geniuses love to dictate the early tempo of the game. And even if Akaadian prioritizes the bottom side of the map, Dignitas’s top side will have a heavy burden to bear, because the Geniuses will punish with cross-map plays in swift and brutal fashion.

Evil Geniuses are massive favorites in this series and will likely make quick, maybe even brutal, work of Dignitas. But even if the upset happens and Dignitas score a date with 100 Thieves in the next round, this series is guaranteed to be must-watch, playoff League of Legends. The month-long playoff tournament begins on Saturday at 4pm CT.