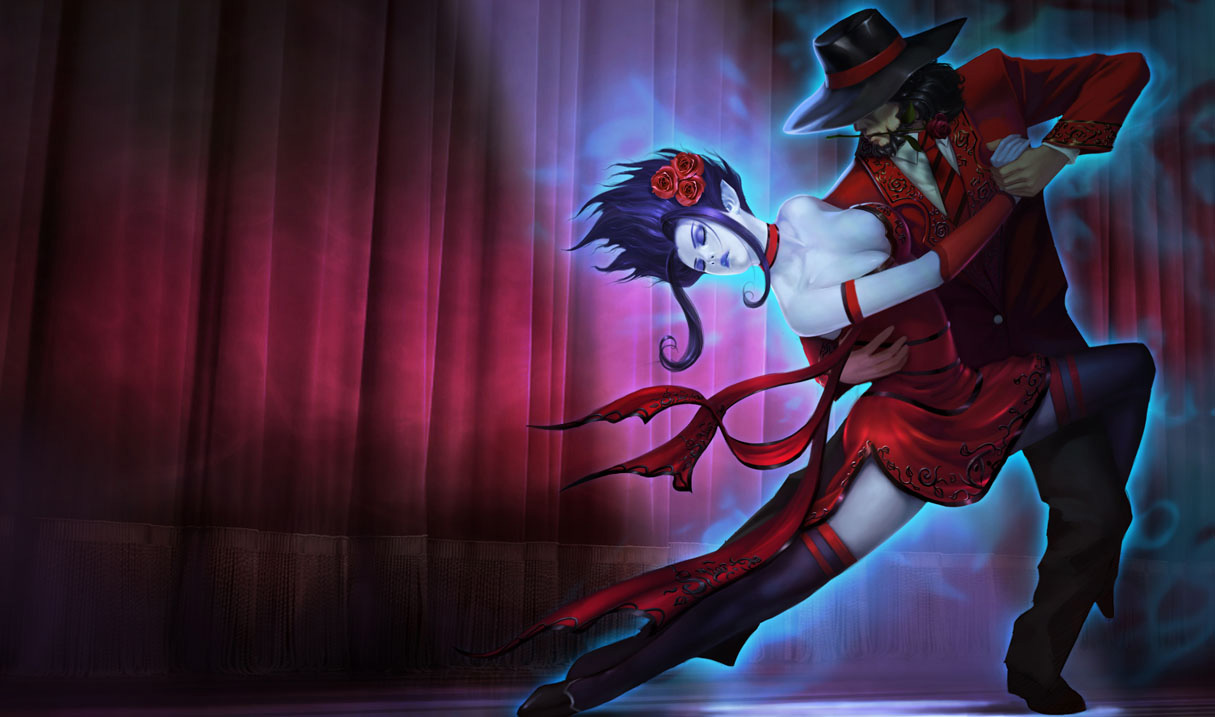 With the introduction of the recent patches to League of Legends, Evelynn has received a number of buffs to her which might just bring her back as a viable pick in both competitive (or at least I would certainly hope so) and soloqueue – the biggest ones being the introduction of Thunderlord’s Decree (the most dominant and overall strongest mastery on 5.24), the revival of Fervor of Battle (6.1) and lastly, the buff to Deathfire Touch, which, although it was already fairly usable, makes it a very solid decision on the current patch.

Selling point: additional damage over time, huge scaling with all the stats an Evelynn player should already be in love with.

Deathfire Touch: Dealing ability damage to enemy champions applies a bleed, dealing 1 (+ 3.125% AP) (+ 7.5% bonus AD) magic damage every half-second for a duration based on their type.

I think this one goes without saying – since Evelynn already scales well with both AD and AP, it is not unnatural for her to look to add items like Guinsoo’s Rageblade, Rylais Crystal Scepter or Maw of Malmortius to her build, since they can elevate her damage output significantly, and in some instances, her survivability as well.

This is your later game/damage-oriented mastery if you are looking to build at least two damage items – and with your ultimate as well the introduction of the Runic Echoes, you will be able to proc it onto multiple champions at once when initiating or joining into a team fight, which gives it that bit of additional damage and usability in the later stages of the game.

Note: even when spamming Q, there will at least be two procs of Deathfire Touch between every single spell cast (three, if you are not investing into cooldown reduction), resulting in an additional 2 (+ 6.25% AP)(+ 15% bonus AD) magic damage per Hate Spike.

And for clarity’s sake: ability damage refers to damage caused by abilities (as well as Luden’s/Runic Echos), as opposed to the popular belief that it is somehow an alternate term for magic damage – that means that even Garen’s E triggers ability damage effects such as Rylais, while Corki’s basic attacks will not.

Thunderlord’s Decree was all over the servers, and seeing less than 8 of them in a match was quite the rarity on patch 5.24, so seeing it still be a viable option should come as no surprise – the caveat with this one is that it falls off in scaling, compared to its alternatives in Deathfire Touch and Fervor of Battle, but will mostly rely on its level scaling as opposed to raw AP, AD or attack speed scaling.

You will want to pick Thunderlord’s mostly when trying to snowball extremely early, and attempting to finish the game before 30 minutes – beyond that point, I don’t think it holds a candle compared to its counterparts anymore, as its alternatives will outscale it rather quickly, be that through getting a damage item or two in the case of Deathfire Touch, or just through hitting your E when at a higher attack speed and level for Fervor of Battle.

One thing worth mentioning is that by taking Thunderlord’s, you can also take the Precision mastery for flat armor and magic penetration (which, although nerfed, is still worth quite a lot). This offers a little extra damage early on (pre-completed jungle item) before Deathfire Touch can start to really make its impact felt. Whether or not that is worth trading away the later game power of is up to you – I believe Evelynn’s early power is fairly high already, so pushing for an early win should still be possible, even without the additional flat penetration that Precision grants.

Still, Thunderlord’s is surprisingly useful if you are planning to go very aggressive early, as opposed to the counterjungling and information-based playing style that Evelynn can offer, so it still has its place in certain games and matchups.

Fervor of Battle: You gain stacks of Fervor for 6 seconds whenever you damage an enemy champion, stacking up to 8 stacks, based on the type:

With the recent buff to this mastery it both takes less time to stack, as well as the fact that each stack of Fervor became more valuable, this one suddenly becoming useful might be a surprise to many.

Let me just put it into numbers: one stack of Fervor will give you an additional 14 physical damage on every basic attack (including your E, since it applies on-hit effects like basic attacks do) at level 18, meaning that at eight stacks you will deal an additional 112 damage per attack.

Doesn’t sound good? Think it’ll take too long to build up to be useful?

Here comes the fun part: your E counts both as ability damage as well as a double auto attack, so it automatically applies six stacks of Fervor, basically increasing your auto attack damage by 84 in just one press of a button, with your next basic attack stacking you fully to eight stacks.

If that’s not enough for you, your E is also an attack speed steroid of up to 120% attack speed for three seconds, so you’ll be battering down on them with quite the increase in damage for a few seconds if things go your way.

Where Deathfire Touch is your magic damage-over-time and AP/AD scaling solution for the later game, Fervor of Battle ends up being pretty strong just through level scaling along with your E’s attack speed steroid alone, but really ramps up in damage with a Blade of the Ruined King or Trinity Force in the build and will certainly do you a favor if you can’t invest into multiple damage items – it is also physical damage, so it will further help to make you a hybrid damage dealer.

Note: since this mastery relies on your ability to persistently attack the enemy with basic attacks, you will want to get a Rylais Crystal Scepter, Blade of the Ruined King or Dead Man’s Plate in your item build to ensure you can take full advantage of it.

Grasp of the Undying

Didn’t expect to see this one here, huh? Yeah, I didn’t either.

Selling point: damage based on your health, sustained damage and healing.

Very situational, but also very straightforward: this is the mastery that you should only consider when planning to go into the game as part of the front line.

This means that you will only want to take this mastery under the condition that you will actually build a) a lot of health, b) can actually stick to the enemy for a prolonged period of time and c) sufficient resistances to last for a while in the heat of battle.

Your prime item choices with this mastery will be Rylai’s Crystal Scepter, Randuin’s Omen/Dead Man’s Plate, Sterak’s Gage and well, most other tank items.

I don’t think we can nominate one keystone mastery as the clear and sole winner of this debate since all of them hold strong merits in their respective situations (although Grasp of the Undying is probably your least likely choice in soloqueue), but it’ll be more along the lines of you finding which style of play suits your Evelynn best, and building it from there.

Want to stock up on AD and AP, have strong burst with the ability scalings and want to pad out your sustained damage output a bit more? – Deathfire Touch is your mastery of choice.

Want to build just one damage item, end it early and gank as much as possible? – Thunderlord’s Decree is here for you.

Want to go for the sticky Ruined King build and abuse the everloving hell out of your attackspeed steroid and stickiness? – Fervor of Battle‘s got you.

Think your team needs a tank but Bond of Stone and Strength of the Ages aren’t cutting it? – Grasp of the Undying might be your saving grace.

Above all else, you should keep in mind that Evelynn is a very versatile jungler and probably one of the champions whose playstyle varies the most on a game-by-game basis, as her front-up power is rather minimal at the start of the game.

Sometimes you want to scale and bulk up, sometimes you want to get some early counterganks off, sometimes you just want to clear your half of the jungle, place some vision and track down the enemy jungler when you have a feeling where they are, smite-steal their big minions and minimize their impact on the early game, so chose your mastery and rune setups accordingly.