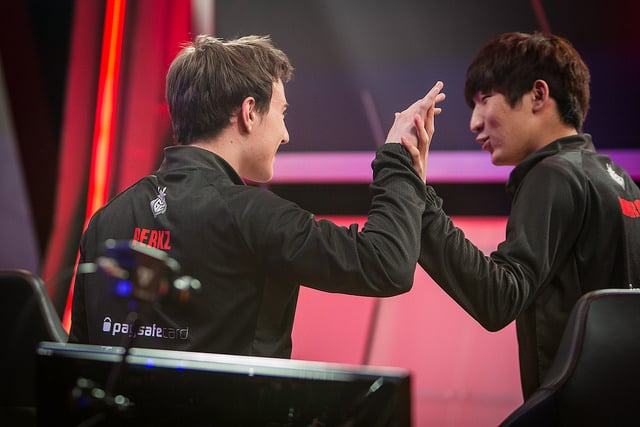 As we approach week four, we’ve started to see some clear divisions now in the league. The front runners have vastly distanced themselves from the bottom teams and the middle ground. If I had to give the split a formation I’d say we’re running a 2-5-3. Will we start to see those boundaries blur and break so soon after their foundation?

One man was on a mission last week — well, no, he’s been on a mission since week one, but now people are really starting to notice.

Perkz is very good at League of Legends.

The take-down of UOL and Fnatic last week propelled G2 to the top of table where they rightfully belong, alongside fellow front runners and the only team to best them thus far: H2K.

Perkz and squad are on a tear and if Origen want to shut them down they’ll have to play the best League of Legends they’ve played all split. The kind of League of Legends we all expected from Origen prior to the start of the split. Unfortunately its not possible to predict how Origen will perform here. Granted they finished last week 2-0 but their opponents were Elements, who have yet to procure a win against a non-bottom three team (and don’t look like they will) and Roccat who look like a vastly weaker version of G2.

It’s hard to gauge if Origen are seeing better times or if they were simply seeing weaker competition.

To put their inconsistency into more context, they’ve had all three possible week finish combinations so far: 0-2, 1-1 and 2-0.

I have no idea which Origen will show up and I don’t think they do either, that’s their problem. Whereas G2 are a rock, a big heavy consistent rock with a very solid centre. Origen no longer have the liberty of sitting back, something needs to click and it needs to click fast before the season slips away from them.

G2 just look better in every way and in almost every position, while I may still swing the ADC role in favour of Zven, Origen right now appear weaker in all other lanes which is a big worry for what still is a worlds semi-final squad, plus one.

Two teams that have, in the chaos that is the mid table positions, shown themselves to be step above the rest so far. Maybe not in raw power, but definitely in taking advantage of their opponent’s weaknesses and sticking to a fairly consistent high level of play.

I still get annoyed knowing that Diamond being unable to play for UOL is potentially a big hindrance for this squad. The team looked good with Djoko but he belongs to Millenium. It was a quick fix, will the long term solution until Diamond’s situation improves, if it does at all, be one that works out for the benefit of the team?

I have to admit that purely on the basis of team stability over anything else at the moment, Vitality certainly hold an advantage. Still I hold out on the fact that this could still be a really good game to watch if the Jungler picked by the Unicorns’ is strong enough to make an impact early and flexible enough to mash with the team’s dynamic in a short amount of time. Vizicsacsi has looked really good lately, Fox and Steeelback have also had their moments. While I’d give most of the matchups in favour to Vitality, it’s not by a lot.

Utilisation of top laners will be a big one here, whoever gets going first out of Vizi and Cabo could potentially snowball the game in favour of their team. Both teams’s heavy duty snowball machines are perched up in the top lane, so which team’s jungler will take the initiative first, and who will execute it better?

I’m wary of putting too much faith into UOL here; once again I’m left placing faith in a wildcard over being absolutely certain of an outcome. But I guess that’s what I get for believing in magical horned horses.

As much as I want to see UOL win, I’m going to have to drop my anime plot convenience card. It’s going to take a lot of preparation and immediate effect for UOL to come out really strong here.

*Disclaimer, I know nothing about UOL’s confirmed jungle replacement: Rudy, so the draft of this section stays as it was before he was confirmed to start*

Special Upset Mention: Every other game

Here’s something I haven’t done before but something I’m going to stick with for this week, I see all the other eight games this week being fairly one sided.

On paper these all seem rather one sided but in truth there is some element of tension with a few.

Elements have potentially their hardest week of the split against two of the front runner teams and still have yet to secure a win off anyone besides the bottom three. For them I see hardly any stretch of a win condition outside of some catastrophic meltdown from H2K or Vitality, the kind we saw from the latter in week one against Roccat. If Elements and their fans really want to place their hopes in one basket, place them with MrRallez. A stellar performance by him may be enough to turn the tides.

The same could be said for Splyce who literally have the worst possible week against H2K and G2. Even with the magic displayed by Sencux last week, it’s hard to see Splyce pulling any kind of solid performance. Their only win condition is the preservation, protection and preservation of Sencux and that’s a tall order against the top two teams in the league. Still, any inkling of hope is one worth reaching out for.

Of all the teams I predict going down this week, Roccat actually have the best potential to surprise me. With the new addition of Tabzz over Safir I’ll come forward and say the roster seems a lot stronger. Honestly the fact that Tabzz wasn’t on an LCS team come the start of the season really shocked me.

If Roccat manage to integrate Tabzz into their style quickly, he and Betsy could prove to be a very troublesome combo for teams to deal with.

Airwaks and Fredy are solid players and Extinkt is hard to call for me but I can potentially see good things from this improved lineup.

H2K and G2 continue to be solid high scoring additions to Fantasy teams, especially owners of Perkz. I made the mistake of doubting Perkz last week and benching him. Don’t be like me.

As per usual, avoid Splyce and Giants players like the plague, unless you want to bank on some Sencux magic again. I’d advise against it, unless you think you’re super lucky.

Once more continue to be wary of Origen players, especially with a game against G2. The squad’s inconsistency has also reverberated into their points, with Zven being the most reliable point scorer. As per usual they may not score as high as you might need them to, but you also run the risk of being fairly disappointed if you drop one and they do.

Fnatic members could certainly be promising as they face slightly improved Roccat and Giants and as I mentioned in the last section, Roccat have room to surprise now with their new ADC. If the change is beneficial for them, the competitive value of their game against Fnatic will go up and so will the points value.

Vitality members have seen some really back and forth moments but shouldn’t be too bad of an investment here as the game against UOL may score high. They also won’t see too much issue against Elements barring a stand-out performance from someone like MrRallez.

My ideal fantasy team of the week:

If you enjoyed this and or have any feedback, shoot them my way on twitter:

All feedback is worth hearing.