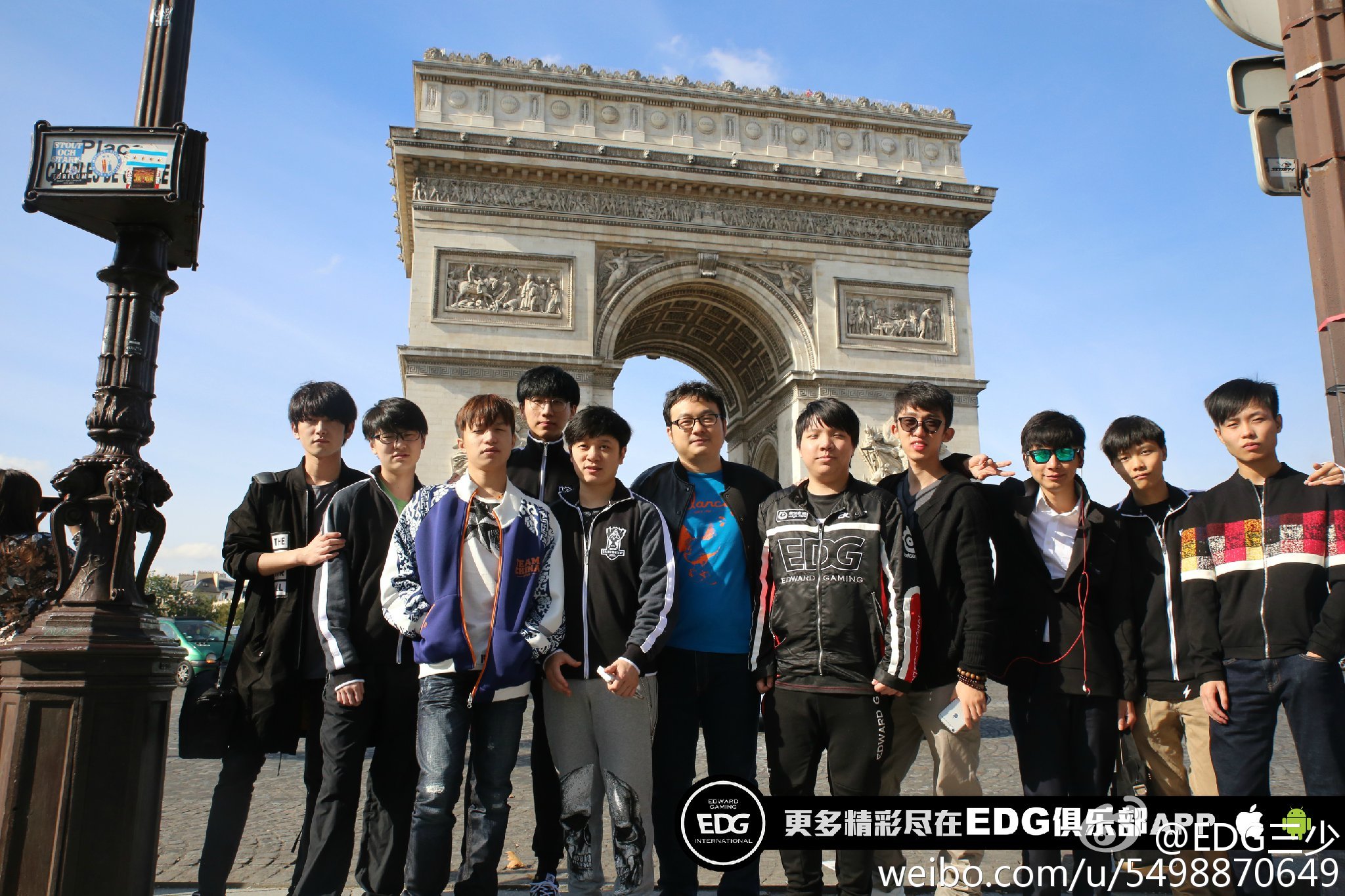 We’ve been in France for nearly half a month. This is the first time we’ve been on break. After being given some advice from the fans and friends, we decided to make a plan. Arc de triomphe, Avenue de Champs-Elysees, The Louvre, The Seine River, the Eiffel Tower–and then dinner. It’s a beautiful journey. We’re preparing for it, and we’re awaiting our departure.

From my impression, France doesn’t have anything to do with romance. Danger and public security is the impression I have of France. But since we’re here and we have some time, we might as well take the players out and explore.

Our first stop was Arc de triomphe. When we came out of the car, it felt like we arrived in a completely new city. It was like we stepped into the scenic landscape of a painting. The sky was blue–very blue–incredibly blue!

We continued walking forward. This city’s famous arc was sitting at the center, imposing and glorious. It’s hard to believe that it’s a couple hundred years old. How did they build it? It’s been through so many different time periods and years–and it still leaves an impact on people today.

We chose to come here first because this is an arc that represents victory and we hope we can return home victorious. This arc seemed very grand.

The arc only had one large arched door and on top of it was an extremely large sculpture on each side. It represented the history of France–especially the side that faced the Avenues des Champs-Elysees.

On the lower right was the world famous La Marseillaise. This arc represented the army’s military campaign–getting ready to head into battle. The sculpture on top was to honor Napoleon’s victorious return. On the peak was the name of the military campaign engraved. We knew this was Paris, sitting right in front of us.

WWI and WW2 didn’t take place in native Paris soil (note: I DID NOT WRITE THIS DIARY), so they were able to preserve the buildings perfectly. While overlooking the city, we felt carefree. Europe’s perfect architecture, culture, and calming surroundings lets you sigh with pleasure.

The players said this was the Paris they knew. After leaving the arc, we bumped into some players–it turns out it was Faker. It seems they also chose to head out today. They posed for a picture.

We asked him–didn’t you just take a photo with him yesterday? He replied loudly, “I want to take a picture with him everywhere!” He was really excited.

Running around everywhere, he asked me, “Shan Shao. How would you celebrate if you returned victorious?”

I thought about it and said, “By throwing you up in the air.”

As a result, I picked him up in the air without any trouble. I didn’t expect he’d throw out a graceful model pose. Everyone laughed so hard.

At this point, people started getting rowdy. I picked up Koro and threw him in the air a bit. This wasn’t as easy as it looked! Anyway, at any time, I’d throw the princess into the air.

After letting him down, I realized he might’ve been lighter than Ai Lo Li. I didn’t think this guy would point to the guy next to him…

I shook my hand and said I can’t pick up this deep sea titan. But surprisingly, Koro said he wanted to try. I sneered and convinced him it was like hitting a stone with an egg. AmazingJ’s arms were bigger than his legs.

He didn’t believe me and wanted to try. As a result, both of them tried to get on, and they failed.

We had to rush to the next place. At the souvenir shop by the Arc, we picked up this special item.

We decided to give this to our pirate to see who can obtain this award.

Things went according to plan and we browsed through the Louvre.

We managed to make it to the Seine afterwards to sightsee on their cruise ship. The ride was cozy.

Now, I’m experiencing the old history of Paris–and I’m seeing its wonderful charm. The cozy and somewhat chilly wind blew against the ship.

We sailed through a lot of historical sights and it helped us further understand Paris’s history and accomplishments. This beautiful European architecture strands out–clear and visible.

And there were some couples that were hugging each other–looking at each other in front of the river.

It’s a romantic feeling that started to arise–and I was able to experience it. This place allowed me to understand this different lifestyle. The tour guide on the boat said–this is the kind of city that makes you feel it would be worth going to a second time. I nodded my head because I felt the same way.

For dinner, we went to a Michelin star restaurant near the Parisian opera house.

This is a restaurant that’s highly regarded in Paris. From the pictures mounted on the wall to the tableware–everything represented the grandeur of a Parisian meal. If you don’t dress well, they won’t serve you. So before entering, I was really anxious. But we managed to succeed in entering! Afterwards, we said we definitely needed to sit together.

Eating is always something that makes people happy.

I think winning might make me happier than this.

Our trip in Paris is quickly coming to an end. In the next leg of our trip, we have to get ready once again and head out on our way. But I think our players have already prepared well and they’re ready to meet any challenge head on.

A veteran player announced today that he’d retire. After returning to the hotel, I managed to bump into him in the lobby. To this player, I really admire you. I hope your path gets better and better down the line.

Pawn’s waist is in pain. Today, he decided to rest. Deft wanted to keep him company so they both decided to skip out on the trip today.