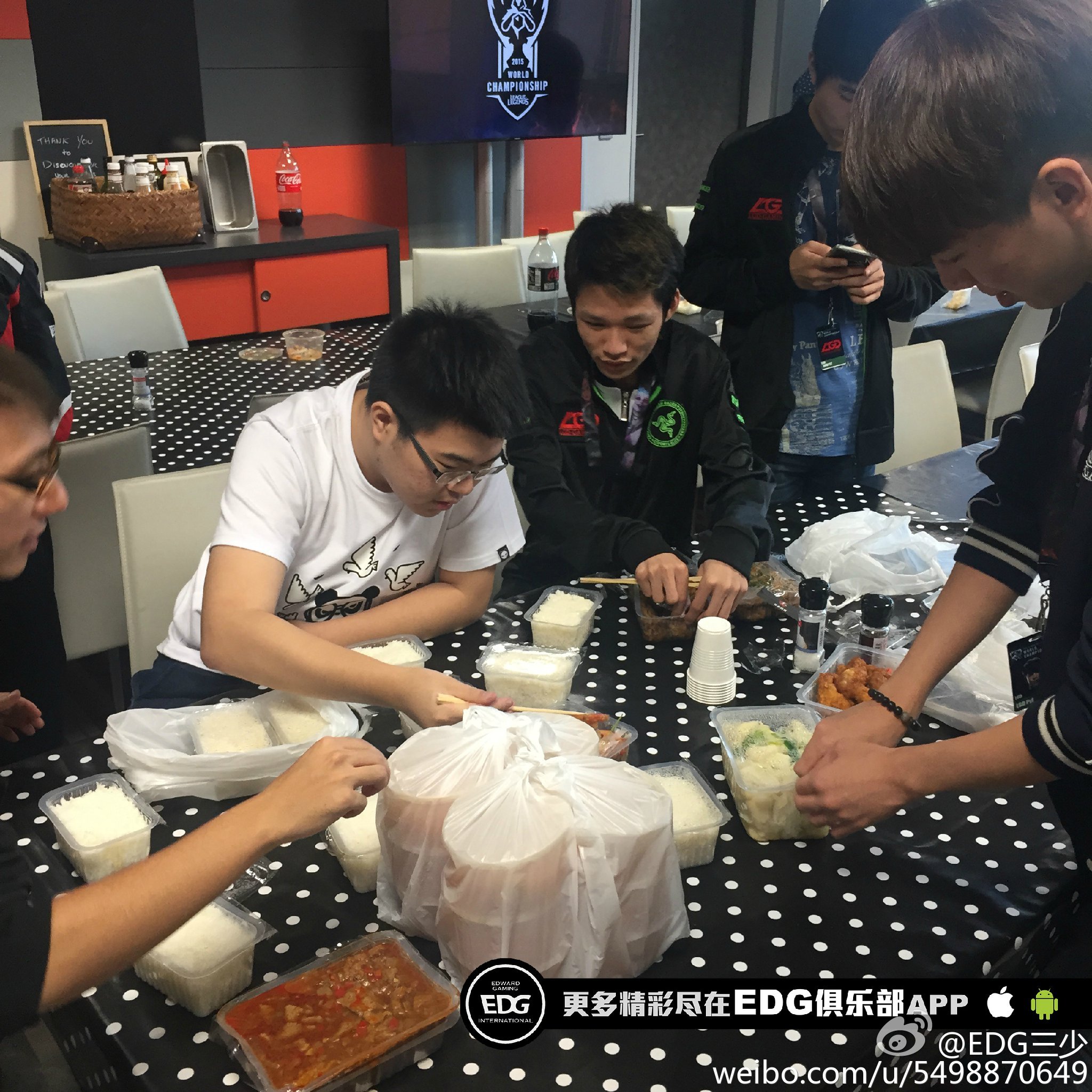 As I open my eyes, I realise that it’s already morning. The pigeons from yesterday are also long gone. Kicking aside my blankets, I reach out towards my phone. It’s almost time to begin our last day of preparation. As everyone gathered at the training room, there was a sense of nerves ahead of our final day to rest, wait for lunch, and prepare for Worlds.

The condition of all the Chinese teams today is not very good. Especially in the case of LGD’s players, who struggled to adapt to the local cuisine. Naturally, after the way I teased them yesterday, they could no longer hold back. Today I went ahead and organised some Chinese food for them. TBQ in particular said that it felt like years since he had last eaten rice.

Hopefully they can quickly get themselves match-fit.

Soon, the last few bits of preparation will commence. As for our starting roster for the opening game, after extensive discussion, we’ve settled on using our substitute Toplaner: AmazingJ to replace Koro. As for Koro, he seems a bit lonely today.

However, he still stayed with his team throughout practice and the discussion that followed. Practice was especially intense today. Today, we scrimmed numerous times with Taiwanese and Korean teams. After the games, there was much discussion as well as suggestions made.

It’s apparent that the players could feel the added intensity. The atmosphere backstage was no longer casual and there was definitely less commotion. The training rooms of all the teams were tightly shut. When we do run into one another, there’s no longer any casual gossip or chit chat. Just the polite nod and gesture before bidding one another farewell. Behind every door, it was difficult to fathom what kinds of preparation they had. After a year of hard work, tomorrow they will face the real test. Every match means more than a simple win or a loss. The teams also shoulder a tremendous amount of expectation, pressure from management, the reputation of their region, as well as the hopes and dreams of the fans. As for our own players, it’s obvious that they are anxious and even more hard working during todays practice. At night, the dry weather made everyones eyes uncomfortable. Luckily I brought some stress-relief eye drops beforehand.

There are countless articles analysing and predicting the results. As for key areas to watch, there are many different opinions. As for my personal opinion on the group stages, perhaps they’re very different than most people out there.

I believe that the groups with the most competition are A and D. Especially in the case of group A, the fight between CLG, Koo, and the Flashwolves for the two qualifying spots will be incredibly intense. The Flashwolves have the ability to topple the other two teams. As for my prediction for this group, it’s really hard to say at this point.

Group D is naturally the most difficult group in this tournament. LPL’s LGD have to play like they normally do in order to have a chance to qualify. As for KT’s style, it kinda counters LGD. As for who wins on the day, it’s totally up to who’s form is better. TSM is the experienced old guard that’s been through countless tournaments, LGD has to make sure they’re not taken by surprise. The biggest watching point in this group is the fact that it has the strongest 3rd seed team: OG. This team, led by the legendary Xpeke, must not be taken lightly. The aforementioned three teams, if one of them falls off or makes a mistake during pick/bans, then they could lose to OG. The matches in group D should be worth watching and analysing. Even though I still think LGD and KT makes it out of this group, you never really know.

Group B may appear to be unpredictable, but in reality it should be pretty easy to rank the teams. iG, as far as their overall strength, is higher than the other teams in this group. If they manage to perform at their usual level, they should top the group. As for the remaining spot, it should be between FNC and AHQ. As long as iG performs at the level they showed during Regionals, they should have a good chance to beat all the other teams in this group.

After having experienced two international tournaments, we’re much more familiar and organised with our preparations this time around. Our new addition this year: AJ, as well as Fireloli, have both been very good at lifting the teams spirit in the training room.

Tomorrow is his (AmazingJ’s) debut on the world stage. Hopefully he can show you guys his skills and help us get the win. During the entirety of practice today, the one who had the most to say was Clearlove.

Still recovering from his injury, the man of few words: PawN trains silently.

The one who’s rather moody today is Deft. The who’s been running around all day is Meiko.

The 2015 World Championships will commence tomorrow. We’ve finished our preparations. As for the readers, are you ready?