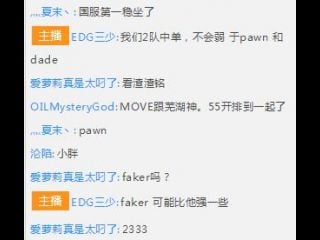 China EDG fact: When the manager lives in EDG second team in the new sheet (suspected rooke) whose strength is not weaker than Pawn and Dade!!!2 teams to play LSPL nakano will contest!

At the same time, the 2 and 1 unit in the humans (suspected that the jungle-Clearlove director to second team)!

Last week (11 November) EDG first official released breaking news?that Deft has joined the EDG. After that, Deft said he would prove that he is the world’s first ADC! And he said he joined EDG because he likes playing with `Clearlove’.

Since Deft came to China he made a lots of flirting actions when he ranked with Clearlove in China LOL. I have to say the big Clearlove is glamour infinite.

About Deft and Namei for AD carry , EDG is given that : Competition! Better one is up. Although it`s accidental, but it`s also calculate for the result.

What’s more, EDG manager revealed EDG second team will recruit a guy who is at the same level as?Pawn and Dade.

EDG manager :Our second team`s mid won’t be weaker than Pawn and Dade!!!Faker may be stronger than him!

EDG manager:EDG top is also very important (Koral will be steady)! Mid and jungle of 2nd team are going to play in LSPL!

EDG manager: EDG.F(2nd) and EDG.G(1st) will exchange some people with each other. LSPL is also important! Dandy I can’t afford it! He has already signed with someone else!

In the end, if EDG copys?Samsung model to have competition between their two teams. It`s really conducive to the team development. The 2 teams may be able to get LPL and LSPL qualifications at the same time to achieve a win-win situation!