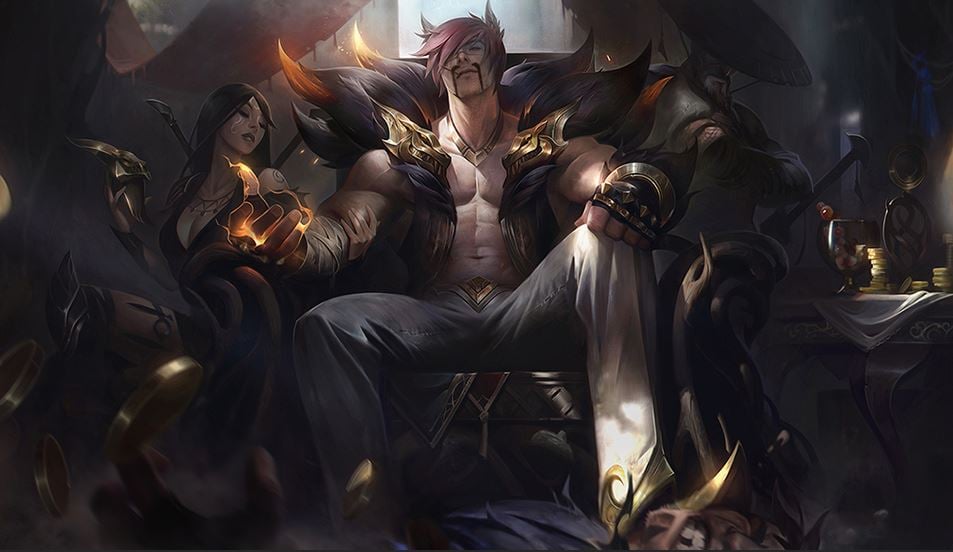 Sett, League of Legends’ next champion, is certainly catching the eye of players everywhere.

He’s half-Vastayan, a mama’s boy, and shredded as hell. What’s caught the most attention, however, is the fact that Sett is definitely, totally, without a doubt Draven’s son.

The lead producer of champions at Riot, Ryan “Reav3” Mireles, publicly addressed the rumor on Reddit and said that it wasn’t true—but it definitely is.

Let’s break it down piece by piece so that the undisputed facts don’t get lost in the intrigue of it all. The facts aren’t opinion and can’t be refuted. The facts are on the side of justice, of finding Sett’s father, and, in doing so, allowing him to close a painful chapter of his life.

So let him have this one, will you?

Sett had a rough childhood, that much is clear. He had a deadbeat dad, but a mother who he loved. His Noxian dad just had to get some Vastayan strange and Sett was left as the byproduct—to be bullied and hated on by some ignorant people. He couldn’t find his place with the Vastayans or Ionians. He never seemed to fit in. It seemed like his destiny was only to be hated.

When he was young, his father offered protection from harsh words and open prejudice. Then his father left him to the wolves (birds?). Sett had to put on a tough face and a hard demeanor to deal with his youth. In his anger, he started physically fighting those who insulted him. Noticing this behavior, his mother warned him not to go near the fighting pits as his father had.

Wait. Hold up. The fighting pits? Who else is heavily involved with the Noxian fighting pits? Draven, aka Sett’s dad. Technically, Draven’s “fighting pits” are really just games for Draven to kill Noxian prisoners, but still.

When Sett goes to the pits and asks about his father, he’s told that his father is touring more profitable fighting pits. Who would leave their family in search of money? More money than the fighting pits offered? Draven. More importantly, that’s a really vague answer.

Sett ends up running the pits after winning fight after fight in what can only be assumed is a cry for attention from the father that never gave him the time of day. This dude has serious daddy issues.

Draven is the “Glorious Executioner,” whose ambitions are too much for Noxus. He tried to find his way to the center of the limelight and finally found it through his exuberant executions. He was a hit. He was famous. He finally had everyone’s attention. But even that wasn’t enough for Draven and he decided he needed to share his talents with the world.

Draven is thirsty for fame. Draven is thirsty for notoriety. Draven is sick with ambition. There’s a zero percent chance that Draven would give up his future dreams for some kid, even if it is his. At that point, it’s almost more like competition anyway, because only someone like Draven could get close to beating Draven (but of course no one could beat Draven at anything).

This strive for fame would certainly lead him to explore more notorious exploits during his time invading Ionia, too. And what better way to climb the ranks of public affection would Draven have other than to beat the snot out of people? Imagining a world where Draven fought in those pits is far from implausible.

Obviously, Draven and Sett are both accomplished fighters. They both also have a thirst for more. Draven always wanted more attention, while Sett wasn’t pleased to make the money that he was from fighting in the pits and instead wanted to be the boss of them. Comparing the two, they both have cocky attitudes and think they can do no wrong. Sett loves his mom and Draven loves his brother (we assume?). The apple doesn’t fall far from the proverbial tree.

Draven was never going to be the father he needed to be, and he knew it. He chose to leave instead of ruining his own life by limiting his options. In the process, he ruined the life of his own child. Sett felt he had to find his own way and ended up following in his father’s footsteps more than he realized.

Rioters are trying hard to throw players off the scent of this rumor. It says clearly, plain as day, in Reav3’s Reddit comment that they aren’t father and son (though they are related somehow, because Sett’s champion page shows Draven as related. Alistar is, too, so maybe you really can milk those).

The protesting from Riot employees just makes it easier to believe that this was the plan all along. The more they fight it, the more players must be compelled to think that they have uncovered the truth that they weren’t supposed to know… at least not yet.

Whether Sett is Draven’s son, we can all agree that Draven is definitely Sett’s dad.