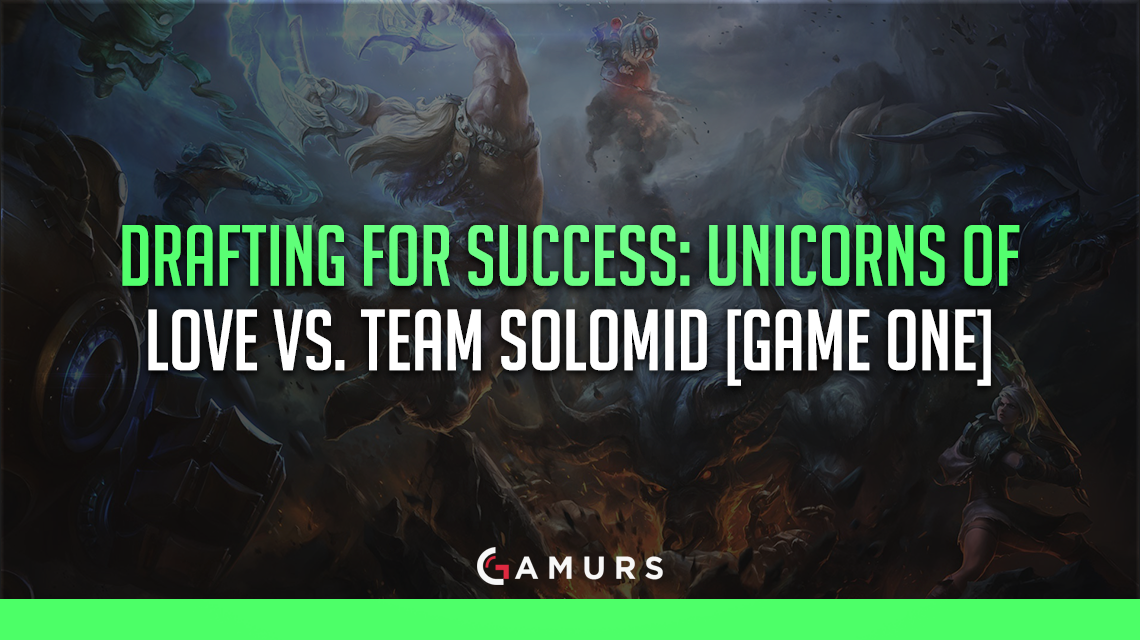 When Team SoloMid and the Unicorns of Love finally got a rematch of the infamous 2014 IEM San Jose series, they came in with a clear plan in mind. TSM, expecting their mid pool to be heavily targeted, decided to try a sneaky strategy around Zilean. On the other hand, UOL, having shifted from their long past cheese mastery into a top lane focused team, did anything in their power to ensure that Kiss “Vizicsacsi” Tamás could carry. Who would come out on top?

TSM had two easy targets to address with their bans. Not only has Bard been a strong pick for Zdravets “Hylissang” Galabov, but his ultimate can also be very disrupting against a Zilean composition, freezing the target of his ultimate and completely nullifying him in the late game. This, combined with the counter-engage it

provides, leaving whoever charges in with the Zilean speed completely by himself, makes Bard a neccessary ban.

UOL, however, needed to address Søren “Bjergsen” Bjerg’s superiority in the mid lane, at least if they didn’t want to get rolled over by the Danish duo. With Syndra being possibly the strongest mid lane pick of this meta, and Bjergsen being famous for his mastery of the champion, this ban is a no-brainer that reveals absolutely nothing from UOL’s plan.

Since Cassiopeia also proved to be a very strong pick for Fabian “Exileh” Schubert, she was also taken out of the game. Not only does Cassio provide a strong early game that doesn’t let TSM milk the mid quality difference, but she becomes particularly scary when your whole game plan consists of, basically, running at your enemy. This is what makes TSM’s composition a good choice; it works particularly well when none of these two comfort champions are available for the Europeans.

I find it very hard to agree with the Jayce though, especially as a second ban. It’s understandable to be afraid that, with TSM having the first pick, they might leave both Jayce and Nidalee open. In this scenario, if TSM picked the Nidalee, UOL would have to either pick the Jayce or face the possibility of having to play against a Nidalee Jayce combo, which would most likely dominate over the top lane. Since Vizicsacsi has no competitive experience on Jayce, they judged the ban to be reasonable.

This, however, is not enough to justify the ban. Kevin “Hauntzer” Yarnell has only one competitive game on Jayce, a loss in which he sported a not very threatening 1/5/6 scoreline. The true motive that makes me judge this ban as a mistake is the order in which it was made. There is absolutely no reason for it to be done before the Ryze ban, since there is no way TSM would ban Ryze for you. They would be more than happy to leave it open and first pick it, gaining kill pressure on mid lane, pick potential,

engage potential and enough damage for Bjergsen to carry with ease.

Knowing all of this, had UOL waited on their Jayce ban and eliminated the Ryze second, they could have avoided it altogether. Instead, the Europeans completely shoved a ban down the drain, as opposed to targeting any safe pick they could be facing in the top lane, making it easier for them to carry from there. This ended up not mattering, since they got the counter-pick in lane anyway, but a Gnar or Kennen ban would have made this counter-pick opportunity more likely.

The is a very standard ban. Since they were looking to play a Zilean composition, TSM nullified Olaf’s late game weakness, and he became a better pick for them. This would leave Nidalee open, giving UOL a very strong early game, where they might pick up a heavy snowball and take the game before TSM’s composition could shine.

At the end of the ban phase, TSM was ahead in the draft, with UOL completely wasting one of their bans. But, the banning phase is only an aperitif; can they stay ahead on the main course?

Olaf is a very safe pick in this meta, but information can be gained from this pick. You know TSM will either run gankable side lanes, where Olaf axes are at their best, or a pushing mid lane and side lane combo, in order to get control over the jungle with Olaf’s early game strength. To keep Olaf useful in the later stages, they will most likely run a heavy engage composition and, to keep him from being kited and killed before reaching the enemy team, at least an extra off-tank is needed.

The blind monk is a fantastic pick to take into Olaf. Not only can you outscale him utility-wise, but as long as you manage to avoid meeting with him while ganking, you have bigger kill pressure on enemy lanes than he does. Even more useful may

be the fact that Lee Sin’s kit allows for versatile pathing and safer warding, granting you strong defense against Olaf’s invades.

On the other hand, Jhin is difficult to justify. As of now, you only know that you are facing Olaf, but this information is more than enough. You will very likely be facing a two tank composition by the enemy team, which, combined with the Syndra, Nidalee and Ryze bans, buries your ultimate’s pick potential so deep into the ground that you will most likely find diamonds around it.

Even more worrying might be the fact that, when likely to face a two tank composition with heavy engage, no mobility ADCs can very quickly become a liability. Combined with the fact that Olaf is looking for side lane ganks, I would personally prefer to take a Caitlyn-esque ADC, providing much better kiting and survivability. Zyra is, however, my personal go to choice in this situation. You get to push a side lane, denying bottom jungle control to the Olaf, and you deliver very strong counter engage. Combined with the fact that TSM has been out of practice since before Miss Fortune appeared as a counterpick, it becomes the most solid choice I can think of for this situation.

The Zyra pick is very important in this draft, and TSM did very well in securing it as fast as possible. In a single movement, they denied all of the above exposed to the enemy team, while also getting a pushing side lane of your own, granting bottom jungle control when paired with the Zilean. To top it all off, her late game scaling allows her to shift into an AP Carry position, should the game last long enough,

I’m not sold on the Ezreal pick though. Back in 2014, as stated by former Gravity coach Nick “LS” De Cesare, TSM was at their strongest when playing a supportive mid and putting Jason “WildTurtle” Tran on a hyper carry. It must also be noted how strong the Zilean is for this plan, giving amazing protection to Ezreal, and covering for WildTurtle’s often reckless and aggressive play.

Still, it’s very hard to argue here against the Caitlyn pick. Not only would TSM secure absolute control over the early game bottom side, especially if UOL dared to pick the Miss Fortune, but you also have the Zyra pick to compensate for Zilean’s damage falling off. This makes it so that you don’t necessarily need to play a hyper carry. Caitlyn would not be as safe, but it would give you a stomping bot lane, thus outperforming the Jhin at absolutely every point in the game.

These two picks are incredibly greedy. Miss Fortune gives you lane advantage against the Zyra, but since Jhin won’t be a strong pick into TSM’s desired composition, this advantage will prove itself to not be very fruitful. Even worse, UOL was taking almost no counter-engage for the support, forcing them to greed it out in the other picks, and ultimately, losing the draft. A Nami pick would allow for more flexibility on

the mid choice, while also giving much needed ADC protection.

The Viktor, however, is where the real problem resides. At this point in the draft, TSM showed an early game pushing side lane that provides mediocre gank potential. Since UOL was looking to fight in the top lane, it is very likely that TSM was going to draft into a pushing mid laner and take the game from bottom side control, avoiding UOL’s brightest strength. It is true that Viktor provides very strong counter engage, but drafting him now is almost suicidal.

Viktor’s weak early game wave control, combined with how hard it is to save up for the first hex core upgrade, makes it so that Bjergsen gets complete dominion over what happens in the mid lane. While this strength is diminished by an early blue donation Lee Sin can provide, this was not performed proficiently at all. Not only did Lee Sin heavily overstep his limits on his early warding, but the mid lane was pushed in at this time anyway, completely under Bjergsen’s control, making this blue buff donation impossible. The forgotten Aurelion Sol or the Orianna, still sporting good counter engage, show a much better early game push that can match TSM’s, and fight over river control.

A few things remain to be said about these two. We already know how valuable Zilean’s push and ultimate is for this composition, and how the Zyra pick makes up for his poor scaling. As for the Poppy, I don’t believe this is as important of a pick to deny from the opposing team. Her ultimate provides heavy disengage, but, if TSM

chose to pick another tank, there are very few things UOL could do to avoid getting poked down by the Ezreal.

Getting a successful flank, taking both compositions into account, is by no means an easy task. It is, however, a very valuable pick for the American squad. Safe early laning, strong scaling and being the tank TSM needed to complete their draft makes this yordle a wise choice.

As we saw in the introduction, UOL saved every resource to give Vizicsacsi room to carry. While Kennen should at least be considered, I personally love this pick. Getting a Poppy counter-pick in lane, that allows for snowball, gives global pressure and can carry into the late game, which is all UOL can hope for when looking to control the game from the top side.

There is very little discussion to be made, as TSM completely won this draft phase.

Their smart composition around the Olaf, paired with recognition of Zyra as a key pick to secure for their plan, would already be enough. If we add to this how they tailored the strategy around what they wanted to ban and what the opposing team was looking to ban, they unquestionably take home the draft victory. However, I’m sure they would rather have taken the series victory.

Have any comments regarding this draft? We can be reached at @Cabramaravilla and @GAMURScom, and we are always thrilled to hear from you.

@Cabramaravilla is a freelance analyst and aspiring coach.