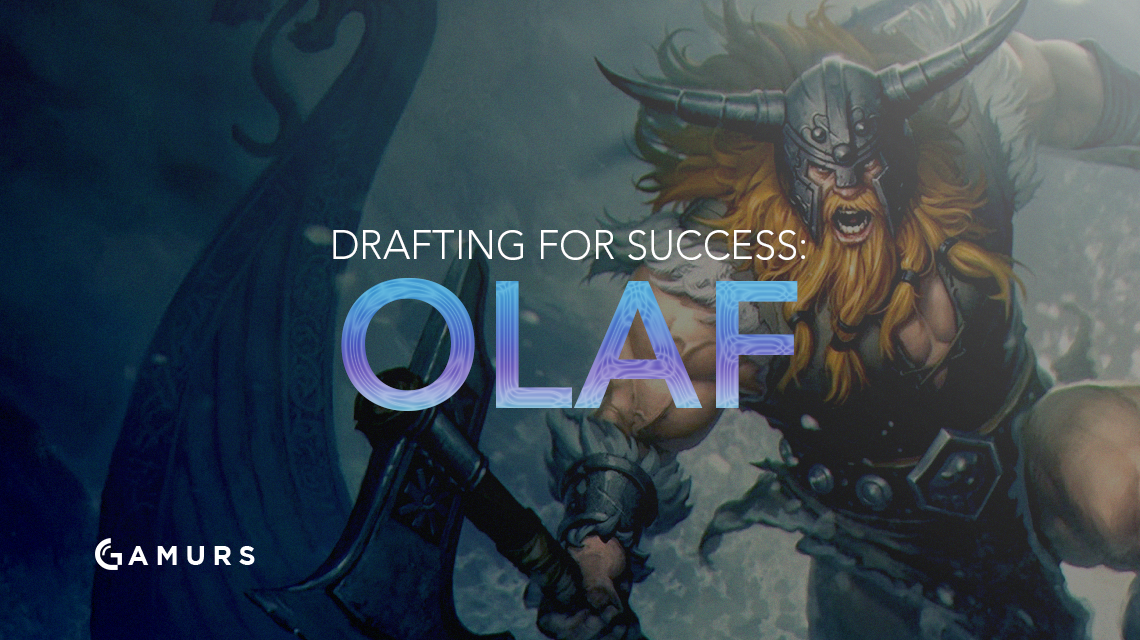 While it is, at the very least, naive to judge a team pick and ban phase without having inside information on the decision process involved, sometimes a pick or composition just doesn’t feel right, and one struggles to imagine how the team can reach such conclusions. In this regard, few picks are as big offenders as the Olaf, often drafted inappropriately or misunderstood, with various teams failing to realize how the game plan should be adapted to accommodate the pick. I hope this article can give the readers a better idea on when and how Olaf can make sense on a team composition.

Olaf is, above everything else, an early game jungler, and he should be played as such. His raw power at the start of the game gives him a good chance to snowball, and if he achieves said snowball, he can run away with the game. Olaf is a champion of absolutes. If he gets to the point where the opposing team can’t kill him, there is no real way to deal with him until the late game. Olaf can become immune to cc, tanky and deal too much damage on your carries to ignore. All this makes it so you either have to burst him or run, since the more damaged he, is the more damage he obtains from his passive and the more he heals with his W, making sustained damage not the best option. This fact is exaggerated in the current meta because of the lack of dashes in both the meta mid laners and AD Carries.

It can’t be ignored that Olaf is a decent side lane ganker. Bringing both damage and soft cc, his axes are best during long chases. For this to work, he has to be paired with gankable side laners. If your comp is Poppy, Sivir, Karma, Olaf and some mid laner, he clearly has little to no business in these lanes. While he is decent, he is not the best ganker by any means and, if ganking side lanes is the game plan, the side laners must have good assistance for him to succeed. If this is the case, it’s a very good scenario to get his snowball rolling.

As if the previously stated point wasn’t enough, Olaf is a very scary invader. The jungle gives his axes many chances to shine, while also having the enemy jungler run through narrow corridors, making them easier to land on the fleeing opponent. Since few junglers can fight a healthy Olaf in the early game, they will usually be forced to run and surrender control of the invaded portion, unless they want to face his monstrous early game raw stats. His true damage E helps you secure camps and objectives over the opposing jungler, and this is certainly no joke.

If your plan is invading and camping the enemy jungler, your team should look to build a compositions meant for pushing all lanes. Having your opponents under tower and control over one side of the jungle gives you free rein to get chip damage on first tier turrets, steal enemy camps and deny minions, all while gaining information of the enemy jungler’s position.

Overall, these are two pretty solid early game strategies. All is well and good if we ignore the problems, but problems do exist, so let’s get on with them.

What makes Olaf a bad decision

As we previously stated, Olaf is a champion of absolutes. This is no joke. If Olaf gets behind, he starts to negatively snowball at very dangerous rates. His absolute lack of dashes, combined with no hard cc and melee range, means that if you are playing Olaf and the enemy team can burst you down without heavily compromising their resources, you are done. Unless some out-rotating or flanking shenanigans happen, you will most likely become useless in team fights, relegated to being a piece of meat where people warm up for the real punches they will hit your teammates with.

Even worse, Olaf suffers heavily the longer the game drags on. If Olaf just keeps even, he will get outscaled by every meta jungler if the game reaches late game. Olaf is not very good when he has a lot of gold; he is very good when he has more gold than his opponents, where the aforementioned passive and W make him an unstoppable meat grinder.

Because Olaf can only do something if he reaches his enemies, he suffers when played as the only tank. Approaching the enemy team with no other threat by his side makes it much easier for the enemy team to burst him out of the team fight before it even starts. This is especially true if picked into Trundle, whose pillar and ult make Olaf’s life a living hell, and if Olaf is the only tank on the team, it becomes the most unspeakable of nightmares.

Adding to all of this, Olaf really is a very poor mid lane ganker. Soft skillshot cc and having to take the time to reach the enemy to do anything means that, more often than not, his ganks will have little to no threat of killing or even taking an enemy summoner spell. This is the toughest lane to surrender, since the mid tier one turret is by far the most valuable tower to take. If the mid matchup is one that will need heavy attention from junglers, Olaf is not your viking.

Ironically, even when he is an excellent invader, he is also pretty bad at being invaded. His kit only allows for fast clears, but only if you can stay at relatively low health, which combined with his lack of flash, makes it so that often times we will see a Lee Sin or Elise solo-killing Olaf. This is bad on two fronts. First, it gets Olaf’s negative snowball going. Olaf is possibly the meta jungler that is most heavily punished from being killed in an invade. Secondly, since Olaf has no real pressure over mid, the opposing team can pick a pushing side lane with less posibilities of having it punished than they usually would. Even with how bad this sounds, because of Olaf’s strengthes, one should be wary when invading him. If the opposing jungler is found invading a healthy Olaf, he is at risk of simply feeding him a kill and starting his snowball.

As a last point, one should be wary of picking Olaf into a composition with good kiting tools, as Karma or Sivir can bring. Once Olaf’s ult runs out, he is done and he will most likely never reach the carries, so securing ways to get him to the opposing team is essential.

When should Olaf be picked?

Even when he has exploitable problems, you will very rarely find yourself at a point where you can avoid all of Olaf’s weaknesses. He is inherently a risky pick, even when the risk is not obvious, since all you see is a useless meatball in the late game, and the usefulness of damage absorption is harder to judge than just seeing a carry champion do no damage. He still is, despite all of his flaws, a strong meta jungler, that can keep you in the game long enough for your composition to scale or run away with the game. Just please remember to pick him with an idea in mind and try to do something with the pick. Please.

Do you agree with this Olaf analysis? When do you think he should be picked? Let us know at @Cabramaravilla and @GAMURScom.

Credit for the image to leagueoflegends.com