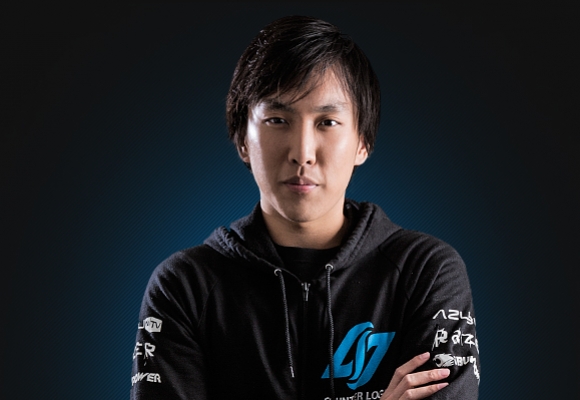 “If you are afraid of failure you don’t deserve to be successful!” – Charles Barkley, 0-Time NBA Champion and one of the greatest power forwards of all-time.

Championships are a staple of conventional sports discussion, a trope that has rightfully migrated to e-sports. It’s hard to call a player the best if they’ve never won anything. Sadly, today’s disappointing series against Gambit Gaming represented the best chance Doublelift has had in nearly a year to achieve that elusive LAN victory. Although his career is far from over, it seems unlikely that another great opportunity will present itself before the legendary AD Carry hangs up his mouse and keyboard.

As Doublelift’s career has taken a sharp downward trajectory during Seasons 3 & 4, I see more and more fans harshly criticizing a player I consider one of the best in League of Legends history. If CLG’s star AD Carry never wins a LAN, it’ll be a black mark on his legacy, but it should never overshadow a truly unique career.

I want to make this statement right from the start: If Doublelift places dead last place at every single LAN from here on out until the end of his career, he will still go down as one of the greatest players in the history of the game.

In Season 2, Doublelift reached peaks that no North American player has ever touched. At his peak, Doublelift was the best in the world at his position and truly capable of single-handedly carrying his team in any given series. Furthermore, every team in the world knew what a threat Doublelift posed. Teams came into each and every game planning to camp bot lane and dive Doublelift in teamfights. To make matters worse, CLG never truly embraced the “Protect the Doublelift” mentality, meaning that even though Doublelift received a great deal of extra focus, he rarely got addition peel from his teammates. Any fan looking back to a classic CLG game will see a whirlwind of action, and Doublelift at the center of it all. The Ezreal flying back hitting every single skillshot, the Vayne tumbling past an entire body of opponents only to turn around and slay them all, the seemingly untouchable Caitlyn disintegrating her opponents from an impeccable position. Every single CLG teamfight was a Doublelift public performance piece in snatching victory from the jaws of defeat. Throughout Season 2, Doublelift played every lane and teamfight on the highest possible difficulty, knowing that his team would live and die by his success, and succeeded much more often than not.

In Season 2, only World Elite’s mighty WeiXiao could be compared with CLG’s superstar, and his out-of-this-world synergy with Chauster meant that nobody could match against them in lane. To make matters worse, the legendary Doublelift-Chauster bot lane would frequently run weak laning AD Carries like Sivir or Vayne and no combat summoners (so they could take TP promote) in an attempt to carry for the late game. The “Chaulift” bot lane’s lane dominance is something that we will probably never see again in competitive LoL.

After Season 2, Doublelift’s skills have admittedly waned. Comparing Doublelift to Chaox was always a somewhat laughable comparison, but he received legitimate rivals in Seasons 3 and 4 as his skills declined and a new group of young talents rose to challenge him. But even after Chauster retired from competitive play, Doublelift was able to rebuild a special level of synergy with former rival aphromoo. Once again, Doublelift was able to thrive through the staples that have defined his bot lane play: a high level of coordination and determined aggression. His outright dominance may have waned, but Doublelift was always in contention for the best in the region.

Doublelift’s consistency is extremely uncommon (the only fair comparison in North America is Curse support Xpecial and TSM top laner Dyrus.) No matter happens for the rest of his career, Doublelift will always be an icon, arguably the foremost icon, of North American League of Legends.

Jerry West is one of the greatest NBA players of all time. The shooting guard’s competitive spirit and ferocious knack for hitting clutch shots gave him the nickname “Mr. Clutch” (a nickname many other players have tried to appropriate – he was the original.) In spite of this, Mr. Clutch failed to win an NBA title in his first 7 tries. Much like Jerry West, Doublelift is still an incredibly clutch player in spite of his failures to win it all.

During his prime in Season 2, Doublelift was often able to snatch single games from stronger teams, a quick glance at prior results will frequently show 2-1 series against titans such as Moscow 5 or CLG.EU. Frequently, Doublelift was able to outduel his AD Carry opponents but was unable to fully secure the win for his team. As his career went on, Doublelift too often found himself on rebuilding squads that held the promise of the famous “CLG potential” but were never able to deliver the needed results. To make matters worse, these squads would crumble in the clutch and fall back to the classic “Protect the Doublelift” strategy in the hopes that Doublelift could magic a victory out of thin air. In fact, Doublelift’s play during these troubling times should be lauded rather than criticized. During CLG’s darkest times, he was often the only thing keeping them in the playoffs in the first place (or, in the case of the series against Curse Academy, the LCS in general.)

At the same time, fans and even analysts are bizarrely obsessed with holding Doublelift to the mistakes of his youth. Every time Doublelift is seen farming or split pushing on a champion, the casters act like it’s a bad thing. While he does occasionally gets caught our or fails to group fast enough, most of the time he’s just doing what AD Carries are supposed to do: farm up for the late game. Likewise, the myth that Doublelift insists on a “Protect the Doublelift” style is somewhat preposterous. On his best teams, the “original” line-up with Saint and the MonteCristo rotation-heavy Spring split squad, Doublelift was extremely comfortable falling into a supportive playstyle. In this respect, he is much more like an imp than an UZI. For a long time, imp was similarly criticized…and then he found better teammates.

For a player who has played over 4 years and is famous for an aggressive playstyle, it’s extremely telling how rarely he is individually outplayed. His team has never been truly upset in his long career and he has frequently pushed his rivals to the brink of defeat before ultimately falling. It’s true that Doublelift has never won a LAN, but it’s not because he choked or played poorly: he has simply never entered a tournament as the obvious favorite.

For a player who has long been criticized for his refusal to play certain champions (most notably Miss Fortune and Draven when they were most dominant), Doublelift has always excelled on a very wide variety of champions.

Caitlyn, Vayne, Ezreal – Doublelift’s alternate holy trinity of carries has to be brought up any time his champion pool is mentioned. Doublelift has done amazing things with all three of these characters (scoring pentakills in competitive play with all of them) and  his most stirring performances (MLG Fall Championship 2012, IPL5, All-Stars 2013) have all come on these characters. Just yesterday, he nearly carried CLG and earned his first LAN victory on Vayne and Caitlyn. His skill on these characters may no longer be the best, but he was the first to play them, and his name is still synonymous with these characters among the League of Legends fanbase.

For all the praise that his rival Genja gets for innovation, it was Doublelift who has made the largest impact on how the AD Carry role is played. In a time when players were unwilling to move away from the holy trinity of Corki, Ezreal, and Graves (Ironically, Doublelift pioneered two of those champions himself) his constant Vayne and Caitlyn picks were a breath of fresh air. Today, both champions are staples in competitive play and favorites of some of the best AD Carries in the world (UZI, imp, etc.)

Urgot – To bring out a Dragonball Z comparison, I’ve always thought of Doublelift’s Urgot as his Zarbon ugly form. He hates playing the champion, he thinks that it’s boring and ugly, but he always seemed to bring it out and succeed with it when the stakes were highest. His Urgot play at OGN and All-Stars completely caught opponents off-guard and he was able to completely smash his opponents with the Headman’s Pride. Even though he hasn’t brought out the champion in a while, Doublelift probably remains one of the best Urgot players in the world and one of the pioneers of that champion after his original popularity waned.

Graves – The forgotten member of Doublelift’s “original” champion pool, Graves isn’t a character that Doublelift innovated, but his play on that champion has always remained impeccable. Whereas most Graves players struggle with his lack of range, Doublelift has always excelled at weaving in and out of teamfights to maximize the character’s damage. With Graves’ recent resurgence in popularity, Doublelift was one of the first to advocate for the champion as a Lucian counter (ironically, he would get completely crushed by P1noy’s Graves as Lucian in the first game of the finals.)

Sivir – Another champion Doublelift has been great on since Season 2 that fans always forget about. His use of Sivir during Season 2 (and her attack-speed boosting ultimate) would draw bans throughout CLG’s Regionals and Worlds run and his ability to play such a weak laning champion vs. lane bullies like Graves or Corki was an accomplishment in and of itself. Fans rightfully praise Cpt Jack as the best user of her Spell Shield spell, but Doublelift was never far behind. His Sivir was also extremely effective on the revitalized Spring Split 2014 CLG. His ability to siege towers on a 500 range champion was eye-opening.

Furthermore, any in-depth Doublelift interview will feature a discussion of laning fundamentals, a concept that seemingly he alone feels comfortable talking about. A quick look at Season 1 or early Season 2  bot lanes shows a bizarre sight. Supports would seemingly AFK in the bush for experience as AD Carries passively farmed. Chauster and Doublelift’s coordinated attacks may seem basic to today’s viewers, but they forever changed how the bot lane was played. Concepts like harassing opponents as they last hit creeps, attacking the same person as your support, and going all-in for kills were almost entirely foreign concepts before Doublelift and Chauster united on CLG. To this day, countless rising stars admit to copying Doublelift throughout their development. UZI’s philosophy of contesting every single creep is simply an extension (arguably a perfection) of concepts Doublelift pioneered many years ago.

Doublelift’s tremendous impact on the game cannot be understated. Maybe he hasn’t won a LAN so far, but his students have won almost all of them.

If this tournament showed anything, it proves that Doublelift still has it. He basically willed CLG back from a 1-0 deficit against ROCCAT (with a big assist from ZionSpartan’s Jax) and, aside from a horrendous Game 1, played an all-time great Doublelift series in the final.

In many ways, Doublelift’s whole career story has been like a fairy tale. He ran away from home with big dreams and became a globally recognized superstar. Only time will tell if he’ll find the storybook perfect ending to his career, but regardless of what happens, he is, and always will be, a legend.