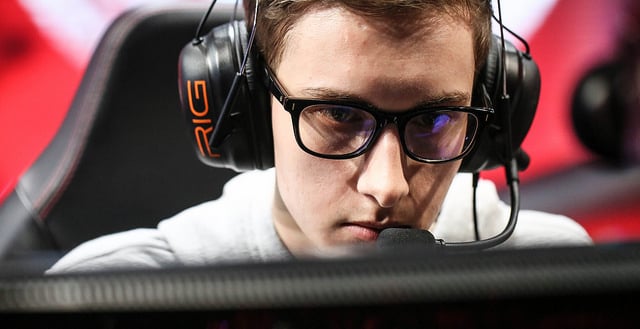 Suffering from the withdrawal of no Worlds matches for three days, I wanted to look at the damage dealt statistics to champions thus far through the Group Stage. While total damage dealt to champions provides some insight, the values are dependent on the number of fights, length of match, etc., so I also charted the percentage of team’s damage dealt by each player. Here are some of the insights I have found.

The King of Carries

Since taking over the mid lane and role of shot-caller for Team SoloMid, Bjergsen has faced unrelenting pressure and extraordinarily high expectations. In the Legends Rising episode “Kings,” shoutcaster Quickshot proclaimed, “In a 1v1 scenario, he is the best player in the world.” Thus far on the 2015 World stage, Bjergsen is proving that Quickshot’s bold statement may not be far off.

Through the first three matches of the Group Stage at Worlds, Bjergsen is in a league of his own. Of the 81 participants at Worlds, the TSM mid laner holds the top spot for total damage dealt and percentage of team’s damage dealt.

He is the only player so far to do more than 80k total damage while also dealing 44.8% of TSM’s damage. That is nearly half of his team’s damage by himself… If you want to talk about carrying, Bjergsen is doing so in the truest sense.

Unsurprisingly, both TSM Dyrus and TSM Santorin rank at or near the bottom for their respective positions in the two categories. Perhaps TSM’s Achilles heel is that the team relies too heavily on its star mid laner. The rest of TSM will need to step up their game if TSM hopes to advance out of Group D.

Most underrated player of tournament…

Don’t let the nerdy glasses or his unimposing figure fool you. C9 Incarnati0n has been a force on the Rift at Worlds.

From the Hai’s return from retirement to the improbable Gauntlet run and Diamond 2 memes, Cloud 9 has consistently grabbed headlines in the last few months. While his teammates have been at the forefront of the attention,  Incarnati0n has quietly flown under the radar after receiving the brunt of the criticism for Cloud 9’s struggles during the NA LCS Summer Split.

While much of the credit for Cloud 9’s shocking 3-0 start in Group B has been attributed to Hai’s shotcalling, Sneaky’s consistency, LemonNation’s picks and bans, and Ball’s Pentakill, Incarnati0n has been Cloud 9’s carry with his Veigar and Azir play.

With 74.8k damage dealt, Incarnati0n has contributed 38% of C9’s total damage, which ranks him 5th among all competitors in both statistical categories, putting him the same conversation as TSM Bjergsen, CLG Doublelift, KT Arrow, and OG xPeke for best carry thus far in the tournament. That is impressive company.

To top it all off, Incarnati0n currently has the most damage dealt in a single match by a single player in the tournament with his tremendous 39.2k performance on Azir against IG. Not bad for a player whose abilities were doubted during Cloud 9’s struggles. After the first week of Worlds, Incarnati0n has proven why he was highly sought after by C9 and why he earned rank #1 in EUW solo queue. Opponents will definitely be targeting him during picks and bans in Week 2.

ADC-centric playstyles. Both CLG and KT have relied heavily on their ADC and less on their mid to provide damage. While Doublelift and Arrow are the top ranked ADCs in terms of percentage of team damage at 40% and 39%, their mid laners are ranked dead last at their position. Pobelter has dealt just 21% of CLG’s damage, while KT Nagne has dealt an astonishingly low 18% of KT’s damage, which is more on par of an average top laner thus far at Worlds. If opponents want to have success against CLG or KT, shutting down their ADC is key.

Strength of balance. With a perfect record after Week 1, SKT has shown that having a hard carry is not absolutely necessary to have success at Worlds. Even with Faker, arguably the best player in the world, SKT has been one of the more balanced teams thus far. In fact, Bang is actually leading the team with 31% of SKT’s damage, while Faker has 29% and MaRin has 22%. Having three legitimate threats to carry is why SKT is still one of the favorites to win Worlds.

LGD’s struggles. The combination of LGD TBQ’s sickness and getting targeted during picks and bans clearly affected his performance in Week 1 as he ranked dead last among all junglers in damage dealt. His 15.6k damage to champions is actually less than six supports thus far at Worlds, including his own support Pyl. In fact, Pyl leads all supports in both categories with 26.7k damage for 14% of LGD’s total damage, largely due to his Game 3 effort on Brand against TSM. But, that still was not enough to help LGD avoid a 0-3 start in the “Group of Death” and what will likely be an early and disappointing exit for the LPL champions.

Top lane emphasis. Interesting coincidence that the 3 LCK teams at Worlds: KOO, SKT, and KT, all have top laners ranked highly in percentage of team’s damage dealt. Perhaps this is due to regional playstyle, or it may speak volumes of the individual talent of Smeb, MaRin, and Ssumday.

BKT didn’t stand a chance. Given a difficult group draw that included SKT and EDG, the Bangkok Titans, who secured one of two wildcard seeds, have been completely overpowered so far at Worlds. As a team, BKT have dealt a mere 112.6k damage to enemy champions in their three losses. To put that in perspective, the other 15 teams have averaged 188k damage dealt so far at Worlds, and the Flash Wolves dealt 101k in one match alone. It may be safe to say that BKT will not pull off a Kabum this year.

FW have been in some bloodbaths. Speaking of whom, the Flash Wolves unexpectedly lead all teams in damage dealt through Week 1, which was spearheaded by their poke composition against KOO. Maple’s Gangplank and NL’s Varus dealt an outstanding 34.4k and 31.6k, respectively, to earn a decisive victory over KOO. Unfortunately, the total damage dealt hasn’t translated into more victories for FW, but they have definitely earned the respect of Group A.

More to learn. Ultimately, three matches is not a large enough sample size to solidify tendencies, but it does provide a glimpse of how teams differ in playstyle and philosophy. It will be interesting to see how teams will adjust and adapt in Week 2. For the source of all the data gathered, click here.