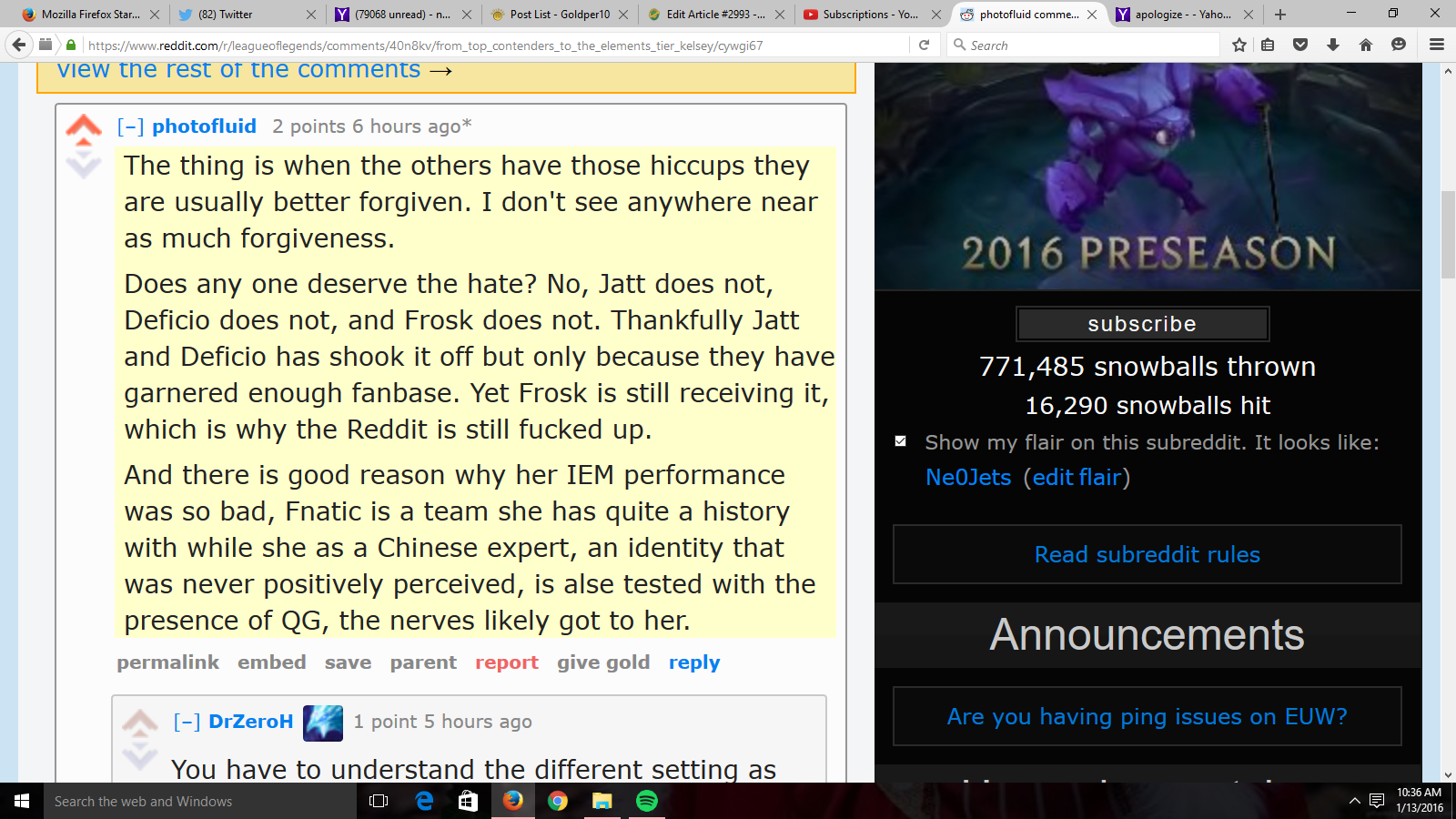 This was out of a Kelsey Moser’s Eu article and somehow people started pouring out hate towards Froskurinn. This comment talks about how people are not willing to overlook mistakes made by some ,but quick for others. The comment also mentions how no one deserves the hate which is true. He also admits that the LeagueofLegends Reddit is still screwed up. Examples of hate is everywhere on League sub Reddit and the community needs to do something about that.

Hateful comments run rampant on reddit, twitter, and twitchchat. The receiver of these comments are players, coaches, owners, casters, content creators, and journalists the target is anyone and everyone.

I am really tired of going into threads that have nothing to do with LPL or me and reading comments that attack my character.

This is just one of many examples of people in the scene that is tired of the community constant onslaught towards them.

Memes are sometimes not coming from a mean place the person may just want to be funny. The truth is you really don’t know the person or what they are going through. People in the scene are forced to deal with these constant jokes which compound into something bigger. Content creators have stopped creating for leagueoflegends before, and more will if something doesn’t change. Everyone isn’t built the same way, everyone isn’t quick to put things behind them. Thick skin isn’t something that should be a requirement to do things in this community.

1.5 yrs ago i wrote an article about Nien and toxicity against the pro’s many players spoke out against abuse on social networks. He also mentioned how the abuse affected him mentally. We don’t want things to go overboard for change to finally be established. Will it take someone to commit suicide to realize that words do hurt that someone may be at their breaking point. I hope it doesn’t come to that and doing nothing while ignoring the problem will never solve the issue.

My heart is sicken by the gross nature of the Leagueoflegends community ,and everyone needs to examine themselves.

Micheal Jackson sang a song called Man in the mirror some lyrics were.

Are we changing the world well we are changing our world, and changing what we love for the better.

If we looked in the mirror, if we started with ourselves, if we were an example of what a good healthy community looked like.

Healthy criticism is fine ,but that isn’t what is being shown to most people in our community. We chased some great people away everyone doesn’t have thick skin. The society of its just a joke or its just a prank isn’t an acceptable excuse.

My call to action is for the individual to examine yourself and be positive towards others in the community not negative towards everything that moves.

We can make this community great it only takes one then another to change. Change starts with you the Man in the mirror.

I personally would like to apologize to LPL casters/analysts who i have meme’d in the past and thought nothing of it. Also I apologize to @gosickboy a content creator that i was very angry about for things he did at the end of 2014. Verbally harassed him on twitter over the events.

I have looked in the mirror now i ask the community will you do the same?