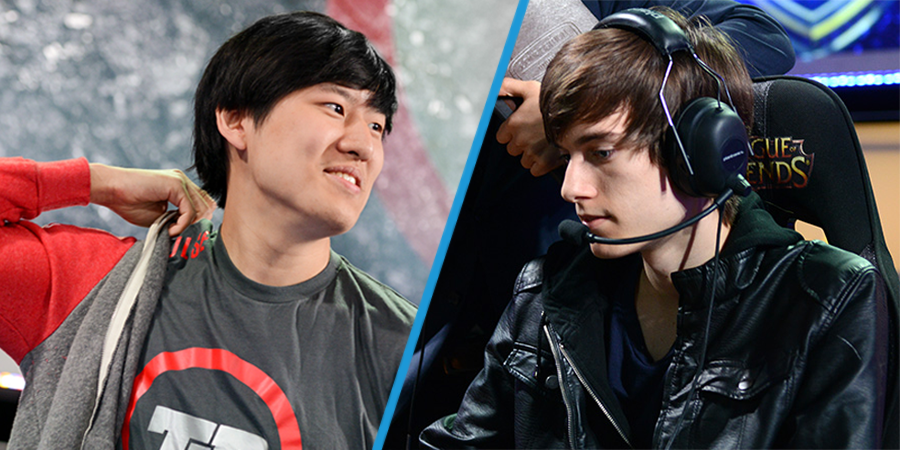 The League of Legends off season is a time of uncertainty and change for many professional teams around the world. With the recent roster overhaul of one of North America’s oldest organizations, Team SoloMid , and the loss of Counter Logic Gaming’s star AD carry, it is extremely difficult to predict who the top team will be in the North American League of Legends Championship Series (NA LCS) in 2016. In the meantime, following their announcement for Support and Jungler tryouts, Jack Etienne, owner of Cloud9 teased fans with tweets giving away clues about the new members of the team. After much speculation, the two players have been revealed as Lee ” Rush” Yoon-jae and Michael ” Bunny FuFuu” Kurylo, formerly of Team Impulse (TIP) and Gravity Gaming (GV) respectively.

Taking the place of Hai “Hai” Du Lam is the strongest mechanical jungler the NA LCS has ever seen. Before his debut in the league, Rush was a relatively unknown talent in the west. In truth though, this was a player that had reached rank #1 in Korean solo queue. To understand why this is such a big deal, one needs to only look at the players that are on the top of the Challenger rankings. A large majority of these players are professionals. When looking for people to recruit, coaches often scout players out in Challenger. Knowing this, players try their hardest to reach the top of the rankings in the hope of being noticed, in turn creating a much more competitive environment. Rush was able to beat out players on teams like SK Telecom T1 and Edward Gaming not once, but on multiple occasions.

Once Rush joined TIP, he was able to showcase his talents to the west in an explosive fashion. Though he had a lack of professional experience coming into the spring split of 2015, the former World Champion and top laner of the team, Jung “Impact” Eon-yeong, helped him get more comfortable in the setting. With the experience of Impact and the playmaking ability of Rush on strong early game champions like Lee Sin and Nidalee, TIP was a force to be reckoned with. Unfortunately their mid lane player, Yu “XiaoWeiXiao” Xian, was suspended for elo boosting right as the team was coming together in the second half of the summer split.

With Rush now making his transition to Cloud9, the main question that is on the minds of fans and analysts alike is, “will C9 have a repeat performance of the 2015 Summer Split or will they reclaim their thrones as the kings of North America?” One thing to consider is that when Rush was on TIP, he had the benefit of speaking the same language as Impact, which made it easier to work along with and snowball the top lane. Now that he is working with an all English speaking roster, he might have trouble communicating more nuanced idea with the team. Despite Rush’s strength on aggressive junglers in the early game, he has a tendency to make overly aggressive plays and get himself killed.

This type of behavior might be amplified by the lack of clear communication between him and his new teammates. One must also take into account that An “Balls” Van Le’s performance has slowly been on the decline for the last year, with his present state being nowhere near that of Impact’s. The only saving grace this time around is now Hai will be present to help guide Rush and help him become more accustomed to playing with the team. If there is anyone that is capable of unlocking the full potential of a player, it is Hai.

While on the topic of Hai, it is important to highlight his role swap from the jungle to the support position and the potential effect it will have on the team dynamic. It was well known before the off-season that Daerek “LemonNation” Hart planned on retiring following the 2015 League of Legends World Championship. Given that knowledge in advance, Cloud9 had ample time to find a replacement for the support position. But even with the recruitment of Bunny FuFuu, the starting support and former shot caller of Gravity, the Cloud9 organization is not willing to take the same risk they did at the beginning of last summer. When Nicolaj “Incarnati0n” Jensen replaced Hai in the mid lane, the team no longer was a cohesive unit. In the words of one of their players, they were like ” headless chickens“, playing the game without a clear sense of direction. As a result, Bunny FuFuu will not be the starting support.

Though the decision is understandable, it is concerning to think that C9 might never be able to function without Hai on the roster, especially after he has said on multiple occasions that he wants to retire. According to C9’s management, the plan is to initially have Hai rotate from the jungle to the support position. This will give Bunny FuFuu the time he needs to become accustomed to shot calling for the team in a more controlled environment while practicing. As the team becomes more accustomed to his shot calling, Bunny FuFuu will be put on stage instead of Hai. The arrangement is most likely to avoid the slump that befell C9 the last time Hai left the team.

The former GV support is no slouch when it comes to leading and shot calling a team to victory as was evident by the team’s six game winning streak in the middle of the summer split.. But there are very few players in the world that can boast the leadership skills that Hai has. At the same time though, Hai not a career support player and this will be his second time swapping roles on Cloud9. This is where the expertise of C9’s new support comes in. Originally Bunny FuFuu was a part of Curse and then Curse Academy, and though his play fell under the radar, veteran player and teammate Brandon “Saintvicious” DiMarco praised him as potentially one of the best supports in the North American region.

Even before his debut in the NA LCS 2015 Spring Split Bunny FuFuu surprised a lot of people with his extremely good Thresh play. Though questionable, his mastery over the champion had people calling him a god due to his predictive “Death Sentence” usage. Despite his exceptional Thresh mechanics one of the main weaknesses of Bunny FuFuu, especially in his first professional split was the fact that he did not perform anywhere near as well on other champions as he did on Thresh. In the regular season of the spring split he had an impressive 100% win rate and a 9.4 KDA over 5 games with Thresh. The next highest win rate with champions played more than once was Morgana with a 57.1% win rate and 4.1 KDA over 7 games. Though respectable stats, it showed a clear weakness in his champion pool diversity.

In the summer split of 2015, Bunny FuFuu worked on this weakness and more evenly distributed the amount of games he played on different champions. He increased the number of champions he played three or more times from 3 to 5 from the spring to the summer. But what is important to highlight is that he had a win rate of 60% or higher on all but Braum in the regular season of the summer split. The improvement that Bunny FuFuu showed in just one year of playing professionally is promising for the future of Cloud9. With the help of a seasoned support in LemonNation and a brilliant shot caller in Hai, Bunny FuFuu has the potential to one of the best if not the best support in NA.

The Evolution of Cloud9

The last year has been a very rocky one for the once undisputed kings of North America. No longer was the team able brush their opponents aside with little to no effort. At first it was just a minor road bump with a poor performance at the IEM World Championship in Katowice. But after losing out to Team SoloMid in the finals of the NA LCS 2015 Spring Playoffs the organization knew that changes needed to be made if the team wanted to maintain their reputation as a top team. The retirement of Hai looked like the first step towards that goal but as we know now, the team depended on Hai far too much to make decisive plays. Once he stepped back into the ring, Incarnati0n was able to play more comfortably and bring out his mechanical talent.

With the introduction of both Rush and Bunny FuFuu to the team, Cloud9 hopes to once again use the strengths of Hai to integrate the new players without the growing pains that they felt in the summer split. The question now though is, “Will Cloud9 ever be able to function without Hai?” It is a scary question but one that needs to be addressed if the team is ever to evolve. There is also the question of whether or not the leadership skills of Hai will outweigh his lack of experience in the support role. On the bright side, the jungle and support positions are the most similar in the roles they fulfill in the early game. This is due to the nature of lane swaps, which makes the learning curve less steep than if he were to come straight from the mid lane. Assuming Cloud9 is voted in, the first chance that this new roster will have to show their mettle is at IEM Cologne where they will face ESC Ever, the champions of the 2015 KeSPA Cup.