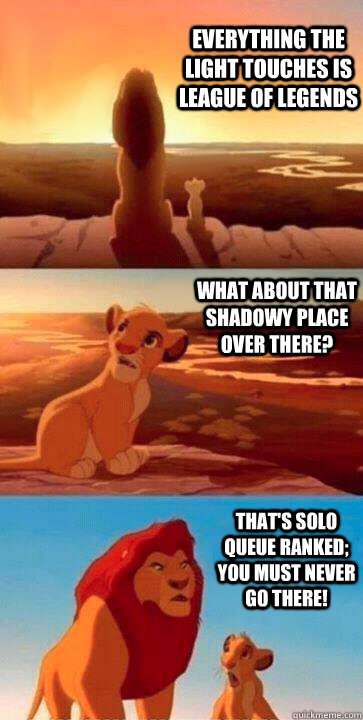 Climbing the ranked ladder is a daunting task for most of us. Seemingly rife with trolls, feeders, leavers, and other malcontents, playing ranked queue is a drastically different experience from queueing up with friends in normals. There are some that avoid ranked queue completely, content to play normals for all time. Some of us however cannot resist the challenge of the ladder, the thrill of the competition, where winning means something, even if it’s only gaining points on an invisible ladder of self-loathing.

Playing your placement matches for the first time is a terrifying rollercoaster ride as the client does its best to match you with players a of similar skill level. A small few are inherently lucky and get carried into a higher division by the grace of the queue gods. Others are seemingly cursed to suffer through game after game of feeders and trolls, being placed into a division we’re ashamed to even say out loud. Fear not. There are champions who can help you claw your way out of this troll’s paradise. This is the first in a series of five articles where I will outline a single champion per role to climb your way out of the pit that is Bronze.

Now please keep in mind, I am not simply saying ‘play these champions, get freelo’. As much as I would like this to be the case, all champions take some measure of skill to play and a firm grasp of core mechanics. The goal of these guides is to explain how a person with solid core mechanics can positively affect the game using certain champions.

In my eyes, Sivir is a god of bronze and silver tier. Her strengths take advantage of many of the common weaknesses of players at this level. While she does lack a reliable escape, the strengths of her kit greatly outweigh the weak points in it. Let’s take a look at the different parts of her kit and why they are so valuable.

Sivir gains bonus movement speed for 2 seconds after damaging an enemy. This includes both her auto attacks and her abilities.

With her lack of reliable escape, this ability emphasizes exactly what you should be doing when those tanks are diving you. Kite. Kite. Kite… Kiting, or orb walking, is the act of auto attacking, then immediately clicking to move after the attack is in the air. This move command acts as an animation cancel that allows you to move away (or toward) whoever you are attacking quicker than if you waited for the animation to finish by itself. This skill takes some practice but can be easy to get down after a few bot games. The bots are more aggressive than the average player. Whenever a bot moves to aggress on you, practice your auto-move-auto-move commands until you can get it down reliably. Kiting is a skill that is not restricted to AD carries and will be useful for any ranged character you may play.

Sivir throws her crossblade in a target direction which then returns to her, dealing physical damage each time an enemy is hit. This damage is reduced by 15% for each subsequent target to a minimum of 40%.

This ability is pretty straight-forward. It can be used effectively for trading in lane as well as for wave clear at later stages in combination with her W ability. It does cost a good chunk of Sivir’s mana pool, so try not to use it unless you are sure to hit. At a mana cost of 70 per use at level one, four skill shots will leave you drained and defenseless. One thing to note about this ability is the fact that it will return to Sivir if she’s dies mid skillshot. This may not sound extremely significant, but with the right timing it’s the difference between a one-for-one trade and your opponent escaping with single-digit health.

As another note for anyone farming in lane, the best time to harass at low elos is when your friendly cannon minion is about to go down. Players in Bronze and Silver often tunnel on the cannon minion and will take unnecessary damage in order to secure it. While the cannon is worth a good chunk of gold, you can easily turn your opponent’s greed into an advantageous trade for you, which can lead to an easy kill or a summoner spell blown if your jungler comes around or if you have the right support player and a little bit of communication. Watching the health bars of the enemy minions along with the health bars of your own may take some getting used to, but is a skill that can be very useful for favorable trading.

This is one of Sivir’s best abilities in my opinion because it has so many uses and applications. It gives her excellent waveclear at later stages of the game, enables favorable trading in lane, gives free harass, and allows for taking towers quicker.

During the laning phase, her W is useful for several reasons. One thing to note about this ability is that the cast resets Sivir’s autoattack timer. Complete an auto-attack and cast this ability immediately after the auto is in the air to cancel the rest of the auto-attack animation and immediately begin another. With the subsequent attack speed buff that the passive on her ultimate gives, this allows for excellent trades with your lane opponent. Also watch for when your opponent is farming in the minion wave. You can activate your W and last hit minions while still doing ricochet damage to your lane opponent. Free harass is never a bad thing. This also makes Sivir a monster in close-quarters teamfights where she is able to do AOE damage with her auto’s.

Ricochet also provides excellent wave control. Wave control is something that many struggle with in Bronze and Silver. Even if you are paying close attention to your waves, it is nearly impossible as a single person to keep all three lanes in a favorable position. Minion waves apply pressure and open up opportunities to make plays. When a minion wave pushes toward your tower, it opens up small windows of opportunity around the map. For example, if Baron has just spawned and the enemy team was able to push the bottom lane wave before grouping for baron, this leaves your team at a disadvantage. If you choose to send one person to clear the wave, a smart enemy team will immediately engage on baron or on your own team because of the numbers advantage they have. If you choose to group and fight at baron, this leaves the minion wave free to push and damage or potentially destroy a tower.

With Sivir’s W, once mid-game rolls around, a single Q through an approaching wave combined with a ricochet-enhanced auto or two will clear the wave almost instantly. This allows Sivir to prevent tower seiges or deal with a pushing wave quickly in another lane before rejoining her team for a teamfight. With Sivir’s clear speed, by keeping track of at least two lanes and making sure that they are pushing before moving to objectives, you can create pressure on other parts of the map, opening up opportunities for your team in the future. It also allows for fast farming of lanes and jungle camps to catch up after a crappy laning phase.

Sivir blocks the next enemy ability used on her in the next 1.5 seconds and restores mana upon a successful block.

This ability is Sivir’s ‘get out of jail free’ card. It covers up the player’s positioning issues and allows Sivir to stay safer during trades provided you’re able to watch and predict multiple champions at once. At this elo, proper positioning is a constant struggle. If you find yourself in the wrong place at the wrong time, like when you failed to see that last minion between you and the enemy Thresh was about to die, just press E and stroll away. Mind you, at its first level, Spell Shield is on a 22 second cooldown, so hopefully you can keep your positioning in check for that long. It’s also important to note the shield will only block one ability, or multiple abilities within a very small time window. Any other CC or skillshots cast after the initial shield will land.

The mana restoration on a successful block gives Sivir a bit of mana sustain to make up for her small mana pool. If you are able to successfully bait out enemy skill shots, you can easily turn this into an advantage by outsustaining and out trading your mana starved lane opponents. Laning against Caitlin is also fun because her traps become free mana for you if you are willing to risk the long cooldown for mana.

R: On the Hunt

Passive: Sivir gains bonus attack speed for the duration of ricochet.
Active: Sivir grants her allies and herself 60% bonus movement speed that decays after a short time.

I find On the Hunt extremely valuable in lower elos. I often call it the idiot-proof engage tool. Knowing when you should engage is a tough thing to learn and I would say 4 out of 5 people on your team most likely struggle with it. I know everyone has had an experience where your Malphite just wouldn’t ult in and start the fight or your Wukong just could not get into position for his ultimate. Enter Sivir. If you’re that 1 person out of 5 that understands when to engage, Sivir is the champ for you. There is no other ability in the game that tells people when to engage like Sivir’s ultimate does. It’s loud, it’s proud, and it gives everyone around you crazy movement speed. Assuming you’re as smart as you think you are, if you press R and move forward to engage and your team leaves you to die, die knowing that your teammates are idiots and that they belong in this elo.

On the Hunt is not only useful for engaging. When you’re up against champions like Fiddlesticks, Kennen, Gangplank, or any champion with an AOE ability, On the Hunt is perfect. Lasting for four seconds at level 18, this is almost the full duration of a Fiddlesticks ultimate and lasts just as long as a Kennen ultimate. And not only does it keep you safe, it also grants safety to your allies. Using your own ultimate to blow a few cooldowns on the enemy team can easily lead to a reengage and a won teamfight.

Sivir has a ridiculously valuable kit.  Her abilities allow for a skilled player to exploit the common mistakes that many people make in lower elos. With good wave control and solid engages, a good Sivir player can drag a team kicking and screaming to victory. That’s all for today folks. I hope you’ve enjoyed my rundown of Sivir and my opinions on why she’s perfect for clawing your way out of Bronze. If you have any questions or feedback, leave in the comments below. If you enjoyed this guide on climbing the ladder, don’t forget to check back in a few days for my next champion guide.

Statistics and ability specs courtesy of the League of Legends wiki page.