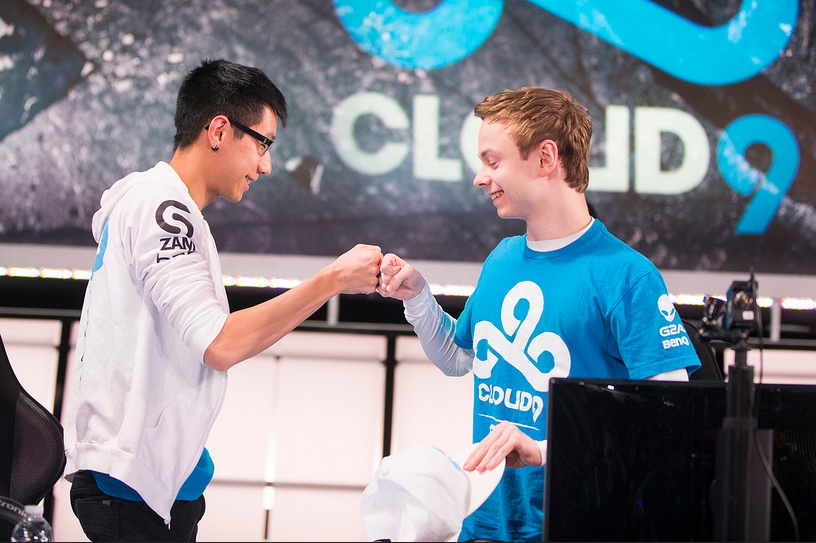 This last Sunday, NA LCS saw one of the most exciting matches of the whole Summer. While the standings suggested Cloud 9 versus CLG would be a one-sided game, there were some details that could change that perspective. First of all, the first seven C9 losses (including the previous match between these teams) were with Meteos on the team, Hai taking his place recently. With a new Jungler, the team had to adapt for a bit, but the last two games were both wins and in convincing fashion (game lengths of 24.39 and 28.32), trying to reach the safe 7th place and maybe qualify to Worlds. CLG came hot too, winning versus 2nd place Team Liquid the day before, and with a chance of tying them in the standings. A lot was on the line, and the teams definitely showed it on the Rift.

Into the P&B phase, Cloud 9 opted for a standard support ban in Alistar (one of aphromoo’s oldest mains) before targeting CLG’s staple picks Tristana and Fizz, which had brought them victories in their last three games. Since their 0-4 losing streak, CLG relied on ZionSpartan to be the carry of the team, giving him the early game resources so he could bully the enemy toplaner further and further behind while Doublelift worked as a turret-taking bot. On the red side, CLG had to ban Ryze, and added up Balls’ signature Rumble and LemonNation’s Braum, which had seen success versus NME as a way to protect Sneaky’s Kalista.

Cloud 9 went for almost the same comp that gave them a victory versus Dignitas last week. The team relied on Kalista as their main carry, providing him a lot of peel and shields between Maokai, Karma and Orianna, Hai’s Nidalee being the only different pick. CLG meanwhile drafted a teamfight, kiting-based comp. With Gragas, Janna and Azir, they had enough disengage to waste C9’s initiation tools and then rally forward with Sivir’s ultimate, leaving in the hands of ZionSpartan’s Kennen the task of locking down Kalista.

From level 1, CLG’s idea was to avoid the 2v2. Giving Doublelift’s Sivir safe farm while double-jungling was the best way to avoid C9’s matchup advantage and start bulding a lead through turret-based rotations. Still, Sneaky and LemonNation’s early wave control allowed them to recall and swap again into “Australia” lanes, preventing CLG from their standard strategy and giving Hai the chance to focus on both mid and the duo lane. His Nidalee would get behind in farm, but that wasn’t a big deal as long as their teamfighting aces in Kalista and Orianna could have leads of their own.

CLG would try to force action by TPing and getting First Blood on LemonNation, but Zion’s overcommitment and Incarnati0n’s outplay in a 1v2 situation would set the pace in favor of Cloud 9. Hai’s team would focus mostly on turrets and kills, so the 4k gold lead at 20 minutes was balanced by CLG’s 2 dragon stacks. Either by a Sivir or a Karma speed boost, picks went over for both teams during some 7 minutes, until the point where both teams decided to group up.

The clock was ticking close to the 28-minute mark when C9 made the first big mistake of the game, as they grouped up and wasted all their engage tools in a highly mobile target as Azir. CLG had the patience to kite C9 out and then fully commit to Incarnati0n’s Orianna even before he could use his ultimate, leading to a 4-0 teamfight and a Baron. CLG’s Baron use was efficient, keeping up with the Dragon counter and starting to break inner turrets, but their siege wasn’t good enough to crack the base gates. Both teams seemed to lack ideas when reaching late game, and they just grouped up in midlane for a speed dance of engage-disengage, battling for river control and Baron/Dragon vision.

Both teams teamfighting saw flaws, and as C9 lost a fight because of wasted cooldowns, CLG lost another one by throwing everything to the only tank in C9’s team. But instead of splitpushing, both teams left sidewaves balanced around the river and went straight to mid lane over and over again. When no neutral objectives were up, they just farmed, cleaned vision and warded.

I don’t know if Cloud 9 was overconfident or they just gave up on their patience. As soon as CLG traded On The Hunt for Incarnati0n’s Flash, C9 started to look for an engage on a… overzealous way. They split up versus the excellent zoning tools CLG had, and while Sneaky almost pulls off what could’ve been a historical 1v5 pentakill, it just couldn’t be. Hai and Balls jumped into Azir’s head while leaving the rest of the team without enough peel or lockdown, and Incarnati0n couldn’t but die when surrounded by CLG’s five members (props to Xmithie for the game-changing bodyslam there).

With an inhibitor down, C9 wouldn’t be able to defend from CLG if they wanted to push sidewaves and rotate between them, so they went for the high-risk play: Baron. They were fast enough to secure it, but got trapped inside the pit versus Azir, Kennen and Sivir. Everyone but Sneaky died, and while Zion suicided with his TP to the botlane, Doublelift and aphromoo played it well enough to close the game out.

Both teams came to this game with a lot to prove and with very clear objectives on their minds. Both adapted their styles into an atypical way of playing and different from what we usually see. It remains to see if Cloud 9 can keep this level the last week and stay in the LCS, while also having a chance to look for Worlds. It remains to see if CLG can finally live up to the expectations and have a strong playoff run. But in their search for such goals, both teams have left us with a game that can contend for the title of best game of the regular season. Let’s just hope we have more of these to come.

Thanks to LoLesports and eSportspedia for the pictures and stats.

Ariel “RuloMercury” is an article writer and a big eSports fan. He’s also a songwriter, and sings. A lot. You can follow him on Twitter if you like.