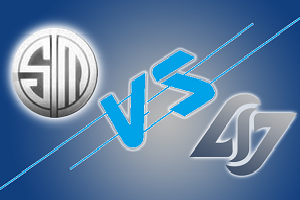 This is the first in a series of articles where I will attempt to analyse the Pick/Ban phases, and team comps of professional games in Season 5.

The first in this series, we have possibly the most hyped match of the season, CLG v. TSM. I hope you find this article useful, and I request any comments/criticism you have. I honestly want to improve, so don’t hold back! That being said, let’s begin.

Xerath: This is a standard comfort pick for Bjergsen that can end up being problematic. People may wonder why Ahri was not banned instead, and this could be due to several reasons. CLG might have prioritised banning wave clear champions to make sure their comp works out. CLG might have expected TSM to ban Ahri, being on red side.

(But inside sources tell me that the real reason for the Xerath ban is due to the bug that makes blue side teams blind pick him, like SKT T1 and Elements. hue)

LeBlanc: Another standard Bjergsen pick. LeBlanc probably wasn’t much more difficult to deal with than Ahri, but letting TSM have her might have sabotaged the team comp that CLG had planned. Additionally, it’s incredibly difficult to gank a LeBlanc during the laning phase, which is something most teams facing TSM should look to do, lest Bjergsen get very ahead.

Maokai: One of the best frontline tanks in the meta, and an overall solid top laner who performs well in a standard lane as well as a swapped 2v1, this was a risky champion to leave open. Dyrus later resorted to Sion, who basically fills the same role lategame, but doesn’t have as good an early game as Maokai.

TSM Bans: It makes sense that all of these were respect bans, considering that CLG was blue side and had first pick.

Rumble: Makes sense, considering that Zion has played incredibly on Rumble, and indicating that TSM would rather not let CLG first pick him. Respect ban 1/3.

Morgana: Bindings that nearly always find their mark, an ultimate that serves as an additional soft-engage, and later a major zoning tool(with Zhonya’s), and an ability that potentially negates any assassination attempt by Bjergsen. All this in the hands of the best Support player in the region. Respect ban 2/3.

Nidalee: This was the most surprising ban. Nidalee was a staple comfort pick for both Bjergsen and Link before her rework. If not anything else, I’m confident Bjergsen understood her new playstyle and how to counter her. Yet, they decided to ban her, possibly because of lack of practice against her. Respect ban 3/3.

1. CLG picks Lissandra: CLG’s best decision this PB phase. One of the most important flex picks in the current meta, Mid Lane Lissandra can hold her own against Bjergsen’s likely Ahri pick. Even though she doesn’t scale as well in damage and mobility, her ultimate is key in mid game fights to shut down one of TSM’s threats. Even if Bjergsen gets ahead on Ahri, or any other champion, Lissandra still has the ability to lock him down and negate any gold difference between the teams during early teamfights. The most important part about this pick is that Lissandra can also be played by ZionSpartan, making TSM’s drafting job more difficult.

2. TSM picks Jarvan IV, and Ahri: As expected, J4 gets locked in to take him away from CLG. This’ll force Xmithie on to his comfort pick, Vi. This also prevents CLG from getting too many power picks, like Lissandra, Gnar, J4, which would effectively shut down any of TSM’s threats even more effectively. Santorin, like most junglers is comfortable playing J4. Ahri is one of the best mid laners in patch 5.2, and Bjergsen is one of, if not the best Ahri player in the league. Ahri against Lissandra is not an unwinnable matchup, and due to Link playing safe, Bjergsen only does secure a small CS lead.

3. CLG picks Vi, and Janna: More lockdown to deal with Bjergsen’s Ahri. Collateral Damage can sometimes counter Spirit Rush if timed correctly. Vi is a reasonably contested pick in NA, and offers great single target lockdown. In theory, Vi and Lissandra should allow CLG to deal with both dps threats on TSM. These picks also give CLG sufficient resources to shut down Bjergsen’s Ahri at all points in the game. However, Vi was not a high priority pick at this point. If CLG had decided to lock in Sivir instead of Vi, and saved Vi for the next draft, TSM would be left with one less engage champion, and more importantly would be forced to pick a Marksman without a spell shield. I don’t understand why CLG had to reveal the Vi, and subsequently prompt TSM to lock in Sivir, if only to deal with all the lockdown CLG possessed. This is likely one of the factors that led to CLG marginally losing the PB phase.

Janna is currently considered to be the best support in most regions. However, CLG needs to secure this pick to take away the teamfight reset from TSM. Had they let TSM pick Janna, CLG’s would have found it difficult to convert their laning advantages into early teamfight wins. This is similar to the reason why they banned Morgana. Janna however, is not a playmaking support. Her AP scaling utility however is very effective, especially with the recently popular choice of building an early soulstealer. CLG’s draft has been solid so far, but given the lack of an independently effective support, additional pressure is added on Doublelift to maximize the resources Janna provides to a Marksman.

4. TSM locks in Sion, and Sivir: TSM sees the Janna pick and locks in more engage. Sivir provides a very potent ultimate, and a spellshield. The spellshield is even more valuable here, since it blocks both single target lockdowns that CLG has locked in.

Sion fills the role of the unkillable supertank, which CLG wished to take away with the Maokai ban. TSM had the choice of Gnar, Irelia and Sion. I assume Dyrus was not very comfortable playing Gnar, seeing as TSM has their only loss on that champion. The fact that Dyrus picked Sion over Irelia indicates that TSM wanted another engage heavy frontline. Picking Sion here, instead of a support for Lustboy helps TSM in two ways. First, it takes Sion away from ZionSpartan for whom it is a reliable comfort pick, and forcing him on Irelia, Lissandra, or Gnar, who he has not played before. Second, it leaves TSM’s support pick for last, giving them the ability to customize their team comp by adding a support with the right amount of engage/disengage/sustain that would be effective against CLG’s full team comp.

5. CLG locks in Corki, and Gnar: This is the point where CLG’s picks become highly questionable. CLG clearly wants to have a strong laning phase, and a strong midgame, during which they can brute force the enemy team into losing. This has been their strategy in nearly every game so far. Corki, currently is one of the best lane bully Marksmen, but not on that Doublelift has played before. Corki is also one of the least autoattacking Marksmen in the game (Given that his low-range and ability based dps is similar to Urgot, who Doublelift is known to play, one might be convinced that Corki would not greatly contradict his playstyle). Picking Corki over a champion like Caitlyn might also be due to the fact that Corki-Janna performs very well against a Sivir. However, I assume that playing a non-autoattack champion, and more so a champion on whom orb walking is so difficult, must have been very frustrating for Doublelift, which might offer an explanation for his questionable decisions later in the game.

CLG’s Gnar pick here is sensible, in light of all the disengage on TSM. Gnar has a great laning phase, be it standard or swapped. Gnar is also the best engage champion on CLG that completes CLG’s teamfight. Once Gnar stuns multiple targets with his ultimate, Lissandra and Vi are free to close the gap and focus down TSM’s priority targets, while Corki awkwardly pokes from the backline, with Janna providing bonus AD and standing by for disengage. This last pick also tells TSM about CLG’s teamfight plan, and allows them to one-up CLG, in terms of AOE engages.

6. TSM picks Annie: While CLG’s best pick was their first, TSM’s was their last. Annie quintessentially counters everything CLG is trying to do, and is also more dangerous than a Morgana or Janna because of how her AOE stun can be used defensively in the mid game and offensively in the late game. Both teams at this point know that TSM will outscale CLG, and Tibbers is only the icing on the cake that will win TSM the game if CLG fails to end it early.

It’s undoubted that CLG lost this match because of crucial misplays, allowing TSM to secure their highly significant first dragon buff, and later failing to coordinate CC and engage to what could possibly have won them the game. They most certainly could have made similar misplays that cost them the game, playing any other champion. But I believe that CLG made the entire game more difficult than it ought to have been with the early Vi pick, and the Corki pick, the latter more problematic than the former. There are multiple other champions Doublelift could have played with a early-mid game to fulfill a similar role in the comp (Graves, Caitlyn, Sivir). This would have affected their lane swap strategy, but that alone does not justify their decisions during the Pick Ban phase. That’s not to say however, that the game would have been a guaranteed win after a perfect pick ban phase.

So far, both CLG and TSM have only been facing teams that have communication problems, are in a slump, or are simply inferior mechanically. Their Pick/Ban phases so far have shown nothing very impressive. In spite of their questionable decisions, and an average Pick/Ban phase for CLG, the match was very close and surely lived up to all the hype. I believe it was the fans who truly won, though. It’s not every season that you get to see Hotshot or Reginald dye their hair pink.

If you’re here after reading my entire post, I’m extremely grateful to you for spending your time doing so. I would immensely appreciate any sort of feedback and/or questions, and look forward to constantly increasing the quality of the content I post here. Thank you.