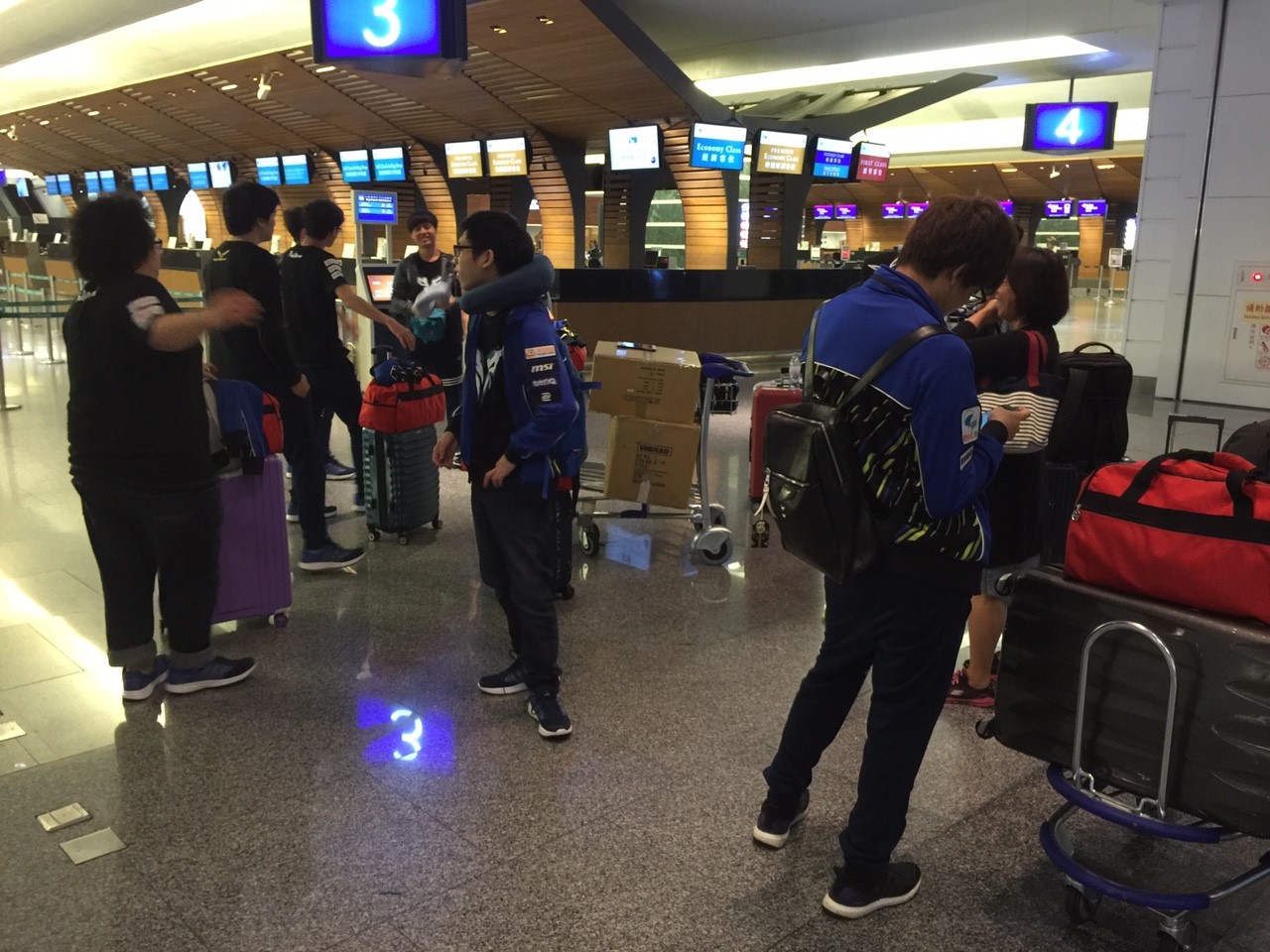 This time, I’ll be leaving for Paris as well to witness their performance at Worlds. I’ll also use my camera to record this journey.

After the first flight, we arrived in Hong Kong. Doesn’t it seem like the coach is filled with energy?

After getting on the flight from Hong Kong, the entire ride was bumpy. I fell in and out of sleep, ate a bit, and then went back to sleep. We flew around 13 hours, and we finally arrived at our destination in Paris.

Riot sent people to pick us up. After a number of hours on the plane, everyone was completely exhausted.

We arrived at the hotel and put down our bags. Afterwards, we rushed to the venue where group stages would take place to do the most important thing—eat! A bunch of different players arrived at the lunch room to eat.

After arriving in Paris and having my first meal, I already miss Taiwan.

When we finished eating dinner, everyone was really tired, so we didn’t allocate any more time to practice. We returned to the hotel to rest so that tomorrow we can make preparations!

The early morning is the golden time of the day. Breakfast is really important, so we definitely have to eat until we’re full. Doesn’t this European food look appetizing?

After breakfast, we got ready to go. Our first task is to shoot some stuff with the video team in scenic areas. Even though Paris’s streets don’t look clean, the buildings have that classic European style to them, so you can’t help but fall in love with the city.

Around 10am, we arrived at the Sacred Heart church. It’s said that nearby is a really popular tourist area.

After we spent some time there, we continued walking down. It was almost noon, so we ended up eating at McDonald’s. Compared to Taiwan, the McDonald’s in Paris isn’t that great—and there isn’t that much of a difference either.

After lunch, we started working! The second task of the day is to interview the EU LCS’s host—who also happens to be my good friend, Deficio. We invited him to talk about what he thinks about this year’s competition. You can see the video in the other entry.

After interviewing Deficio, we hurried over to the venue. Ahq and FW sat in front of their computers and practiced against other teams. Before the World Championships start, they have to adjust their mentalities and state of being.

After a number of scrims, everyone was hungry. Ahq’s Hulk walked for a long time to get his team their afternoon lunch. How could it be that it’s McDonald’s again? But for the players, this is the tastiest food.

During their rest time, GreenTea showed me a magic trick. It seemed real! I also found time to take a picture with Brazilian team Pain Gaming! Later, I had to find Ziv for an exclusive interview.

After scrims and interviews, we entered the cafeteria to eat again. Looking at the food tonight, what do you think?

After a delicious (?) meal, we observed how scrims went. This is basically what happened today. Flash Wolves practiced until 1am in the morning, and then they left the venue.

After a busy day, everyone was really tired! Time to rush back to the hotel to rest! Tomorrow is the last day to prepare. Be strong, ahq and Flash Wolves!