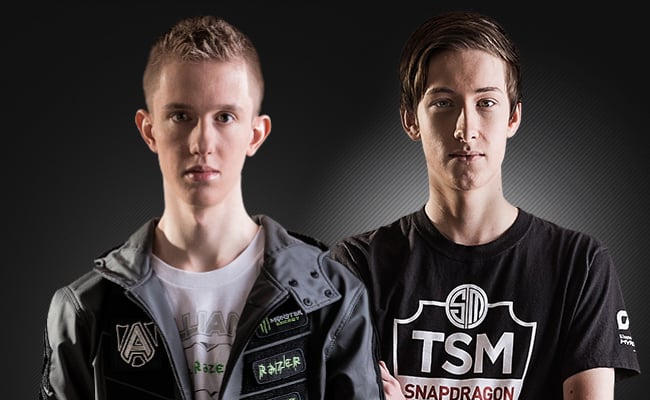 Clash of Titans: 5 international match ups that we may never see

With the introduction of the LCS and an increased emphasis on regional leagues, international competition has become more and more infrequent. The potential for the development of compelling storylines between international heavyweight teams has been severely hampered, and the chance to see the mightiest players across the world clash has all but disappeared. Below are some of the matchups that I would love to see, but that may never happen.

Throughout Season 4 there were only really 3 western talents that truly stood out above the rest, and two of them were Bjergsen and Froggen. We all know the story of Froggen, a young and cocky upstart on CLG.EU who has since matured into something more; a refined, classy and international caliber mid laner. Bjergsen is currently undergoing his maturation process, beginning his time in NA crushing every laner in his path, and since undertaking a shot calling role becoming more willing to be a passive, teamfight oriented player. Not only are these two stellar players are at different points in their respective careers, but they also have very different playstyles; Froggen is a more calculated, passive aggressive laner who prefers mages, with Bjergsen the openly aggressive and dominating presence in lane who is at his best on signature assassin Zed. Froggen likes to accrue his lead with small gains, slowly out csing and outpressuring his opponent until the mid-game team fights arise where he will be a force to be reckoned with. Bjergsen prefers to outright kill his lane 1v1, looking for outplays and moving into a pick oriented mid game, hiding in the fog of war and picking off solo opponents or split pushing to force 1v1 duels, which he will usually win.

The match up would offer us a chance to see who the premier mid laner in the west really is, and also offer us an insight as to the more effective mid lane playstyle; is it the explosive aggression of Bjergsen, or the cool calculation of Froggen. On his day, I feel Bjergsen has the higher ceiling of the two players, being stronger mechanically and having recently shown to be developing into a more rounded player. Froggen however has shown the ability to rise to the big occasion, hard carrying Alliance through the S4 Summer play offs, as well as being a much more consistent player than Bjergsen, at least through the latter half of S4. As such, over a Bo5 series I would have to give the edge to Froggen with his experience and consistency allowing him to better Bjergsen, but not by much and possibly this match up would be more weighted toward the young, developing Bjergsen in the future.

There is no doubt in my mind that the premier ADC of all time has to be either WeiXaio or the incredible talent of Uzi. No other player has been able to hard carry a team on an international scale such as Uzi has with Royal Club, and not only has he performed this incredible feat, he has done it twice. Uzi at both world championships had average team mates at best, no player being considered top 3 at their role at the tournaments, and yet he has managed to reach the final of both. Rekkles has a much more modest pedigree, with an LCS and Dreamhack Winter 2012 title to his name. Rekkles has however shown himself to be the strongest ADC in Europe and arguably the entire west, powerful in teamfights with a positionally strong style, and a solid laning phase. However he suffers from a passive playstyle, and many argue he has been significantly elevated by a strong team and support, two arguments one could never make against Uzi.

The main question in this match up would be whether Rekkles could cope with the hyper aggressive laning phase of Uzi, something he has never had to play against in Europe and rarely at international competitions. Uzi contests every cs and looks to smash his lane, and it would require Rekkles to step up or risk being choked out into irrelevance when team fights come around. I believe Rekkles has the skill in team fights to possibly rival Uzi’s effectiveness, if he can survive the laning phase, with Uzi’s reckless aggression often getting him caught out whereas Rekkles can be trusted to stay alive and stay dealing damage. I couldn’t honestly see the Rekkles of S4 surviving the intimidating ferocity of Uzi, but a Rekkles who has modified his mentality from last year could possibly step up on his day.

These days Gogoing has proven to be the true elite carry top in the world, with the fall off of Lord Flame and the international choking of Save leaving him with no true challengers. Zorozero was by far the strongest top lane talent in the west, with no other player even coming remotely close, able to play both the carry and utility style of top lane to great effect. Gogoing has proven his calibre at both world championships, often crushing the competition and carrying teamfights on his own back, even with a talented team around him. Zoro’s only international showing was a disappointing S3 world championship, Lemondog’s horrible underperformance not really allowing him to display his true ability.

Unfortunately it doesn’t appear that we will ever see Zorozero in the competitive scene ever again, as I believe that he is the only western top talent that could truly match the very elite around the world right now. The west has players like Dyrus, Balls and Wickd, who can go even and play solidly when required, but no one who could really outlane and outperform their opposition in teamfights. Gogoing undoubtedly has the ability, but Zorozero could have the potential to nullify it. Based on previous international showings and achievements, I would have to give the matchup to Gogoing comfortably, but based upon my own knowledge of the two players I believe this would be a fascinating and relatively even match up.

A tantalising match up that was dangled in front of us at worlds, only to be cruelly taken away, was the possible faceoff between Namei and Deft. Namei has proven himself to be one of the world’s elite ADCs, dominating a region renowned for its long line of premier marksmen produced over the years. Playing alongside greats like WeiXaio and raw young talents like Uzi, Namei was able to dominate the competition and take home 8 first place finishes over the year of 2014, despite playing in one of the most competitive regions. Deft himself plays in probably the most competitive region, holding an OGN and Masters title and consistently proving himself to be the best ADC in Korea, whilst unfortunately not having quite as many opportunities to win lan titles as Namei. This potential match up is now steeped with more dramatic connotations, the recent replacement of Namei by Deft bewildering many pundits and analysts.

These two players hold an uncannily similar style, preferring a passive farm oriented lane phase and opting for a positional based style in teamfights, relying on an innate sense of timing and zone awareness to output the most damage rather than raw mechanics. Both also possess a penchant for dodging skillshots, which contributes to their ability to position well in teamfights and remain alive. This match up then would appear to boil down to a simple question as to who can perform their shared style more effectively, and if that were the case it would be a difficult question to answer. However, Namei has always possessed a flaw that one could not accuse Deft of, and that is a lack of map awareness. Namei’s more inconsistent laning phase can often be attributed to being punished by the enemy jungler, often failing to predict a gank that could punish an aggressive move in lane. Deft is more able to consistently get through the laning phase well farmed and unscathed, giving him the edge in the otherwise close match up.

Meteos is the only true western jungle star. The force that was Diamonprox is a shadow of his former glory, and Saintvicious never came close to reaching his early Season 2 carrying heights in the modern era of LoL. Meteos has been the west’s jungle king by far for the past year and a half, showing a standard that could possibly match his eastern counterparts. Dandy is, by all accounts, the best jungler in the world, and maybe the greatest ever. Probably the key component (along with Mata) in the best team in the world at the end of last year, Dandy performed the low econ jungle style better than it has ever been done before, and topped a successful year in Korea with a world championship.

I will start out by saying that Dandy is inarguably the better jungler. His mechanics, his ganking prowess and his teamfighting are all better than Meteos.  But what Meteos has shown a particular knack for in the west is nullifying talented jungle opponents; he always seems to play the mind game just right. Meteos is always there to countergank at the key moments, always shadows his opposite number when necessary, but equally is able to force plays of his own when the opportunity arises. The true wonder here is whether or not Meteos could, for a whole series, get at least close to Dandy, close enough to keep the game in a position where Cloud 9 can attempt to perform some of their trademark rotational miracles. Ultimately, when playing someone as talented as Dandy, the criteria for doing well in the match up changes from the norm. If Meteos can perform well enough to prevent Dandy from snowballing the lanes as hard as Dandy normally does, then he has done all that can be asked of him.