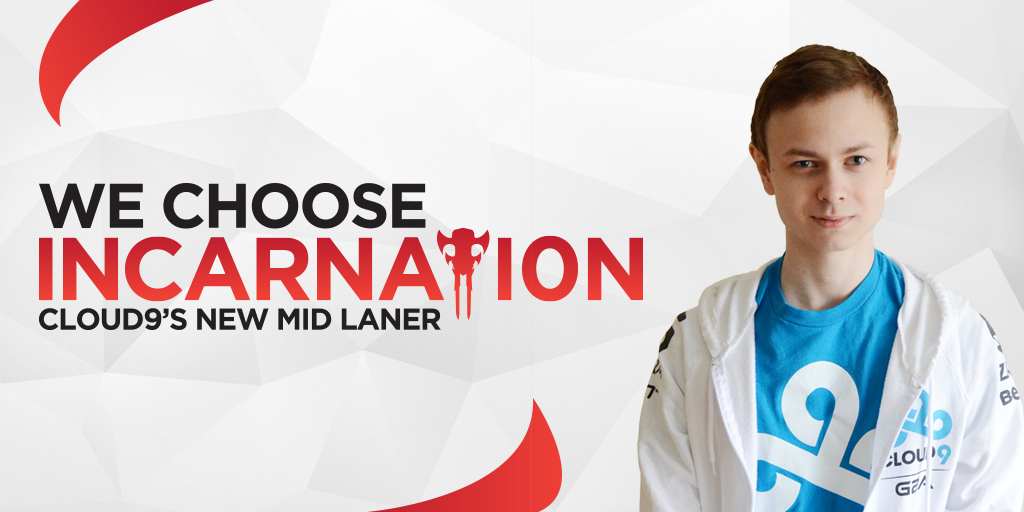 Immediately after the World Championships, there were rumors that Cloud9 had made an offer to Korean star, dade. As we now know, this former world beater turned the North American organization down in favor of more lucrative offers in China. One split later, after several months of rumors, the American organization has acquired, European solo queue virtuoso, Incarnati0n. After repeated losses against top-tier mid laners such as Fnatic’s xPeke or TSM’s Bjergsen in addition to the aforementioned dade, Cloud9 identified Hai’s weak mechanical play as one of the team’s main weaknesses. Replacing the team’s brilliant captain would come at a heavy price, but it was clear from the start that the organization hoped to replace his ingenuity with sheer firepower.

Unfortunately, Incarnati0n’s play thus far in the LCS has been hesitant at best. Cloud9, currently in 8th place with a 2-4 record, is beginning to look like one of the definite losers of the off-season. How could Incarnati0n, the ultimate product of a fierce European soloqueue system known for producing world class mid lane talent, flop so badly? It’s only been six games and there’s a long season ahead of us, but two problems immediately jump out. Although Incarnati0n was brought in based on his dominant solo queue performances, Cloud9 has neither given him his signature champions nor embraced a mid-centric style.

A quick glance at Incarnati0n’s champion picks over Cloud9’s six games shows two Kog’Maw picks, two Azir picks, and Viktor and Varus picked once each. Although these champions have high carry potential in the hands of experts, Incarnati0n has instead focused on playing a clean-up mid lane style much like CLG’s Pobelter or Dignitas’s Shipthur. Thus far this season, Incarnati0n has looked like a worse version of those two players.

His teamfight positioning is a particularly egregious issue. Even though his champion picks facilitate a clean-up mid laner style, Incarnati0n has repeatedly failed Cloud9 in teamfights. In most engagements, Incarnati0n plays too safely, unable to deal significant damage because he is out of range. In others, the European prodigy positions poorly and dies immediately. These picks also come with innate issues – due to the scaling nature of these champions, Incarnati0n has found himself playing in uncomfortable matchups in several of Cloud9’s games thus far. This tendency to pick into difficult lanes leads to both lane losses and an inability to make plays before the 20-minute mark, a shocking result for a player infamous for his early-game dominance.

As an outsider, it’s hard to know what Cloud9’s internal discussions have been, but one issue is immediately apparent. Whether by his own choice or through team-wide decisions, Incarnati0n has not been playing the champions he’s known for. During his time in Europe, Incarnati0n was best known for mobile assassins (Fizz, LeBlanc, Zed, Ahri) or heavy roamers (Annie, Lulu, Twisted Fate.) While several of these champions are currently out of meta, both Lulu and LeBlanc remain popular. In addition, the other champions, particularly Ahri and Twisted Fate, are powerful niche picks. In fact, Gravity’s Keane would play a key role in upsetting Cloud9 with repeated ganks on the latter champion.

One of the strangest aspects of Cloud9’s decision is that Incarnati0n’s predecessor was a notable assassin player himself, especially during his heyday in Season 3. Even after the assassin meta shifted, Cloud9 would prioritize Zed for their daring captain. Fortunately, Zed is also one of Incarnati0n’s best champions. Seeing as Incarnati0n’s play on poke mid laners isn’t providing results, it stands to reason that Cloud9 should consider moving Incarnati0n onto his signature champions. Moving Incarnati0n from a clean-up role to a playmaking one may grant the rookie import much needed comfort and confidence.

Giving Incarnati0n his signature champions may go a long way towards unleashing his potential, but his team should also consider simply giving him more support. So far this season, Cloud9 has made it clear that they are not comfortable playing a mid lane style. Instead, they have continued to place a large focus on their side lanes. While Sneaky has continued to show strong performances, Balls has not rewarded Cloud9’s efforts to keep him farmed.

What made Balls special during his prime was his mastery of teamfights. While his Rumble was particularly infamous,  he top laner’s ability to control space in teamfights and zone carries also applied to picks like Kennen or Renekton. Unfortunately, this top lane focus has seen increasingly diminishing returns, because Ball’s teamfighting skills have largely abandoned him. During Cloud9’s first game against TSM in last year’s Spring Split, repeated top lane ganks were able to put Balls over 50 CS ahead of Dyrus, but his poor teamfighting on Gnar left Cloud9 hopeless against Bjergsen’s Ahri. This season, Cloud9 has continued to focus on setting up Balls to become a teamfight carry, both through ganks from Meteos and rotations into empty creep waves. Over six games, Balls has played almost exclusively carry champions, playing Rumble, Ryze, Fizz, and Hecarim, with only a single win on the last champion. His last two games have been on the supportive Maokai, splitting 1-1.

This devotion to Balls has come at a very high opportunity cost for Cloud9. Meteos’s frequent forays into the top lane have left Incarnati0n open to constant ganks in the mid lane, an especially scary proposition considering his frequent use of immobile champions. Another big issue has been the team’s poor vision control. Hai was the most vision-centric mid laner in the LCS, so Meteos is not used to warding the mid lane. In conjunction with Incarnati0n’s own mediocre warding, the lack of vision and gank support has provided an additional barrier to Cloud9’s success.

A possible future for Cloud9

One very hopeful sign for Cloud9 came during their game against Team 8 on the second day of Week 3, their lone win since the season opener against TSM. Although Team 8 sits alongside Cloud9 at the bottom of the barrel, we saw both strong team support from Cloud9 and a much more confident Incarnati0n.

Rather than placing a focus on the top lane, we saw Meteos play with a mid lane focus, warding and counterganking for Incarnati0n’s Varus, even turning what would have been a certain kill for Slooshi into a second kill for Incarnati0n. This support helped turn Incarnati0n into a potent threat in mid-game teamfights, allowing him to complement Sneaky’s strong play on Jinx. To top it off, Balls picked Maokai and peeled for his carries rather than trying to carry teamfights on his own. Although some of Incarnati0n’s plays were too aggressive, resulting in one-for-one trades, his ability to make plays on the traditionally defensive Varus is a hopeful sign for what he might be able to do even without playing one of his signature carry threats – in Cloud9’s matchup against TiP, Incarnati0n’s hesitance on Azir remained a serious issue even after he received jungle priority.

Thus far, it’s seemed like Incarnati0n has moved from his ban into a prison of his own choosing. The player we’ve seen over the last three weeks looks nothing like the player whose daring plays tore through European solo queue. The transition from solo queue to pro play is always difficult but with a stylistic shift towards mid lane playmaking and continued jungle support, Cloud9 can place Incarnati0n into a position to show us what he’s made of.