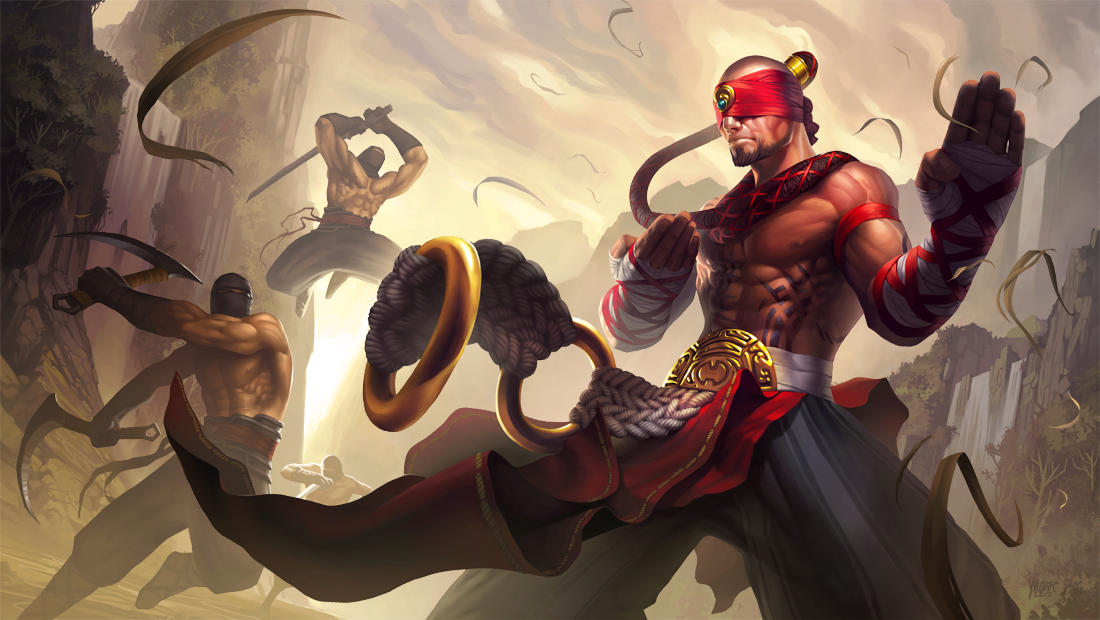 Riot has been on a campaign— a campaign to break the hold of the incumbent Bruiser junglers in the meta. Launching their changes, they’ve made a jungle which is deadly to all who tread within. Instating different smites, a new set of items, adjusted gold and experience, Riot foretold a world where all jungle classes would be equal in strength and diverse in their impact, hoping to end the era of Bruisers like Lee-Sin, Kha’Zix, Evelyn, and Elise, the big four of last season.

We now have Lee-Sin, Jarvan IV, Rengar, and the new addition of Rek’Sai being focused on in the LCK, while other picks such as Aatrox, Vi, Hecarim, and Pantheon have made appearances from time to time in Korea and within the first week of EU LCS.  Notice the pattern? They are all Bruisers.

Despite attempts by Riot in the form of both changes to the jungle and buffs to Tank junglers (Sejuani, Nautilus, and Zac come to mind in recent patches, along with Maokai’s buffs last season which sent him top lane), the Bruisers we know too well from Season 4 continue to persevere. Elise, Kha’Zix, and Evelyn have only disappeared because of direct nerfs.

Why have these changes, these “design levers,” failed to produce the “strategic diversity” in jungle champion pools? Most other changes have impact, such as the Baron and Dragon changes, but why does the jungler pool remain so tight on a specific class of champions? To explain this, we must first understand the environment we live in—the meta.

On Summoning Insight Episode 34, featuring Xpeke, Thorin had engaged Montecristo in a discussion of the meta as a tangent to their discussion Soaz’s unique champion pool.

“Explain it to me like I’m Bronze,” Thorin purred. “Why does a team need a tank, and why does it need to be in the top lane?”

Montecristo dove into the question, explaining why every role existed in order to provide the whole picture. On the discussion of tanks, Montecristo spoke of how teams needed someone on the team to absorb damage to protect the carries. Tanks could survive in the solo top lane because their durability made it so they were more likely to escape ganks in the longer lane. Montecristo also stated immediately that tanks could also be played in the jungle; but why don’t we see them?

In season three, we saw the reign of tank junglers like Zac, Volibear, Nasus, and other pocket picks while top lane boasted an array of dueling top carries such as Kennen, Vladimir, Elise (she was traditionally played top before moving to jungle), Jayce, Ryze, Rumble, Olaf, and others. However, the two positions swapped champion classes at the start of Season 4—tanks like Shyvana, Renekton, and Mundo were played in the top lane while Bruisers like Lee-Sin, Vi, Pantheon, Wukong, and Elise forayed into the jungle. What caused this shift in the structure of team compositions?

The answer is two-pronged. First, Bruiser junglers were buffed when Spirit of the Elder Lizard, the AD jungle item then, was changed to provide sustain in health and mana based on damage dealt: a huge boon for the class of junglers. The second prong is the reason why Bruiser junglers are with us for the foreseeable future: the lane swap.

As mentioned in this Riot publication, the 4.4 patch saw the ascension of the lane swap from an occasional trick to the dominant strategy. The article credits the rise of the lane swap to the changes of trinket’s cool down in the early game, making delayed invades so devastating that teams would bisect the jungle based on the mid-lane, as opposed to the river-bed. Teams would then transition into the 4v0 tower push, raking in the turret gold and global experience for extra boosts, until Riot adjusted tower rewards and buffed their defenses while also buffing Dragon’s gold reward to entice more focus on it.

The 4v0 meta faded away, but teams noted that lane swaps were still an effective strategic tool. Was your top lane counter-picked? Lane swap them to punish the enemy team’s pick. Is your bottom lane weaker than the enemy team’s? Lane swap to give your ADC solo farm and experience to bypass their weak laning phase and have your support roam to make plays with the jungler.

It is the development of this particular use of the lane swap which forced out dueling top champions. Recall how we described the presence of Tanks in the top lane at the start of season 4; this is because unlike their dueling oriented counterparts, Tanks can still fulfill their role despite being denied CS. If you deny a carry, like Riven, farm, they will lack the items they need to deal damage. A Tank, such as Mundo, on the other hand, will always be able to absorb damage—the enemy team just has to attack them instead of the carries, and they’ve fulfilled their role. While the effectiveness of Tanks are affected by their level and items, they will always be able to perform the function.

This concept also applies to the utility mages we see in top lane. Champions like Rumble, Lulu, and Lissandra, bring such utility to their teams in the form of either shields or CC, that they will always be useful. They, like their Tank counterparts, have kits which allow them to farm at a distance, either with ranged auto attacks or ranged spells, which help to mitigate the impact of a lane swap on their item build. Duelist top champions are typically melee with no ranged abilities to farm, meaning that in a lane swap situation, they cannot safely acquire CS like the Utility Mages and Tanks, and fall behind.

Furthermore, with the lane swap always available, top laners are forced into taking teleport in order to respond quickly to a swap to avoid missing farm and experience. Dueling top laners rely on combat summoner spells like ignite to help secure kills in lane, but since running such spells now in the top lane can be disastrous as a dueling top laner does not have any kill pressure in a lane swap, and without teleport they lose CS, running these champions are too risky with little to no reward.

In order to balance out the team composition where Tanks are sent top, Bruisers must be played in the jungle. Having two Tanks on your team in such major roles causes a team to lack damage. There’s no purpose to being able to lock down an enemy for six seconds, but being unable to kill them while doing so, especially when one can instead CC them for three seconds and kill them.

Now, in solo queue, it is still possible to run Tank junglers effectively, as opposing junglers may not pick the superior Bruisers, and it may round out the team compositions because dueling oriented top laners can be picked without fear of lane swaps being used. However, there is another aspect which hold the Tank junglers down in comparison to Bruisers, and that is the state of the jungle.

Mud in the Tanks’ Gears

In the early game, the Bruisers in the jungle are able to fill the niche as the playmakers: they make the ganks, providing enough additional CC and damage to secure kills or force summoner spells. After this phase is done, they transition to relying solely on their utility to set up play making opportunities, while building tank items to absorb as much damage as they can.

Tank junglers lack this flexibility and early game pressure because of the nature of their kits. In his article “Final Thoughts on Season 5 Jungle,” Stonewall008 discusses the issue Tank junglers face in the meta: “They cannot clear as fast, sustain those clears, travel through the map as effectively or respond as efficiently. The game has sort of evolved to the point where a lot of Tank junglers cannot excel versus competent opponents.”[i]

To paraphrase Stonewall’s other points, he points out that because the jungle became universally harder everyone’s relative power levels remained the same. Bruisers were able to clear the jungle fast enough to mitigate the early game sustain nerfs Riot pushed, while Tanks suffered greatly because they could not clear as fast. Lacking clear speed means Tanks get less gold and experience out of the jungle then Bruisers can. In addition, Tanks are weak to invades because they lack the necessary damage to duel other junglers.

Stonewall further asserts Tanks cannot be brought back into the meta without buffs across the board for them or nerfs to Bruisers. Decreasing the difficulty of the jungle would only be another global power shift, which does nothing to effect relative strength; Bruisers would still be the best. But buffing Tanks to the point where their damage rivaled Bruisers would only result with the jungle pool shifting, not widening as Riot wants.

We should also note, ironically, most of the jungle changes of benefitted Bruisers more than their rivals. For example, take the new Smite charges Riot has just implemented. Looking to allow junglers to use their smite in the late game without sacrificing Baron or Dragon control, they have also eliminated their originally implemented choice between using the ganking smites from Skirmishers Sabre and Stalkers Blade by giving them an additional Smite charge; one to farm and one to gank. Having that flexibility is more valuable than giving Ranger’s Trailblazer, the ideal pick up for to help Tanks in the early jungle, another charge to sustain in the jungle with. Riot has looked to ease the issue by allowing junglers to swap their upgraded smites, but this is another global change which Bruisers still benefit from.

In addition to all of this, there is the point that Tanks in the jungle will never rival their top lane counter parts. Solo lanes, as Riot has intended, will always have more gold and experience than the jungle. We’ve seen this numerous times as Riot as stamped their foot down on the rise of farm oriented junglers, by nerfing their jungle items twice (Feral Flare in season 4 and the Devourer enchantment this season), and adjusting the gold and experience level in the jungle to be substantially behind the solo lanes. Trying to run a compositional necessity of Tank in a position which is difficult for them and sub-optimal to the safer solo lane option is too much of a risk for professional teams to attempt.

With the state of the game in terms of balance, Tanks are weaker in the jungle than Bruisers. Lacking flexibility and speed, they will fall behind their rival classes in the jungle. With the jungle giving so little in rewards, Tanks will not get the items and levels they need in order to satisfactorily fulfill their roles in the team. Combine that with the inability to select a pure damage focused top laner because of the threat of a lane swap negating that pick, teams are forced to allocate the top lane to a utility and Tank focused role. In order to possess global early game pressure and compliment the team composition then, Bruisers, who deal good damage in the early game and can transition to a Utility-Tank role later on, must be played in the jungle. Unless these fundamental issues are fixed, Riot will not succeed in widening the jungle pool in terms of classes.