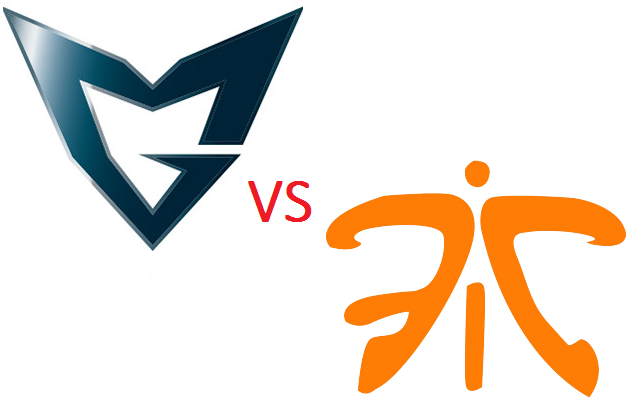 Just a few hours after the biggest upset of the tournament so far, most of the community is still trying to process the fact that Fnatic gave Dade, a player in the conversation for best in the world at his position, his best Champion and still won. The sheer improbability of a team letting Dade get Zed was so severe that the Casters didn’t even acknowledge the possibility until it actually happened, and then pre-tournament consensus was that teams would ban or pick Zed away from Dade every game. But, League of Legends is a team game, and from the start, something seemed very, very wrong with Samsung Galaxy Blue.

Early Level 1 in the Bot Lane sets the tone

One minute into the game, Samsung Galaxy Blue Support, Heart left the safety of his Bot Lane tri-bush to place a Ward in the immediate vicinity of the Dragon, only to get caught out by Yellowstar. While a missed death sentence saved Heart from even having to burn a summoner, the brief engagement left SSB clearly shaken, as they opted for a late lane swap in the face of Fnatic’s aggresive itemization. The lane swap allowed Fnatic to grab an early 4 minute Dragon, despite subpar aggro management leaving Yellowstar close to death. While SSB was able to trade back a Tower, Fnatic’s early machinations allowed Soaz to enter the top lane with a level advantage, and bully Acorn. In addition, Fnatic’s top tower falling early forced SSb’s bot lane back to the bot lane prematurely, and into the losing matchup they’d originall tried to avoid.

Chaos errupted around the Map at 7:45, as xPeke went in the for 1v1v Kill on Dade, while Acorn teleported bot lane in an attempt to punish Fnatic’s over-aggression. But a missed Glitter-Lance and a mirrored teleport allowed Yellowstar to escape, leaving SSB holding the bag in the face of Rekkles growing CS advantage. Meanwhile, two heroic caster minions allowed xPeke to get a kill back in trade for his own death, possibly changing the outcome of the entire game, and group.

SSB was able to take a brief gold lead off a kill in the bot lane. But a well-placed charm allowed xPeke to force Dade out of lane, and pick up the all-important mid tower, while Rakkles and Yellowstar also took down the bot lane tower, swinging the gold back in their direction

A short while later, Dade was able to pick up a solo kill on Soaz. But off to the side of the map, Acorn wasted his teleport in an attempt to provide support, tping in far behind either Soaz or Dade

Around the 16 minute mark, SSB and Fnatic began to dance around the dragon. Here, Acorn’s poor teleport earlier prevented him from defending Soaz in the top lane, allowing Fnatic to take top tower for free. SSB’s lack of a tower in the mid lane caused them to hesitate around the dragon, and by time they did force the objective, Soaz was able to teleport in and Fnatic brute-forced SSB out of the dragon pit, securing the objective and a 2.5k gold lead for themselves.

Both teams would spend the next five minutes farming up, except for SSB picking up a kill on a severely out of position Soaz. Then, with the Dragon up again, Fnatic baited SSB into the Dragon area, only to rush down mid and grab a quick tier 2 tower. While SSB was able to pick up the Dragon shortly afterwards since Rekkles and Soaz had to beat it top side to avoid a charging Blue, the growing loss of vision would start to prove deadly for an SSB team that relies heavily on their team fighting ability to win games.

After taking the Dragon, SSB rotated to the bot lane, taking the outer tower. But Soaz’s presence in the bot lane unintentionally baited three members of SSB into staying too long, allowing Fnatic to bum rush SSB’s tier 2 top turret. An ill-advised engage in an attempt to defend the tower, left Dade exhausted and then Dead, with Acorn falling shortly after in an attempt to save Dade’s life.

Despite all Fnatic’s moves, their gold lead at this point was still only 3k. Not nearly large enough in the face of a team known for erasing gold leads and closing out games. But shortly after taking the tower, and despite multiple missed skill shot initiations, Fnatic is able to take a 3-1 team fight when 3 members of SSB walked blindly into the Baron area and Fnatic’s trap.

Shortly afterwards, with both teams grouped up in the mid lane except for Dade who has yet to join his team from the jungle, Spirit wastes his ult engaging on Yellowstar and Cyanide, just missing catching Rekkles in the Cataclysm. SSB is forced to disengage as xPeke flanks around the side. SSB’s decision to turn around and fight proves fatal as a recently completed QSS saves Rekkles from Death Mark, putting SSB in full retreat. When the dust settles, Fnatic walks away with four kills and a Free Baron. By taking advantage of their superior vison control and rotations, Fnatic was able to turn a 3k gold lead into a 10k gold lead in 4 minutes.

After recalling home to spend all the gold they’d just earned, Fnatic pushed down the bot lane, quickly taking down the last remaining tier 2 turret for SSB, and then sieging SSB’s base. Blue was able to succesfully defend multiple waves before a Charm onto Deft, and Heart not even using Mikhail’s, allowed Fnatic to brute force the tower and pick up two more kills off of a Yellowstar Death Sentence. Despite holding a 5v2 number advantage, Fnatic chooses to put off ending the game and play it safe, backing out the way they came. But not before an ill-advised chase attempt by Dade ends in yet another kill for Rekkles.

At this point, with QSS completed on Rekkles, the game is all but over for SSB. The only thing holding back Fnatic from closing out the game is their own extreme over-caution. Despite picking up another kill on Dade, who again tried to pick off Rekkles in the middle of his team, only to fail again due to QSS, Fnatic opted to sneak the Baron with Cyanide and Rekkles while the rest of the team baited SSB into the mid lane. After returning to base for one final buy, Fnatic groups again in the bot lane, working their way around SSB’s base before a final fight around the mid inhibitor allows Fnatic to finally close out the game.

Despite failing to take down SSB in the last match of the day, LMQ is well positioned to make it out of the group stage thanks to the rest of the teams in the group beating up on each other. Assuming SSB wins out (and they looked much stronger in their second game of the day), LMQ just needs to win one more game to guarantee themselves at minimum, a tiebreaker game for that 2nd spot in the knockout stage.