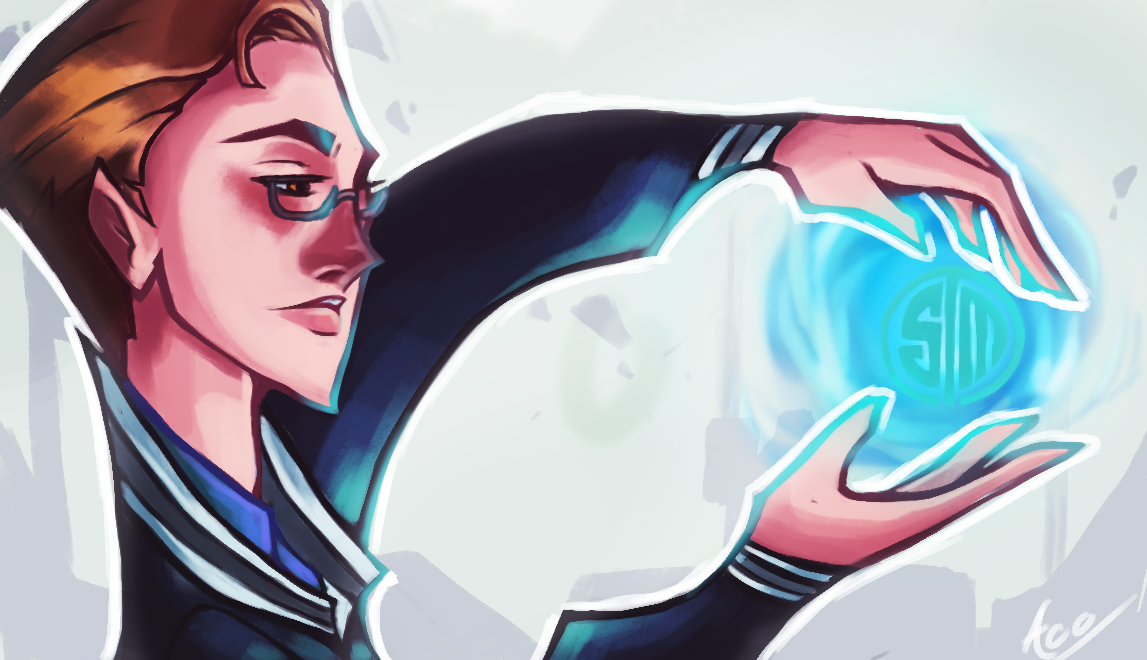 “Bjergsen was like a boy orphan trying to take care of his siblings”
-An inven user, reacting to TSM’s NA LCS 2014 Summer split play-off run

Søren “Bjergsen” Bjerg is the best League of Legends player in the North American region and the primary carry of the team with the largest and most rapacious fanbase. Team SoloMid are entering the NA LCS Summer split play-offs with the lowest seed in their history, down at fifth, and thus surrounded by the drawing gloom of a potential first round exit for the first time in six splits.

In past splits, Bjergsen had help in the form of one of the best coaching staffs in the League, as well as a mixture of solid veterans and fresh talent. Now, he faces the daunting task of having the entire franchise’s destiny for this year riding upon his youthful shoulders. With his team in disarray, Bjergsen is the solo carry of TSM’s fast arriving future, but to explain how he got to this point, I have to tell you a story about a boy.

A boy grew up in Denmark and it was soon obvious there was something different about him. He didn’t fit in and the world around him let him know as much. Those who cared for him could see he needed protecting, needed a strong support network to make him comfortable, needed a little time to find himself and his confidence. As fragile as the youth then seemed so he was precocious in his talent for a computer game. Too young to even compete in the upcoming professional league, he had to sit on the side-lines watching his team-mates qualify for and then struggle through their debut split.

Finally, the boy got his chance to run onto to the field and soon his whole continent could see his talent was something special, in a region famed for producing and refining talent at his very position. While he battled to establish himself as a player and find his place as a star, he had a team-mate who played the role of the watchful older brother, ensuring him a support network away from home. The boy still needed to be protected, needed a little time to find himself as a player and a star. His team would request he be spared media requirements early on, letting him ease his way into that cold water.

All of a sudden, the boy, still yet to break the barrier of 18 years on this planet, was the newest blockbuster signing for the biggest team in the English language speaking world. Where before he had been the rising talent of a new team who were in the process of improving and gradually moving up the ranks, now he was thrust into the spotlight of being the star of the team with the most fans in the Western world. Leaving behind his support networks, he flew across an ocean to face a challenge that threatened to break him.

Tasked to lead an ailing dynasty past a new champion who was displaying unprecedented domestic dominance, the boy would not merely be the newest signing, but the primary carry of the franchise. Replacing and playing under a brooding figure known literally for an abrasive approach to leadership which often bordered on bullying, there seemed danger in all directions for the boy. The boy’s talent was his shield, defending him against all outside forces which may otherwise have crushed him. As long as he was good enough, then scrutiny was exchanged for praise and the dangers which surrounded him were held back, and was he ever good!

Quickly the boy had established himself as a dominant individual player, far exceeding his domestic peers. Leading his team through a stellar first split, he marched all the way to the finals, only to be there neutralised and pushed aside, while the reigning champions cemented their own status as a North American dynasty. The next split heralded the temporarily delayed arrival of all the doubts and questions his initial display of sheer talent had seemingly exorcised. Working with a new coach and a changed line-up, his team was struggling through the split.

In the last few weeks, the boy’s team was able to rise up, but still had to enter the play-offs from the first round for only the second time in their history. With many band-aids temporarily holding together wounds which looked poised to burst open and gush, from champion pool limitations to new synergies far from developed, the boy found himself not just the star of the team but its primary chance of victory.

Suddenly he was not the young talent who had other stronger figures around him supporting him, suddenly he was the support network, the cornerstone holding the entire structure in place. If he fell apart then all was lost, but he was not going to fall apart. Where others showed weakness, he could shelter them with his abilities and make up for their mistakes. If the opponent was overwhelming his side as a unit, he could be the singular dominant force which could both match their collective effort and supersede it. The boy was becoming a man and inside the server he was now the big brother. The man helped his siblings become champions in a split in which they should not even have tasted the final.

Having grown into his destiny as the best player in the league, Bjergsen now reached the international level of play and had to take his team up against a variety of different teams from around the world. Where domestically hope always remained if Bjergsen could outplay his lane counterpart and exceed the star power of anyone else in the match, both conditions of victory were now weakened. Facing better competition at both his position and in opposition overall, wins came less often. Bjergsen could not always be the best player in the server and even when he was, that could be neutralised by the superior talent and team-play of the enemy.

For a brief moment, in March of this year, TSM seemed to have overcome that international limitation, succeeding as a team unit to win the IEM IX World Championship and on the back of team-play and good shot-calling. That window of opportunity had closed within less than two months. As they slid back into their old habits, some players slumped down to a level lower than they had been at even prior to their peak in March. More than ever, Bjergsen was called upon to carry them, to rescue them and to prop them up.

Bjergsen is the player who has the most expected of him in Western League of Legends. For TSM, he must be the leader, both in terms of tactics and at all times being the hope that they can win any game. Not only must he consider their route to victory, but he must often provide it directly by winning his lane and finding a way to manifest as the most dominant force in the server. If his team-mates struggle, he is the only one capable of turning any single game into a victory.

The fans demand success, it is not optional in the sense that it can be for many other in the same league. Many TSM fans still believe in the ailing strength of some of the other players in the line-up, and so will hear nothing said against such names. As a result, they will put up with what they perceive to be arrogance on the part of Bjergsen on the basis that the team keeps winning. If TSM loses, then Bjergsen is “arrogant”, “stubborn” and doesn’t “respect” his team-mates or coach.

Imagine having more asked of you, nay, demanded of you, than any one else, and yet being harshly criticised every time you complained of the difficulties surrounding succeeding, despite so often being the direct reason for such successes. Imagine being told you’re arrogant for thinking you are better than others, when you not only are but that almost objective fact is the primary reason your team is even relevant any more. “Be humble and stop thinking you’re special” they say, as they load up your pack with four times the weight of any one else’s.

Even back in Bjergsen’s home region of Europe, they have not fully accepted him as a legendary god of the Mid lane. He is used as a device to mock North America, as a European who had not yet been truly deified reigns supreme as the Michael Jordan of their league. Yet the backhanded nature of such compliments always implies that were he back in Europe then he would be just another good player among the likes of Febiven, xPeke, Nukeduck, Froggen and PowerofEvil. What he has accomplished so far is not enough, still they demand more.

TSM are a side in need of roster changes and possibly even a hierarchy overhaul, yet find themselves at the most critical point of the year, with a domestic championship to defend and qualification for the World Championship so close. Without the option of making any personnel changes, they must work with what they have and the only reliable strength they have is Bjergsen. The only sure advantage which can be gained in each match comes from the Mid lane and every opponent TSM faces knows as much.

The boy can no longer be sheltered, his support network cannot protect him from this scrutiny. Luckily, the boy is now a man and everything he has been through has hardened him for this moment. The man stands alone, sickly siblings again needing his help to make it across the finish line. For all he has endured and overcome, the most daunting challenge of Bjergsen’s career begins now. You may criticise him, but try to understand him too.