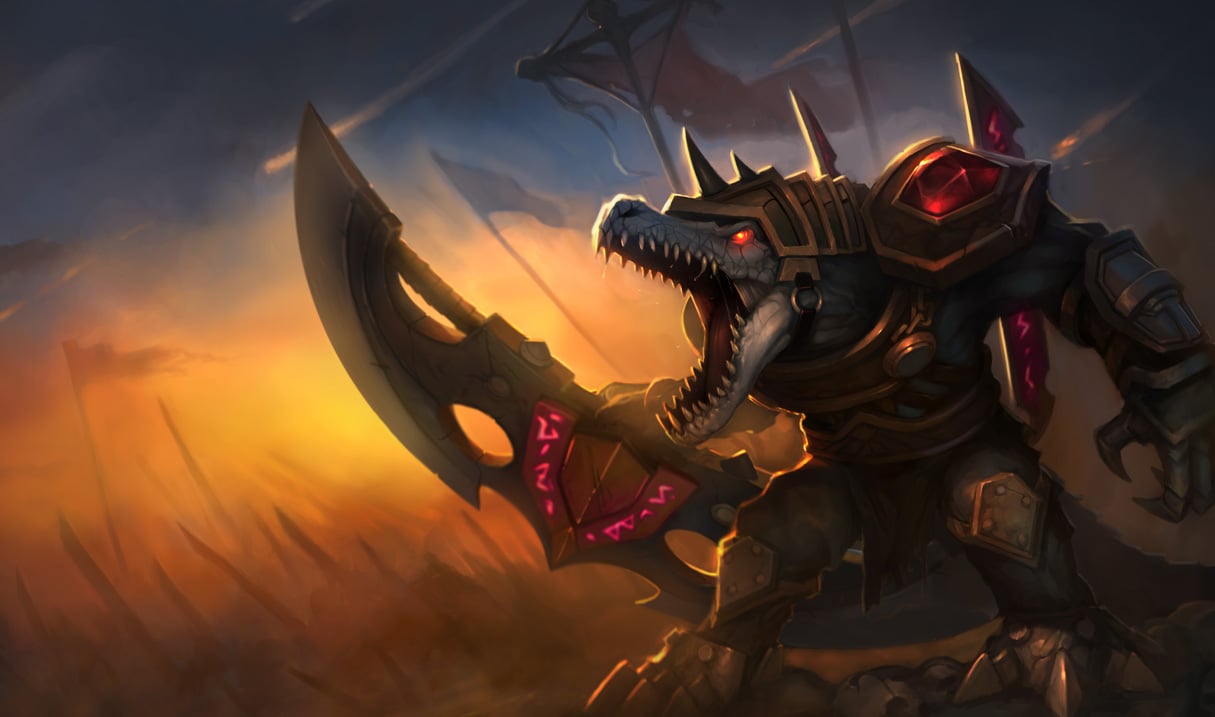 Renekton received a lot of interesting new changes with the recent 5.1 patch, but for many is unclear, what exactly changed for the fallen king of toplane.

In the following I am going to analyze this and provide you a clear insight about the things you should look out for when you play or play versus Renekton again.

Here are the official notes:

Overall we can summerize 5 changes:

Let’s take a closer look at the changes.

After having played the Butcher of the Sand since patch 5.1 for a while, I am now sure that the “FURY DECAY RATE“ increase is a nerf, which you can easily play around.

In fact, Renekton loses Fury as soon as he is „out of combat“, which means he didn’t hit or receive any damage for the last 12 seconds. That is actually a very long time frame, where it really shouldn’t be a problem for Renekton to hit a minion or a Champion to stay in combat mode.

Good Renekton players keep their Fury in store and don’t just waste it on minion waves. They abuse the scary red bar advantage to intimidate their lane opponents and ideally „zone“ them away from their minions, so that the opponents are forced to make a desicion: “shall I avoid the crocodile to stay healthy but lose minion farm or should I risk to CS?”

When I first read the PBE notes, I was afraid that this FURY DECAY RATE nerf could hurt one of his laning strenghts, but fortunately this is not the case as long as you are not the one, who gets zoned out.

If a ranged champion is able to completely bully “the Bully” from his minions away, then Renekton will have a really hard time to generate his 50 Fury.

Experienced Renekton players do only lasthit with Q and quickly back out again after it versus unfavourable matchups and therefore should be able to keep their Fury high, but I can definitely see, that the FURY DECAY RATE nerf becomes tricky versus some smart opponents, who are able to force Renekton into the „out of combat“ mode.

His Q, “Cull the Meek“, received the biggest change, two in particular. I am now going to analyze the first part of it – the new healing formula.

I can already tell you, this is an excellent change for all Renekton lovers.

As we all know, the crocodile has his problems to bite through the armor of his opponents. This might be the main reason why he is known for falling off at later stages in the game. Renekton doesn’t have any %-based damage like Maokai for example.

Armor purchase of the beefy enemy frontliners is going to shut down most of his damage, but then again, it is also very easy to kite Renekton or peel him off the squishier team members. However, it is not like he would become completely useless later on, his ultimate does sustained magic damage over time, which is a lot in total. Riot now wants to buff his lategame a bit and they do it by increasing his healing, so that it is harder to shut him down.

Here is the new formula for calculating the healing:

Wow. Wall of numbers. But don’t run away now, I will explain it very easily.

My first thought when I saw the new formula was:

“why did riot choose those weird looking numbers like 4.5 or the 0.04 bonus AD scaling?“

Riot did only exclude one very important variable when calculating the amount of healing, which depended on the enemy armor value, namely the Armor Damage Reduction.

Healing vs minions: 5% of damage dealt.

This is, how Renekton healed before vs minions with his Q. Don’t forget, that also minions have armor values:

Therefore, at every point in the game Renekton healed for

Riot did just remove Armor Damage Reduction, so that Renektons healing stays relevant at all stages in the game, no matter how much armor your opponents have. This is a huge buff.

However, now it gets a little bit complicated. I always try to keep my analyses correct and I adjust them when I made a mistake. Therefore I want to show you the other formulas, as Riot did not just exclude the Armor Damage Reduction variable, but did also change some numbers.

The old healing via Q – Cull the Meek was:

You can now simply deduce the old flat healing from the base formula, without considering the Armor Damage Reduction. I did it already above with the non-empowered Q versus minions.

Old formula for the heal scaling:

New formula for the heal scaling:

The heal calculations for the minions interaction stayed the same, except of a bonus AD scaling difference of “0,04”, which is nearly irrevelant. So this is a buff for sure, if we include the Armor Damage Reduction for the old formula.

The Champion interaction is now what we are really interested in.

For the non-empowered Q vs Champions:

For the empowered Q vs Champions:

“…and what does this exactly mean now???”I don’t know yet. I need to calculate the Armor Damage Reduction for the old formula and we will see.

Bonus AD means only the Attack Damage, which your Champion gains over Runes, Masteries and items. It does not include the Champions base AD or the AD, which he gets over leveling.

So, let’s take a Renekton with 15 AD Runes and the usual AD he gets over the Masteries. He starts the game with a Doran’s Blade, which gives him 7 AD.

This means a Renekton with 26 bonus AD at level 1.

The base armor from level 1 ranges from 17 (Orianna) till 31 (Rammus). I’m taking the average value for the calculation, which is 24 armor at level 1.

As you can see, the amount of healing is already very similiar when the target has 24 armor. Also, I didn’t even include possible bonus armor over Runes or Masteries in this calculation. It is most likely, that Renektons lane opponents invest in some armor runes or armor points through the Masteries.

The amount of healing will be the same when the target has 33,33 armor. With the inclusion of the bonus armor, Renekton is already at level 1 going to heal the same or even more versus many of his lane opponents.

Q – Cull the Meek: new Fury Generation when below 50 Fury. Renekton now generates 50% less Fury when hitting minions with his Q, but he does also generate 100% more Fury when he hits Champions with his Q.

The percentages are based on the old amount of Fury generated, which was 5 Fury. To cut this one short, it is an advantage or a disadvantage, depending on how you play.

But enough with this pseudo talk, it is a buff overall, as nobody wants to learn how to play a champion ineffective.

To make this a bit more clear:

even before patch 5.1, every somewhat decent Renekton player did always try to hit his lane opponent with his Q for the poke and the doubled heal. Using the Q on minion waves, does only push the lane furthermore, but you should try to freeze the lane as long as possible.

So, playing an aggressive crocodile was rewarding and is even more so now after the buffs. Those changes do really amplify his role as a lane bully.

We can summarize the last two buffs, as they are new ways of generating Fury.

Overall I can only see many decent buffs for Renekton.

It’s hard to believe that the predator won’t return into the LCS again. Veteran Ssumday is already spamming Renekton in the OGN and patch 5.1 is going to make him even scarier.

However, the times have changed, it’s no longer the early spring of 2014. New challengers rised to the top and Renekton now has to proof his lane dominance vs depressed trees, power-obsessed Ice Queens and annoying sounding, little squirrel-like yordles. And no, I’m not talking about Teemo.

Good luck with that, Renekton!