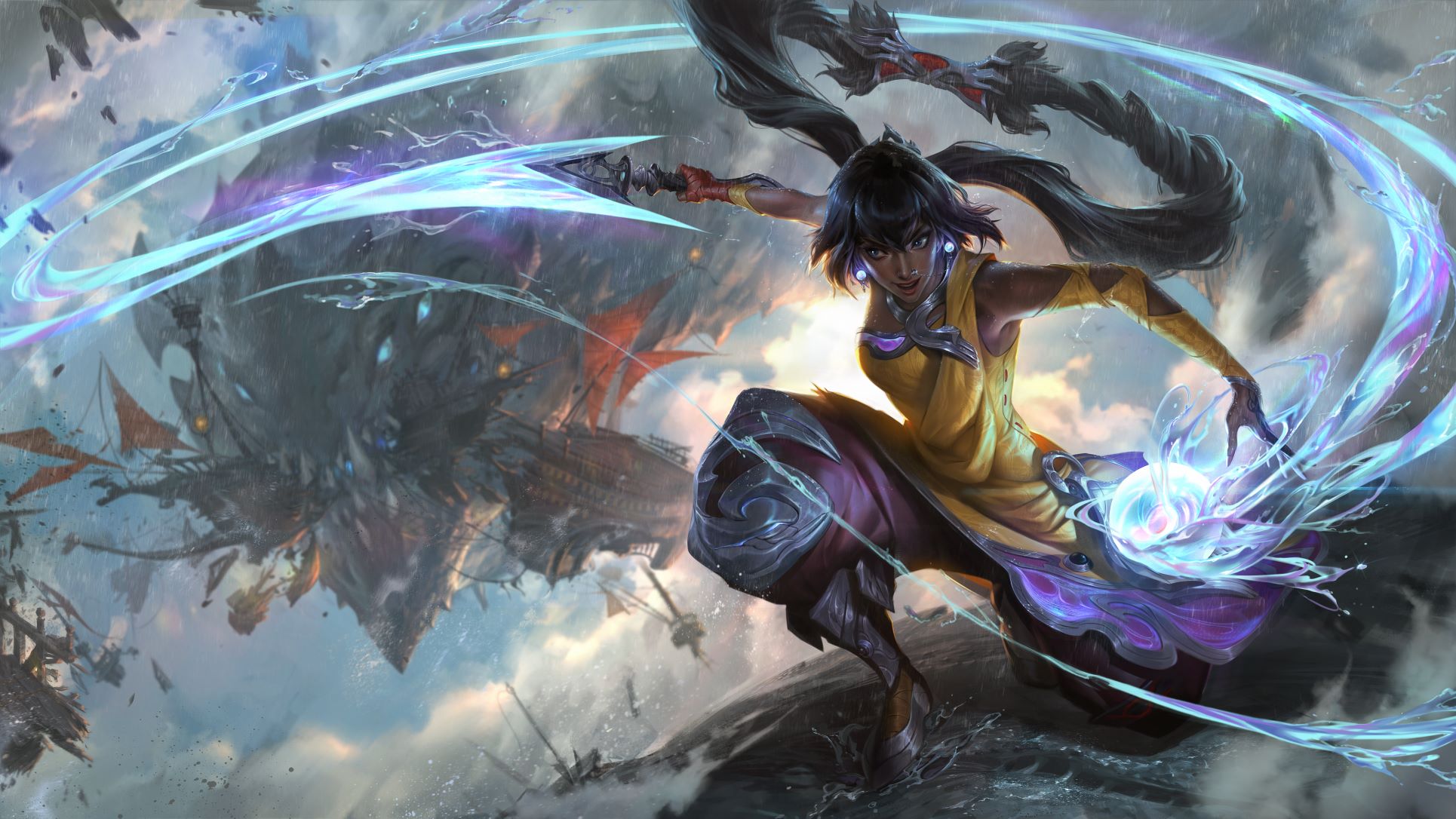 Nilah is the 161st champion to join League of Legends, and she has already made her debut on the Summoner’s Rift in style. Her kit has immediately made her one of the best AD carries in the game and without a doubt one of the most unique champions.

The Joy Unbound has a great passive that allows her to pick up more experience than other champions can. On paper, it’s possible to quickly get ahead of the enemy duo and take advantage. With low attack range and abilities that require you to get in close combat, however, doing so is easier said than done.

Usually, AD carries pick items that increase stats like their attack damage, attack speed, and critical strike chance. But the case is a bit different with Nilah. While she will still be picking up AD items, she may buy items that increase her defensive qualities from time to time, due to her distinct play style. The same goes for runes, which will vary from a standard marksman.

Related: The best Nilah counters in League of Legends

While playing Nilah, you will be looking to follow your team on engages, try to deal as much damage with your abilities and basic attacks, and live to tell the tale. Doing so requires carefully selected runes and items.

Here’s the best Nilah build in League of Legends.

Conqueror: The core of Nilah’s gameplay is hitting enemy champions with as many basic attacks and abilities as you can in a short amount of time. This allows Conqueror to be procced quickly, making it the best rune to pick for the champion. With the rune selected, you will gain adaptive damage, increasing your potential to one-shot opponents even more. At maximum stacks, if you manage to get there, you will also heal little, which may be crucial in surviving teamfights.

Triumph: This is one of the standard runes for AD carries and other AD-based champions in League. Triumph makes your takedowns restore 10 percent of your health, increasing your survivability both in the laning phase and in late-game battles. It also grants you 20 gold for each one.

Legend: Alacrity: Despite relying on abilities, you will have nothing but your basic attacks when they’re on cooldown. Therefore, having Legend: Alacrity to gift you some additional attack speed with every stack (collected via takedowns) will come in handy.

Last Stand: Due to Nilah’s gameplay, which requires her to get close to her foes, she will be low on health plenty of times throughout a game. Therefore, Last Stand is a much better option than Coup de Grace, which is often picked on marksmen. The former makes you deal more damage while your health is low, and given Nilah’s style of gameplay, it will make a big difference.

Second Wind: Having Resolve as your second rune tree on a squishy AD-based champion is a sight rarely seen, but it’s necessary on Nilah. Second Wind will allow you to heal back some damage you’ve taken from enemy champions, boosting your survivability in key fights on the Rift.

Overgrowth: In most cases, you won’t have many items that give you additional health or resistances, they’re needed on the Joy Unbound. Overgrowth, which permanently increases your health while minions die around you, is a key asset when playing Nilah.

Long Sword: For Nilah, there are two ways to start your game–depending on the enemy duo in the bot lane that you’re facing. In many instances, having Long Sword with three potions is a smart idea. With that, you have plenty of sustain and may stay longer in the lane against duos that poke and bully you. All in all, it should be picked in games where you know you’re in a losing position in the laning phase.

Doran’s Blade: This is a more common start for AD carries, and it’s still very much viable on Nilah. You should get Doran’s Blade in games where the lane is somewhat even. Usually, laning phases like these will be alongside aggressive supports like Blitzcrank and against duos that don’t have long ranges themselves and lack poking tools.

Stealth Ward: Having a ward or two in your pocket is always a fantastic idea in the laning phase. With them under your belt, you will provide yourself with a vision that will be pivotal to dodging potential ganks from the enemy jungler.

Berserker’s Greaves: Those boots are often the best for AD carries. In the end, you’ll get as much movement speed as any other boots45) and will increase your attack speed by 35 percent. This is important for Nilah since she’ll be trying to sneak in as many auto attacks as possible. In some games, however, in which you’re facing heavy AD or AP compositions, you may select Plated Steelcaps or Mercury’s Treads.

Immortal Shieldbow: There are a few possible options for the mythic item on Nilah, though, this one stands above the rest. With Immortal Shieldbow, besides increasing your most important stat, you will receive a shield if you drop below 30 percent health, which will boost your chances of surviving fights. Additionally, the item grants your other legendary items five bonus attack damage and 70 health. With this in your inventory, you should be pretty tanky for a marksman by the end of the game, and opponents should struggle with one-shotting you.

Essence Reaver: Essence Reaver is a core option for Nilah for a couple of reasons. First, it increases your attack damage, ability haste, and critical strike chance, making you deal more damage and, more importantly, lowering your cooldowns. And with lower cooldowns, you will be able to spam your Q faster which is where the second reason comes to play.

With Essence Reaver, players will have enhanced basic attacks after using an ability. For a champion that can pass through opponents and whip them with her weapon on a regular basis, it’s a superb pick.

Infinity Edge: This is a spectacular choice for Nilah. Now that you have your core items completed, and you start to deal some damage, it’s time to become a real monstrosity that your enemies will fear. Infinity Edge will help a lot with that goal. It gives you a mammoth amount of attack damage (70) and an additional 20 percent critical strike chance while granting you an extra 35 bonus critical strike chance if you have at least 60 percent of that stat, which you do with Infinity Edge, Essence Reaver, and Immortal Shieldbow.

Death’s Dance: This item is quintessential for two reasons. First, it boosts your major stats by an impressive amount. Secondly, with Death’s Dance, you’re allowed to stack some damage taken as damage over time, which improves your chances of survival in the late game. If you have some of that damage stacked, and you score an elimination, the item will also heal you by a large amount.

Bloodthirster: In many games, BT is the best way to round out your build on Nilah. It comes with 55 attack damage, 20 percent critical strike chance, and 18 percent life steal. But it also grants you a unique passive that allows your lifesteal to overheal you and be stored in a shield, enhancing your teamfight opportunities.

Kraken Slayer: This is one of two situational mythic items for Nilah. Kraken Slayer should be picked in games where you are facing tons of armor and don’t have a lot of heavy CC. With this item picked up, you’ll be able to shred through health bars and resistances more efficiently, and due to the low amount of CC tools in the opponents’ team, you won’t need as much protection from Immortal Shieldbow as you usually do.

Galeforce: Sometimes while playing AD carries, you just want to go all in. In such cases, Galeforce is a tremendous pick. It should be chosen against squishy team comps that have numerous ranged champions, who are difficult to get to.

Phantom Dancer: This is a useful replacement for the Essence Reaver if you’ve picked Kraken Slayer or Galeforce since it increases your potential in teamfights by making you more mobile and giving you more attack speed.

The Collector: This is another fantastic item when matched against a squishy composition. It allows you to finish off low-health enemies much faster due to its unique passive. It also improves your attack damage and critical strike chance (55 and 20 percent, respectively).

Force of Nature: Sometimes you may be struggling in teamfights and will need some more resistances against AP-based champions, who are common in the meta. In cases like these, obtain Force of Nature, which significantly boosts your health and MR. It also has a phenomenal passive that increases your movement speed even more if you’re targeted by mages while reducing all incoming magic damage by 25 percent.