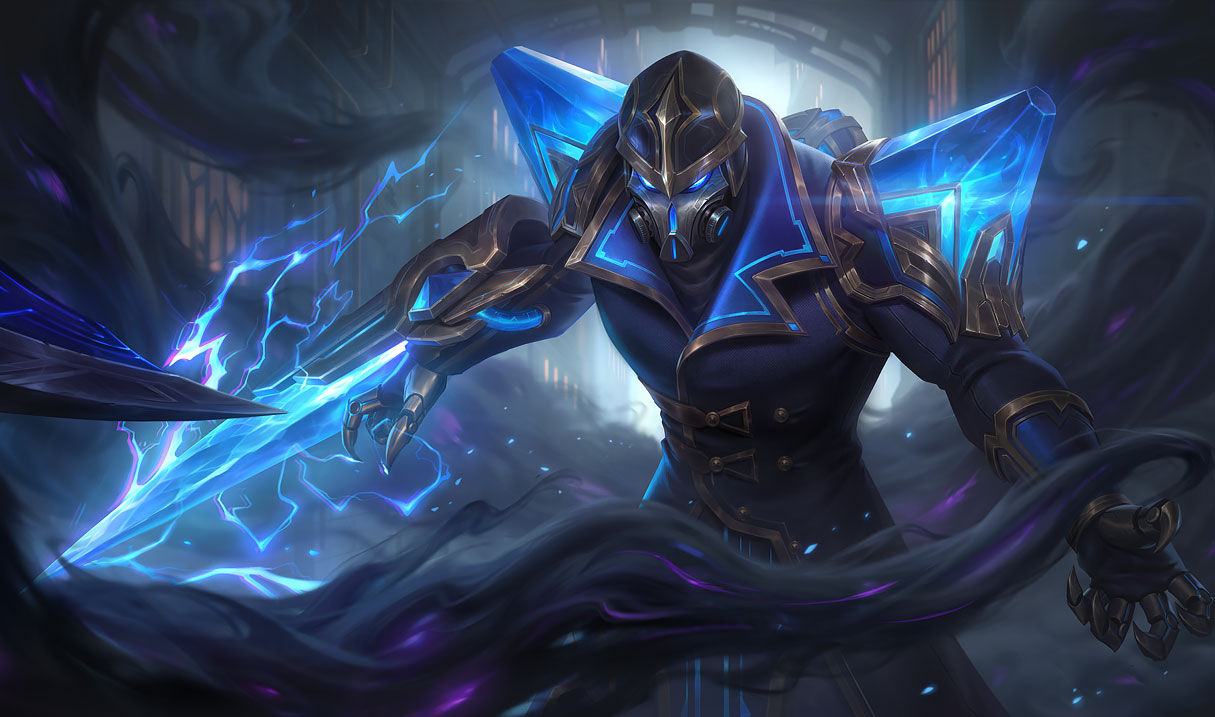 Kassadin is one of the best scaling mid laners in League of Legends’ season 11. He can take over games quite easily if left alone to farm and get his core items. While he does have a weak early game, which can be exploited by enemies, the combination of runes and items below should help you get past that point.

As with all League champions, specific items are going to be more effective depending on the circumstance. But there are certain items that are most effective on Kassadin in all types of games. These core items are going to give you the best chances of performing on this champion.

Fleet Footwork: As a melee mage, you’re going to be punished a lot in the early game, especially since most popular champions in the mid lane are ranged. As a result, you need to double down and take all sustain possible through items and runes. This keystone will ensure that you get some health back in the laning phase and get more time to stay in lane until you reach your core items. In teamfights, the added movement speed buff can be the difference between life and death as well, which is very valuable.

Presence of Mind: This rune is going to resolve all your mana issues, especially considering how mana hungry Kassadin is. Due to the increased mana cost on your ultimate, you’ll go through your base mana pool in a couple of seconds. This rune ensures that you get some mana back on takedowns and gives you the possibility to take over teamfights with ease.

Legend: Alacrity: This is a pretty basic rune to make your auto attacks feel more fluid. It gives you the needed attack speed to execute your combo swiftly and delete opponents in the blink of an eye. If you’re facing a crowd-control heavy composition, feel free to take Legend: Tenacity instead.

Coup de Grace: This rune acts as a finisher. It allows you to deliver even more damage to low-health targets, ensuring you execute them with your combo and get your mana back with Presence of Mind.

Taste of Blood: Taste of Blood is a simple sustain rune. It gives you some health back during short trades during the laning phase. You want all the sustain you can get to survive the early game.

Ravenous Hunter: As one of the most powerful healing runes in the game, Ravenous Hunter allows you to heal back up based on damage dealt from spells. While in the early game the impact might not be that high compared to other runes, once the match gets to the later points of the game, you’ll heal back up from 10 percent to 100 percent in a matter of seconds, which is crucial if you want to win teamfights and be as slippery as possible.

Having some early AP and the ability to snowball is great for Kassadin. If you get some early assists or kills, you’ll get a nice amount of AP while you’re working towards your core items. On top of that, you can buy a Refillable Potion with Dark Seal early on to improve your sustain.

During the farming phase, you are most likely going to take damage from enemy champions. The Refillable Potion heals back 125 health over 15 seconds and has two charges, giving you a nice amount of sustain before you have to do your first base. On top of that, it automatically gets refilled when you base, so you don’t need to invest gold into new potions.

Sorcerer’s Shoes are a great boot option to rush for the magic penetration stat. It’ll increase your damage by a lot early on with opponents not having a lot of magic resist items unless they’re a tank. If you pick up a Mythic item such as Luden’s Echo on top of them, you’ll be ignoring most magic resist your enemy has and do almost true damage to them.

With Rod of Ages no longer in the game, Kassadin players pivoted to Everfrost as the first core item. It gives a nice amount of stats similar to Rod of Ages in health, mana, and ability power. On top of that, this Mythic item gives you 20 ability haste, 15 ability power for every Legendary item, and has a nice active effect to do damage and possibly root enemies you hit with it.

Archangel’s Staff was nerfed significantly during the offseason with it no longer granting a shield or refunding mana on a kill. The item is much worse compared to the previous iteration but without it, you won’t be able to spam your ultimate in teamfights. As a result, you want to pick up a Tear of the Goddess early on during your first backs and then convert it to an Archangel’s Staff once you get your Mythic item and upgraded boots.

There’s no better item for mages than Rabadon’s Deathcap. It amplifies all your power and while some players might rush it if they’re winning the lane, it’s quite a suboptimal path. It’s best to rush it if you already have other core AP items. If you have an Ornn on your team who can upgrade it, then make this item a priority. You will get a lot of ability power from Rabadon’s Deathcrown (upgraded Ornn version).

Zhonya’s is a great item, especially against heavy attack damage-focused teams or against champions who rely on combos to kill you. One thing which helps this item be great is Seeker’s Armguard, which is one of the most gold-efficient items. If you rush it early on, you can sit on it for 20 minutes without issues since the stats it gives are very effective for the gold cost.

In teamfights, Zhonya’s Hourglass allows you to deceive opponents. You can force them to use all of their spells and engage tools on you, then use Zhonya’s to give your team some crucial seconds to wreak havoc on the enemy team while you’re untargetable.

If enemies are stacking up magic resist then you definitely need to invest in a Void Staff. Sometimes it’s worth it to purchase a Void Staff instead of a Rabadon’s Deathcap if the enemy is heavily magic-resist stacked. Prioritize this item after your core items if the enemy has a lot of tanks. In the current meta you might not encounter these situations quite often as people shift away from tanks to bruisers or assassins, but if you do, acquire this item as soon as possible.

If you’re facing a heavy ability power-focused composition or a composition that has too much crowd control, then Mercury’s Treads rush is a must. It gives you much-needed early magic resistance and denies a lot of duration from any crowd control landed on you. While it doesn’t have the ability haste or the magic penetration you need to be efficient, the fact that it can completely negate some champion’s efforts to kill you is more than worth it.

These boots are one of the most efficient and cheapest in the game. They give you additional ability haste, which scales well with your kit, alongside reducing the cooldown of your summoner spells. If you’re running Teleport, it means that you’ll be able to split-push more often and join your team for teamfights. They are a decent alternative pick up if the enemy has a lot of magic resist, and the additional magic penetration from Sorcerer’s Shoes won’t help you ignore most of it.

Frozen Heart is a tank item that benefits Kassadin quite well due to the stats it gives you. You get 80 armor, 400 mana, 20 ability haste, and a nice passive to reduce incoming damage from attacks regardless of source. The item costs only 2,500 gold and can be rushed sometimes instead of Everfrost if you’re having a rough time.

Riftmaker is an alternative Mythic item to Everfrost and is mostly picked up by players in combination with a first item Frozen Heart. This build makes you tanky and hard to kill, but you’ll be doing less damage if you were to go for a traditional build of Everfrost and Archangel’s Staff.

If you are snowballing the lane and want to take over the game quickly before the enemy scales, you can upgrade Dark Seal to Mejai’s Soulstealer for only 1,250 gold, the price of a Needlessly Large Rod. However, once you get it, you need to be very careful since you’re putting a huge mark on yourself. Opponents will want to shut you down to reduce the stacks granted by Mejai to reduce your damage output.

If you need extra burst damage, then Lich Bane is your friend. You can use it to take down towers quickly as well, so if you’re left unchecked to split-push, you can easily be xPeke and finish the game while other members are busy fighting each other. In teamfights, this item allows you to get on top of a target and delete them before they get time to flash, especially if they’re a squishy mage or AD carry champion.

Oblivion Orb is a cheap item costing only 800 gold, allowing you to reduce the incoming healing from your opponents by 40 percent. If you pay an additional 1,700, you can upgrade it to a more potent version, reducing incoming healing by up to 60 percent while also getting more ability power and some health.

What was once a rush item became an optional item against CC. Use it against heavy-pick compositions which rely on getting an engage to dismantle you. By having a spell shield to protect you from that Nocturne Paranoia or Ashe Arrow, you can increase your chances of winning such games. But be wary not to waste the spell shield before a teamfight begins since it needs quite a lot of time to recharge. If you waste it, ask your team to wait a couple of seconds before engaging to ensure success or victory.