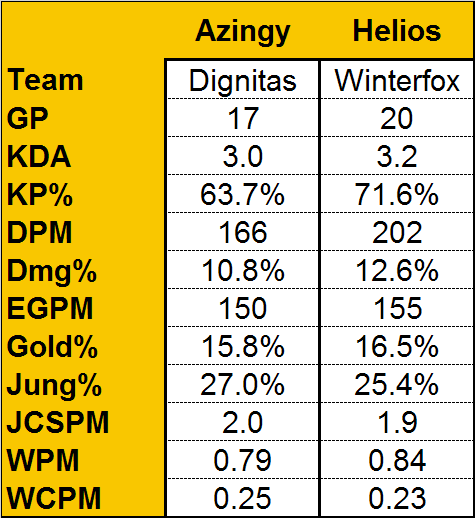 Team Dignitas announced today that they have acquired Korean jungler Dong-Jin “Helios” Shin from Winterfox, replacing Andrew “Azingy” Zamarippa, who had been playing with the team since Week 6 of the 2015 Spring Split. Zamarippa will apparently remain with the team as a substitute.

Has Dignitas improved their lineup with this acquisition? Not significantly, based on the two players’ 2015 statistics.

Let’s compare the two players’ performances so far in the 2015 season. The stats below reflect all 2015 LCS games to date, from the Spring Split, the Promotion/Relegation tournament, and the first two weeks of the Summer Split.

This year, Helios outperformed Azingy overall, but not by a large margin. Helios barely edged Azingy in KDA, but had higher average kill participation and dealt more damage, showing that he can be a greater force in combat throughout the game.

Helios also earned a bit more gold than Azingy, and took home a larger share of his team’s earnings, on average.

Azingy took a higher share of all jungle farm (Jung%) than Helios, farming slightly more jungle creeps per minute (JCSPM), but Helios’s lower jungle share may be due to sacrificing more farm to his carries.

Azingy’s best and most played champion was unquestionably Zac. He has put in 8 games on the champion this year with a 50% win rate, earning a 4.4 KDA, 66.4% average kill participation, and three First Blood participations.

Helios shows some strengths that Azingy does not, tending to output a little more damage and earn a little more gold. Helios’s champion pool will hold some differences from Azingy’s, as well (bye bye, Zac!).

Instead, Dignitas will probably be hoping they benefit from Helios’s experience and leadership to help their entire roster improve. Along with KiWiKiD and Shiphtur, Dignitas now has a roster full of competitive veterans. Combined with an underrated Top laner in Gamsu and an ADC in CoreJJ who has shown occasional moments of excellence, DIG will be a team to watch over the next few weeks to how well they adjust to this change, and whether they can follow up on a strong 3-1 start to the split.

If you enjoyed this look at player statistics, head to OraclesElixir.com, where up-to-date player and team stats are available for the NA LCS, EU LCS, LCK, and LMS.