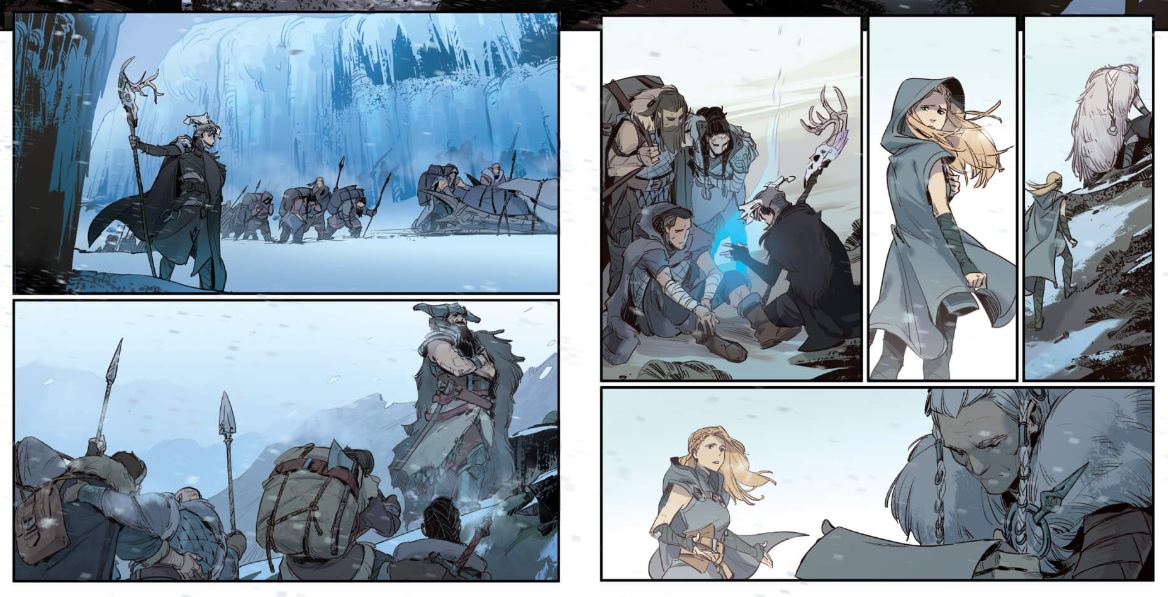 If you’re a League of Legends fan or comic book aficionado and have been following recent news about the Marvel x Riot Games partnership, you probably already know that Ashe, a playable champion in League, is about to star in her very own comic series.

The series, called Ashe: Warmother, will be an origin story, and everyone knows that Marvel loves a good origin story. Riot spilled the beans on some of the story’s details this week. Apparently, it will hover around Ashe’s relationship with her mother, and how she balances her expectations with becoming the leader of her people.

Being the good ol’ fashioned, tinfoil-hat-wearing theory-crafters that we are, though, that’s not enough for us. We don’t think Warmother will completely rewrite Ashe’s already pretty cool lore, but that it will instead build upon it. So we dove into what Riot has already written to figure out what exactly might transpire in the new series.

For example, why are her mother’s expectations so high for her? Well, that’d be an easy question to answer if you knew who Ashe was. Or, at least, who her people think she is. To really understand that, we have to dive way, way back, to the dark days of the Freljord, the frozen northern lands of Runeterra that people like Braum, Olaf, Tryndamere, and Lissandra call home. Apparently, if you’re from the Freljord, you either have fantastic facial hair or are literally composed of ice, with no middle ground.

Ashe’s importance in Runeterra, and likely her importance in the eyes of her mother, comes down to an individual known as Avarosa. She wasn’t a god by any means, but Avarosa was a queen—who, for the first time in maybe ever, united the warring and raiding tribes of the Freljord, we think, to combat the Void. To dive into why the Void was there to begin with would be to dive into weird cults and a pretty messed up sorceress named Lissandra, who may or may not be her sister, but that’s an entirely different story.

Think of Avarosa as more like Theseus from Greek Mythology. Super badass and heroic? Yes. God? No. Queen Avarosa was, from our understanding, the ruler of the best version of the Freljord in the region’s history. By uniting the tribes, the region was allowed to flourish until eventually she was sealed away in Dark Ice, magically enchanted ice which seems to be infused with the powers of the Void itself. Again, though, that’s a different story.

In Ashe’s biography, we don’t meet her until a little bit later in her life, when she’s already grown a fair amount after a childhood spent idolizing Avarosa and following in her footsteps. To be fair, though, there aren’t many better people in the League universe to idolize. By following in Avarosa’s shadow, she dreamed of a united Freljord in her future, an idea that, by that time, most people thought was foolish or even a myth. When her mother, the leader of her tribe, was killed, Ashe decided to point her tribe towards unifying the region rather than seeking revenge on her mother’s killers.

This, as you can imagine, annoyed some people. So much so, in fact, that the tribe rallied together a band of assassins to send after her, which caused her to flee into the Freljordian wilderness. After following a definitely-not-magic hawk around for a bit, she stumbled across an old tomb from which she drew an ancient, icy bow before turning around and slaying her pursuers with it in a single attack. This bow was Avarosa’s, and when Ashe returned to her people, all covered in ice magic and wielding a shiny new bow, they believed she was either the reincarnated Avarosa herself, or at least someone who was heavily blessed by her. Either way, there wasn’t much back-talk after that.

So not only is Ashe the leader of the newly-named Avarosans, she also may be the reincarnation of one of the most famous Freljordian heroes ever. In other words, she has all the makings of a super hero. So, with her lore and importance being firmly and obviously spelled out, what do we think will be featured in the comic?

Well, for starters, we assume childlike Ashe will have her head full of heroic dreams and a united nation, and that may cause her to butt heads with her more traditional mother. We also assume that the comic will tell the story of her mother’s death, which was only briefly glossed over in Ashe’s current lore. It’s possible that we’ll meet Avarosa, or some version of her, but from the way Riot’s head of creative development, Greg Street, described it in his video this week, it sounds more like the comic will take place before Avarosa gets her strong, frozen hands around Ashe’s conscience.

Instead, it’ll probably focus on the relationship with her mother and set the scene for why the people of the Freljord don’t want to be united, or at least, why Ashe’s fantasy has so much staunch opposition in the present day. In those people’s eyes, it’s just that—a fantasy. And in the frozen harsh lands of the Freljord, that’s the sort of thing that will get you killed.

Ashe: Warmother goes on sale Dec. 19 digitally, with a print copy to come out later in 2019.