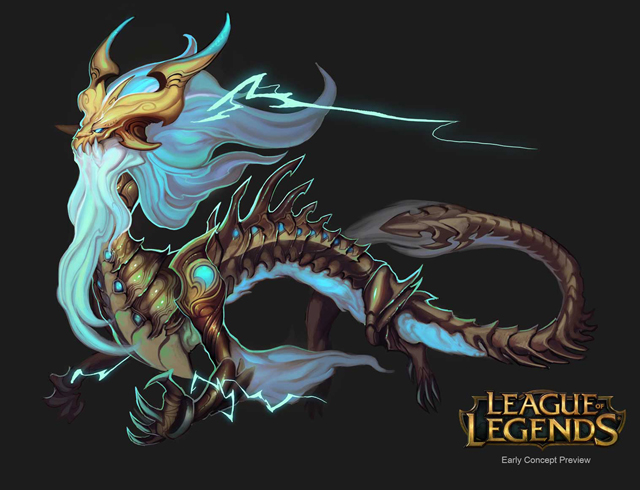 In League of Legends some champions take inspiration in their design from popular culture, sharing small aspects and characteristics. Wukong, however, is different. He is a fictional character, one of the main heroes in “Journey to the West” a book very famous in China. His character, “Sun Wukong” has powers similar to that of superman, and was the inspiration for Goku, in dragonball (Goku even being a japanese translation of Wukong).

One famous story near the start of “Journey to the West” has Wukong visit the Dragon King of the East Sea “Ao Guang”. Ao Guang belongs to the Ao family of four Dragon Kings, of the North, East, South, and West seas. Rioter “Sixtwo” said the following in the page announcing Ao Shin:

“Meet Ao Shin, a powerful storm dragon and guardian of the natural world. Legend holds that when Ionia faces its greatest crisis, Ao Shin will descend from the sky. Let’s start with the inspiration for his name: Ao is the family name of the mythological dragon kings, who rule water and weather.”

Riot took inspiration for Ao Shin not just with the name but with his character model, and also made him a “storm dragon” to loosely tie in with the Dragon Kings of the sea.

Getting back to the story, if you’d like to know what happens when Wukong and Ao Guang meet I’ve written a small summary, or here is a link to part of a quaint cartoon adaption, linked just at the moment the Monkey King enters the Dragon Palace.

In the story, Wukong is seeking a weapon, and so he visits Ao Guang, hearing of his great power as a Dragon King. Ao Guang gives him several weapons, each more powerful and heavier than the last, but each time the Monkey King says it is too light, and he wants more. Wukong starts to get aggressive, threatening the Dragon King, demanding a great and powerful weapon, and so Ao Guang panics, and directs him towards this great pillar, in the ocean, which was placed there by some god many thousands of years ago.

He says if Wukong can lift it, he can keep it. So the Monkey king walks up to it, and easily picks it up. When he says “change!” the pillar shrinks, into the size of a staff, but still with the same enormous weight, and so he gets his famous weapon. He then uses this staff to threaten Ao Guang into giving him some more amazing artifacts, such as his armour and boots, and leaves. Shortly after Ao Guang gathers his brothers to tell them what happened, and how he was robbed. They initially suggest fighting him, but he tells them of how powerful he is and the weapon Wukong holds, saying there is no way they could defeat him. And so they go to the Jade Emperor’s courts, complaining to him. This eventually leads to the famous scenes where Wukong is fighting against the combined might of heaven solo, and the rest of “Journey to the West” unfolds.

Now Wukong’s lore right now in game is kind of rubbish. It does feature some references to the original story, his origins being slightly similar, but all that Master Yi “wuju style” nonsense is just trash really. Remember when Azir was released and all those shurima lores were updated and changed? I’m hoping that when Ao Shin eventually comes, Riot will update Wukong’s lore, to include some fight between the two, some mention of their conflict.

Perhaps the reason Ao Shin joins the League is to fight Wukong, claim vengeance, and restore honor to his family name after the weakness of his brothers. So, knowing Riot, here’s how I think Ao Shin’s lore will turn out:

Ao Shin has a dark, secret past, and Wukong was maybe in it too.