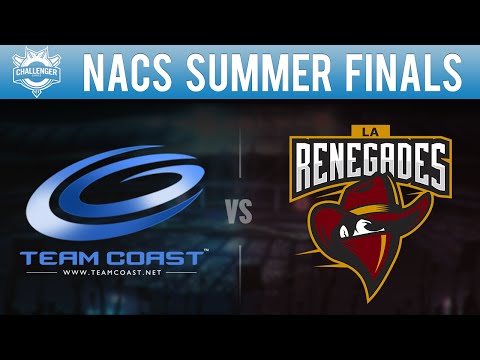 If you told me two years ago that Alex Ich and Crumbzz would be carried into the North American LCS by Velocity eSports’ AD carry and Curse Academy’s support, I would not have believed them. Here we are two years later, and the bottom lane duo of Maplestreet and Remilia (formerly Yuno/Maria/Shiro) have done just that. The North American Challenger Series finals between Team Coast and the LA Renegades ended 3-2 in an extremely interesting series of amazing plays and blunders alike.

Game 1 was a great start for Team Coast in this series. After a blundered lane swap situation that netted Team Coast an early first turret, LA Renegades got outrotated and outplayed with a composition that was to work around Alex Ich’s Zed getting pressure in mid lane and protecting Maplestreet’s Kog’Maw in team fights. Unfortunately, after Crumbzz helped Alex Ich secure an early kill on Pekin Woof’s Azir, Coast spiraled the game out of control. Cris’s Gnar punished RF’s Lulu every time he approached a minion wave, Mash and KonKwon took advantage of Kog’Maw’s weaker early game in lane, and Pekin Woof played safe enough to not allow Alex Ich to take over the game on Zed. Behind Shrimp’s Elise, Team Coast took game 1 handily.

Team Coast’s coach Saintvicious made the biggest blunder in this game: they gave Remilia her champion, Thresh. Renegades came back with a composition that fit their style a lot more: they put RF on a carry in Kennen, put Alex Ich on a safer poke champion (Azir), and gave Crumbzz a playmaking champion (Lee Sin) that added pressure that Nunu could not in game 1. This allowed RF to keep Cris’s Gnar in check, Maplestreet to get early lane pressure on Kalista, and spiral this game out of control for Team Coast, who were now trapped waiting for Pekin Woof’s Kog’Maw to ramp up. With several amazing Thresh plays from Remilia and a map completely in Rengades’ control, they took game 2 in a sub-30 minute effort.

Saintvicious seemed to have learned his lesson by banning Remilia’s Thresh, and it worked out as Renegades put her on a non-playmaking support in Janna, a major pick/ban mistake. Maplestreet pulled out his pocket pick Urgot in game 3, which with Remilia’s Janna struggled against Mash’s Corki and KonKwon’s Braum in lane. This also added pressure to Renegades’ jungler Crumbzz on Lee Sin, who would be forced to make the big plays. In a 2 v 2 in the top lane, Cris put down an amazing equalizer in which Shrimp was able to run away with two kills on Crumbzz and RF, whose Gangplank build choices were not only selfish but ineffective (going for Death’s Daughter as the first upgrade to his ultimate instead of Raise Morale). Alongside Cris’s amazing Rumble, Mash’s strong Corki, and Shrimp’s fed Rek’Sai, Coast snowballed game three with little difficulty.

With only one more win needed to make it back into the LCS, Saintvicious returned to their game 1 team composition with only one difference – they added Vayne for Mash instead of Lucian. Renegades returned to some things that worked in game 2 such as Maplestreet’s Kalista and gave Remilia a playmaking support in Morgana (since Thresh was once again banned). Maplestreet and Alex Ich (playing Kassadin) put on their carry pants, and this time around, Crumbzz was able to navigate and outperform Shrimp’s Elise on Evelynn. Maplestreet’s 12/1/15 Kalista alongside Alex Ich’s 9/1/16 Kassadin outperformed their lane opponents, and Mash was the only Team Coast member to get off the ground with 8 of the team’s 11 kills. It worried me to see RF on a more supportive top laner after game 1, but he proved that his Shen could hold strong against Cris’s Gnar, and he ended the game with an 87% kill participation and used several Stand Uniteds that won Renegades several team fights. Pekin Woof’s Azir, a pick that Renegades took away from him twice, got punished in lane early and never recovered. Maplestreet mopped up team fights alongside Alex Ich, Remilia landed clutch Dark Bindings throughout, and Renegades tied the series 2-2.

It was time for Team Coast and Renegades to put all their cards on the table, and it was disappointing to see Saintvicious allow Thresh, Remilia’s most clutch champion, to make it through pick/ban phase in game 5. They emphasized banning Maplestreet’s Kalista and RF’s Kennen instead of the champion that Renegades would turn to for playmaking. It was a mistake that probably cost them the series. Maplestreet proved that he could not only perform, but annihilate competition on Tristana, Crumbzz’s Gragas was the best we had seen from him all series, and Cris could not carry this game on Rumble. He missed a clutch Equalizer during a Baron fight that ultimately took this game out of control for Team Coast. I was also surprised that Pekin Woof chose to go back to Varus instead of sticking with probably his best champion Azir. KonKwon’s Alistar seemed a bit less practiced than the Braum he turned to in games 1-4. Barring a couple of awesome plays, Alex Ich’s Yasuo wasn’t amazing, but he did save Remilia with a clutch wind wall in the mid game. In the end, Team Coast lost too many team fights to end up victorious, Maplestreet mopped up wherever he could, and game 5 showed just how clutch the veterans of Renegades were.