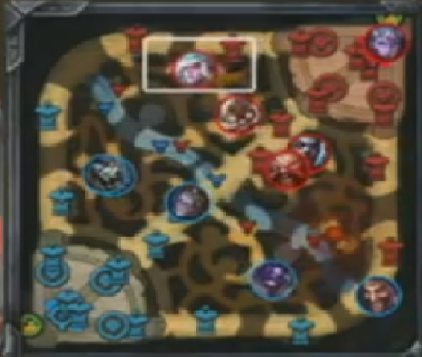 -Janna/Corki not the strongest lane, but fairly safe.

-Ali is a standard first pick in this meta.

-Gragas and Rek’sai are both left open and fairly equal in utility and usefulness, so no rush to choose them early on.

-Both teams opt to spread out across the map, watching entrances to jungle

-Wards are dropped at the entrances starting at 1:00

-OG takes advantage of CW getting bullied out of their blue side jungle, with Gragas/Ekko claiming both blue buff and gromp. Soaz joins OG’s bot lane in putting some early damage on CW’s top tier 1.

-Meanwhile, CW’s jungle/top lane clear their entire red side jungle, and rush to four man the bottom tier 1. Despite both towers dying at roughly 4 minutes in, OG comes ahead due to taking CW’s blue side jungle. Amazing also smote CW’s wolf camp and claimed the top-river crab, thus conferring not only a gold advantage but a vision advantage as well.

-Freeze choosing to stay in lane early on, instead of bullying OG’s jungle duo, granted him no CS advantage.

6:24 Amazing backs for the first time. Shook clears a ward in the river and loops through blue side tri-bush to the top. Clearing the ward, however, alerts OG’s bot lane to his presence on the top side of the map. That, combined with a pre-level 6 Rengar and a Janna for OG makes them none too worried about a possible gank from Shook. Shook wastes roughly one minute before grabbing the top-side scuttle crab.

7:45 Shook and Unlimited roam mid. The combination of Shook’s previous ward clear, his taking of the top-side scuttle crab, and Janna/Corki’s recent back left OG with only one top-side ward – in their tri-bush. This lack of vision, Alistair’s recent disappearance into the fog of war, Shook’s appearance on this side of the map a little over a minute ago and Varus’ inherent immobility lead to a relatively easy first blood on xPeke, who was leading Soren in CS by 17 at the time of his death. xPeke needed to be more wary of these factors and stay closer to turret until additional ward coverage could be provided.

8:00 Youngbuck returns bot after claiming first blood. He spots a pink ward in the bottom river bush and begins attacking it. However, CW’s vision around the red side jungle allows him to see Amazing and Mithy heading towards him. He pings the ward and continues back to bot lane. However, CW has no vision of the dragon area. Soaz recently disappeared into the fog of war after clearing a wave in bot lane. Mithy and Soaz capitalize on this lack of vision (and Youngbuck’s carelessness) and kill him once he enters blue side tribush. Youngbuck also blew his flash in the first blood kill on xPeke.With CW’s bot lane still top-side, OG claim dragon, blue side red buff and bottom-river scuttle crab.

9:50 After Youngbuck’s death and the subsequent taking of CW’s red buff, Shook finds himself hitting level 6 on Rengar in a highly warded red side jungle, as the picture above exhibits. This is a terrible position for Shook to be in for a multitude of reasons. First of all, Rengar’s ultimate is what makes him such a fantastic champion but it is completely reliant on taking your target off-guard. As previously stated, Rengar’s red-side jungle is heavily warded – thus, OG will know if he attempts to go bottom (although no such gank would be possible exactly at this time – it would require some waiting). Therefore, OG knows that if Rengar disappears into the fog of war, he will likely be on the top-side of the map. OG also proceeds to pink ward their top-mid lane bush, thus granting pink ward vision on both flanks of the mid lane.

11:00 Youngbuck is ganked again by OG’s jungle and bot lane. Through their knowledge of where Rengar isn’t via their superb ward coverage of CW’s red side jungle they are able to pull of this gank with complete ease. They also knew that Youngbuck expended his flash during the kill on xPeke.

11:40 With Unlimited assisting Freeze in the top lane, CW’s red side jungle has been largely unwarded (save for a miraculously surviving pink ward) for over three minutes. This has been pivotal in OG’s dominance in this side of the map. (It should be noted, however, that this pink ward really had no business in surviving this long, being in such a common spot. Apparently OG was too busy taking towers/Youngbuck’s life away to notice.) This lack of vision allows for another kill on Youngbuck. Soaz teleports only to find that Youngbuck is already dead – a misplay that could be punished under different circumstances.

14:40 OG take CW’s bottom inner tower. CW have no answer. Peculiarly enough, CW sent Soren top lane to farm the wave while Youngbuck is left mid. After a few Piercing Arrows, he is forced to back. This is a poor call, since dragon spawned while Youngbuck was at the fountain. While contesting the dragon would have been quite risky given OG’s slight gold lead and Corki’s TF spike, proper foresight could have allowed Youngbuck to shove top lane (with teleport up) and the rest of his team to work on vision control in lieu of contesting dragon. Instead, CW give up dragon and gain nothing.

16:04 Excellent vision control by OG allows them to spot Shook attempting to lane gank in the bot lane. OG’s emphasis on bot side warding is proven by the presence of three pink wards and three normal wards on this side of the map.

Meanwhile, Mithy takes advantage of the relatively safe status of the top side of the map and places three wards here – one at the bluff buff, one at the wolves brush and one in the top river bush.

17:25 Hiding in the raptor camp area, Soren lands a shockwave on xPeke. This was a bizzare decision, seeing as how Unlimited and Youngbuck were very low. The decision seems quite sporadic and desperate.

19:18 Shook actives On the Hunt for the first time this game. An odd decision, for he is only half HP. It seems he was attempting to catch either Mithy or Amazing as they cleared a ward in the blue side red jungle. Amazing Body Slams into the dragon pit and Mithy simply walks away.

20:05 Mithy and Niels are caught in an Orianna Shockwave. However, as with Soren’s previous ultimate, there is no follow up; Youngbuck was returning from the fountain and Shook was wandering around his blue jungle.

20:15 Amazing brazenly attempts to steal CW’s blue buff. Soren and Shook, despite being down both ultimates, manage to nearly kill Amazing and blow his flash. It’s possible that Amazing would have been able to get out alive by using his flash even if both Soren and Shook had their ultimates here, but they might have been able to burst Amazing before he had time to react properly. However, it’s also worth noting that Amazing might have not attempted such a casual blue buff steal had both the Rengar and Orianna ultimates been available.

21:36 OG claims the third dragon and sits comfortably with a 3.4k gold lead.

23:05 Shook and Youngbuck attempt to gank Soaz. While they managed to nearly kill him, Youngbuck opts to cast Wild Growth on himself, rather than Shook, which forces Shook to retreat. It’s possible that, had Youngbuck cast Wild Growth on Shook, Soaz might have still escaped. Still, this was a clear misplay and error in communication.

24:10 OG attempts Baron. CW contests, albeit not particularly successfully. Mithy’s Howling Gale prevents Unlimited’s Alistair flash engage. Shook activates On the Hunt and, with Orianna’s ball on him, flashes and jumps in. However, he overestimated the distance of Orianna’s ball and it proceeds to return to her, thus negating the possibility of a multi-person Shockwave.

After the engage, both teams (minus Soren) retreat. Soren invades OG’s red jungle and lands a two-man shockwave, which accomplishes nothing. Varus’ waveclear stops any chance of CW taking mid turret.

26:30 Shook activates On the Hunt, and CW charges down mid lane looking for a fight. However, Soren isn’t able to put his ball on Rengar and nothing happens. This team composition relies heavily on the synergy between Rengar and Orianna, yet Soren and Shook rarely seem to be on the same page.

28:27 Shook activates On the Hunt once more, and, with Orianna’s ball on him, jumps on Niels. Shockwave misses and Niels easily casts Valkyrie and escapes. Unlimited is caught out of position and dies trying to flank OG.

While Origen certainly played a very strategic game, I feel that the result of this game was more caused by some glaring mistakes by Copenhagen Wolves in both pick/ban phase and the actual game itself. A summary of these mistakes is as follows:

-The first thing that comes to mind is that Rengar was chosen after Janna was picked by OG. This is completely surprising since Rengar’s kit is fairly one dimensional – he’s going to try to jump on you, and Janna’s kit is completely designed to counter that.

-Rengar is at a bit of an odd place in the meta. Prior to this game, he was not chosen once this Summer in EU, NA or China. Korea, however, chose Rengar three times; two of those games were wins. Choosing a relatively off-meta pick for Shook, who is very new to CW, seems like a bit of a risky decision. Rengar is quite feast or famine, especially when you opt to build damage in lieu of tank items.

-The synergy between Soren and Shook was seemingly non-existent. Between Shook surpassing Orianna’s ball range, Soren not putting the ball on Shook and a few missed Shockwaves, their composition was executed quite poorly.

An Alternative to Rengar

-Rek’sai would have been a far better selection in this game.

-Rek’sai can build sightstone without sacrificing as much skirmish potential as Rengar. This would have helped mitigate the obscene vision deficit that CW found themselves in during this game.

-Rek’sai and Orianna have decent synergy.

-Rek’sai is a safer pick. With Shook being new to CW, trying out off-meta/item dependent champions should probably be avoided.

-The picture below says the rest 😉 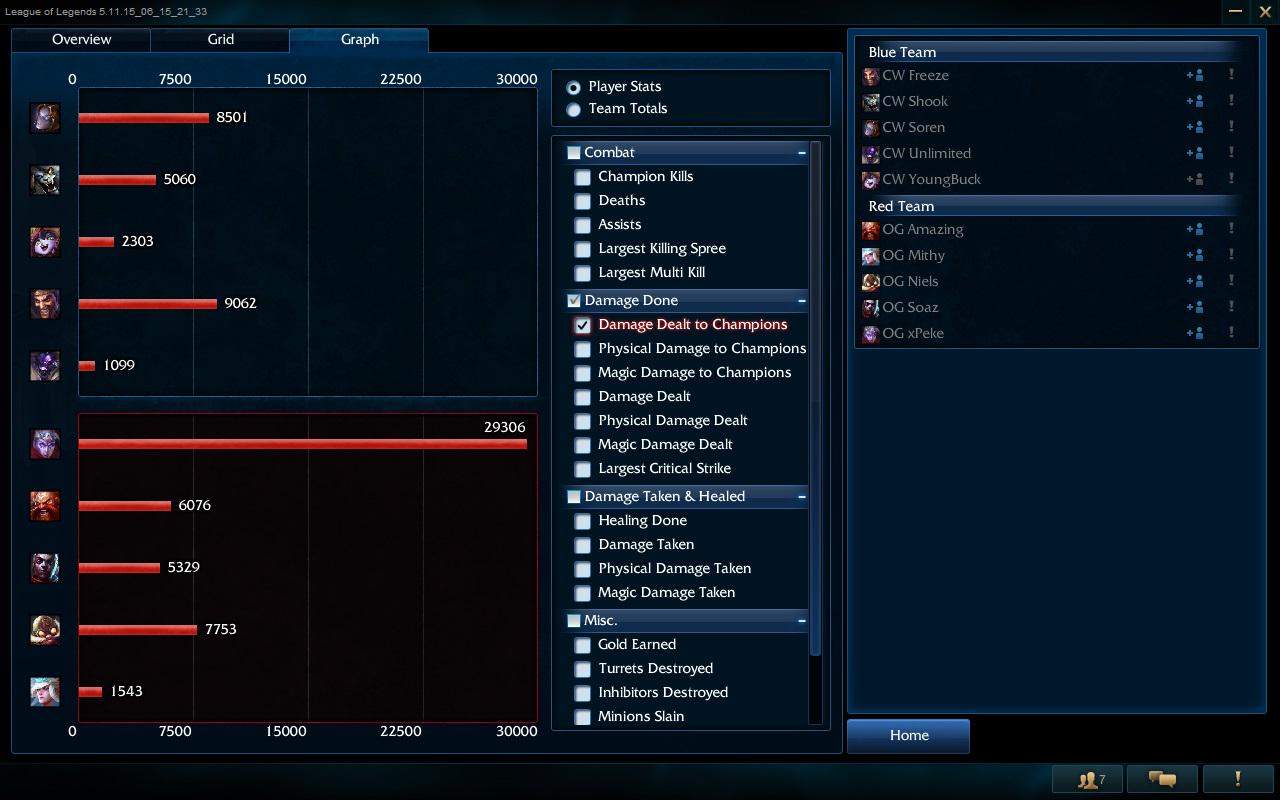 –We all know how talented Freeze is on Draven, but he brought very little to the table this game. Sivir would have been more fitting to CW’s hard engage team composition.

-Freeze has played a combined total of two Sivir games this Season – once in the Summer and once in the Spring. Both were losses. While hard-carrying on Draven might work against some teams, being able to play utility marksmen such as Sivir is a necessity. Being unable to adapt to shifting metas and clinging to comfort picks offers very little flexibility.

-OG’s vision control was stellar. They were able to maintain excellent ward coverage in CW’s jungle throughout most of the game. Their pink wards were well-placed and well-defended, lasting quite long.

-Soren should have considered picking up a red trinket during the mid game to mitigate OG’s vision in CW’s jungle.

-Despite not upgrading his Sightstone, Unlimited only placed five less wards than Mithy.

-Amazing placed 25 wards to Shook’s 5. Having two Sightstones is incredibly necessary 99% of the time in this meta. Once again, Rek’sai with Sightstone would have been better than Rengar.

Origen played a very calculated game versus Copenhagen Wolves. Their victory was wrought through superb vision control, an excellent early game and superior team composition. It’s not terribly surprising, however, considering that the Wolves recently acquired a new jungler. The recent Deficio/Dentist controversy has also surely created an abysmal team environment. Youngbuck recently tweeted that he is set to leave Copenhagen Wolves as soon as possible, so the result of this game wasn’t terribly surprising. However, Copenhagen Wolves has the potential to be a decent team should these issues be addressed.