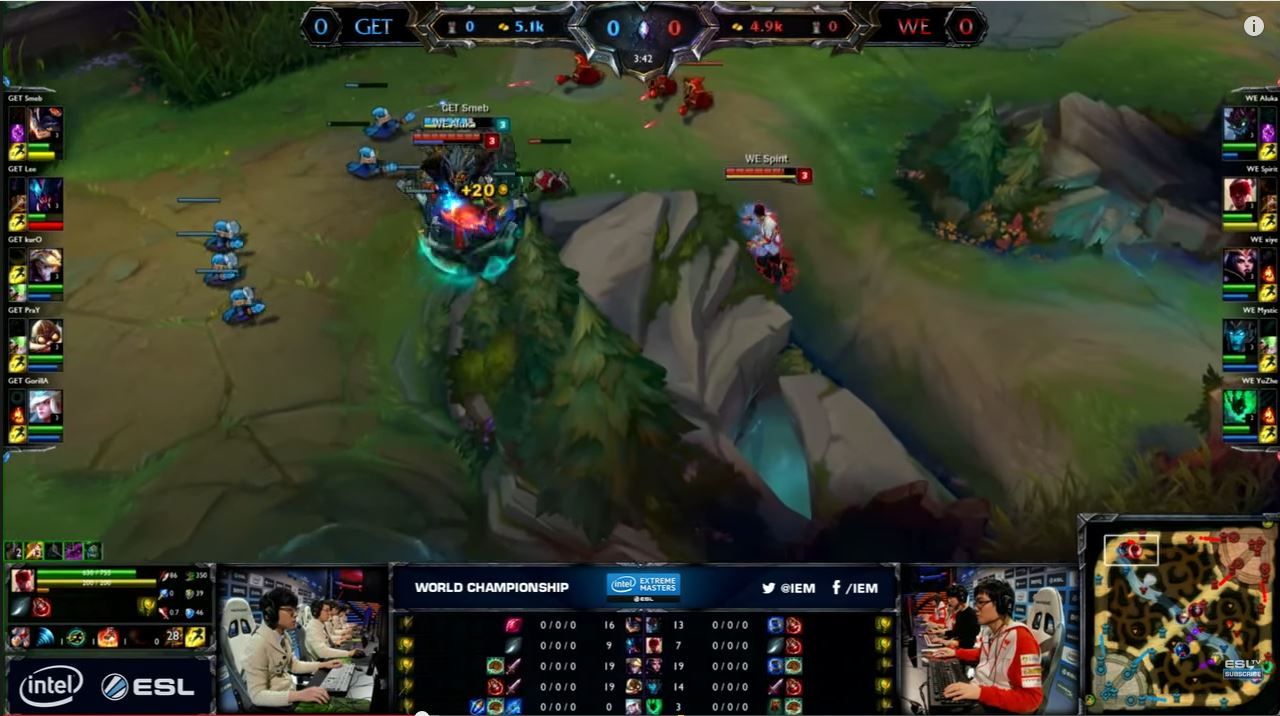 In an IEM World Championship full of surprises, no upset was bigger than than Team WE’s victory over the GE Tigers. WE was sitting at 12th place in the LPL, equivalent to a challenger squad in the LCS. Meanwhile, GE was first place in OGN, a spot that typically corresponds to the best team in the world. The fact that WE got to the semi-finals was shocking; for GE, the question was not “do they win” but “do they lose a game.”

But, as the saying goes in sports, “thats why they play the games” Some teams rise to the occasion. And some fall away under pressure, the first time they travel away from home.
We will break down key moments of each match individually, but start with general statements. Match 1 went in typical GE fashion; win in the mid-game. Match 2, they tried similiar tactics but failed due to an unfamiliar team composition. And Match 3 saw their decision making skills go out the window.
What was interesting is how Team WE got their largest early game lead in Match 1; Match 2 and 3 they snowballed off of mid-game skirmishes. The combination of Spirit’s jungle pressure and individual performances allowed them to fight and win in favorable situations.

Now lets go through some individual snapshots that show the important game moments. Rather than focus on team compositions (which have been broken down in plenty) lets look at specific situations.

We start with first blood in the top lane on Smeb.

Lets just look at the minimap. We see Smeb on Rumble, a champion with no escapes, playing quite far up in lane. The only ward coverage he has is in the river; so this lane gank from lee sin is completely unexpected. Team WE gets an easy first kill to start a snowball.

This is followed, after some more skirmishing, with xiye getting a solo kill on kur0. This is a basic outplay, with Leblanc having kill potential once Ezreal blows his escapes. That said, we also see Spirit coming towards the lane, ready to help clean up in case xiye needs help cleaning up.

This is the moment for WE, having converted their early game plays into a 4k gold lead. But GE’s coordination shines through; WE is split up and gets aced. GE is able to push this advantage into a slow siege and win, using the mid-game power they show in many of their games.
This game ends up with a win for the GE Tigers. But we also see cracks in their armor.
Both mid and top got picked on by potential jungle ganks. Lack of vision allowed Spirit to get around to good locations to try and make plays.
kur0 is also outplayed in mid; bringing up the game they lost against SKT, when Faker steamrolled on Leblanc.

We begin with first blood top on Aluka.

This time we see a dive for first blood on Aluka. GE has both support and jungler top lane; We see an immediate reaction from WE towards the dragon. This trade of objectives contrasts with what GE did in the first game.

Now a dive on Smeb. No vision and no objective for GE to match with.
This is followed by maneuverings around the map, with neither team getting an edge.

Which leads to the teamfight around dragon. GE gets split up, and kur0 never gets his ult off as Yasuo. GE’s lack of frontline also is an issue; compared to sion tanking lots of damage.

Now we have a teamfight with WE ahead (33:55 in video). But it is GE with the engage, Lee goes in for the knockup with kur0 following with an ult. Unfortunately, their team isn’t there to back them up. WE’s carries are able to escape with their lives, Mystic with Ezreal’s shift and xiye away from the damage already.
This advantage is carried through for the win by WE.
We see the game stay even up until the mid-game teamfights, but this time it is WE that takes the decisive advantage from them.
GE looked uncoordinated (possibly from the yasuo pick). They also have a heavy engage comp, which is somwhat countered by WE’s.
WE has an easy comp to teamfight with, with a strong frontline and mobile carries. Mystic and xiye are able to show their solo-queue skills without requiring fancy coordination.
Which brings in question, why fight at all? GE may have been better off not engaging at many of these fights.

The match begins with a first blood in the mid lane, on kur0. He aggressively distortions forward, losing his escape. Spirit is waiting on the side, undetected by wards, and flashes in for the kill. This is the risk of agressive play when there is no jungle pressure to back you up.

We see Lee over extend into WE’s three man squad and get killed. Looking at the map, we see a 4v3 in favor of GE, with Mystic in bot lane, but on screen we see a 3v1 in favor of WE. This matches some of the teamfights in Game 2, when Lee would overengage without team support.
Things continue to unravel for GE, with Smeb giving a kill to a gank at 13:21. This allows WE to pick up the top turret and continue their snowball. Xiye gets a solo kill on kur0 in the midlane (16:17), and GE respond by trying to dive Aluka. But he gets away, and WE picks up mid tier 2 turret as well.

We see two final teamfights, of which this is the first. WE is able to keep Mystic alive long enough to win the fight. Its still closer than it maybe should be, considering the 6k gold lead.

The final major fight occurs at 26:05, with Smeb diving onto Spirit and the rest of the team slow to follow up. This picture shows a 4v2 in favor of WE, in terms of who is actually fighting. WE cleans up with 2 kills and the baron, and closes the game out.

Conclusions:
When discussing team strength, we typically look at two factors: team coordination and strategy, and individual player ability. This matchup represented those extremes.
The GE Tigers were known for their brilliant strategy and coordination, winning games through smart mid-game play even when at a disadvantage. The players, though quite good, are not individually the best in their roles.
Team WE literally has two members who are the best individually, according to our best judge of that fact. Mystic and xiye are both top 5 on the Chinese solo queue ladder, an outstanding individual accomplishment. However, this indvidual skill contrasted with a team that had never played a competitive match together.
This series showcases both strengths; individual talent gets WE ahead, and team coordination brings GE back. Unfortunately for GE, their coordination and strategy fell apart in 2 games out of 3, causing them to lose the series.
In more general terms, we are again reminded that rarely is a team strong in both areas, and if their strength is nullified they will lose. Whether that be internal (player underperforming, poor communication) or external (focus on shutting someone down, smart strategical counters).