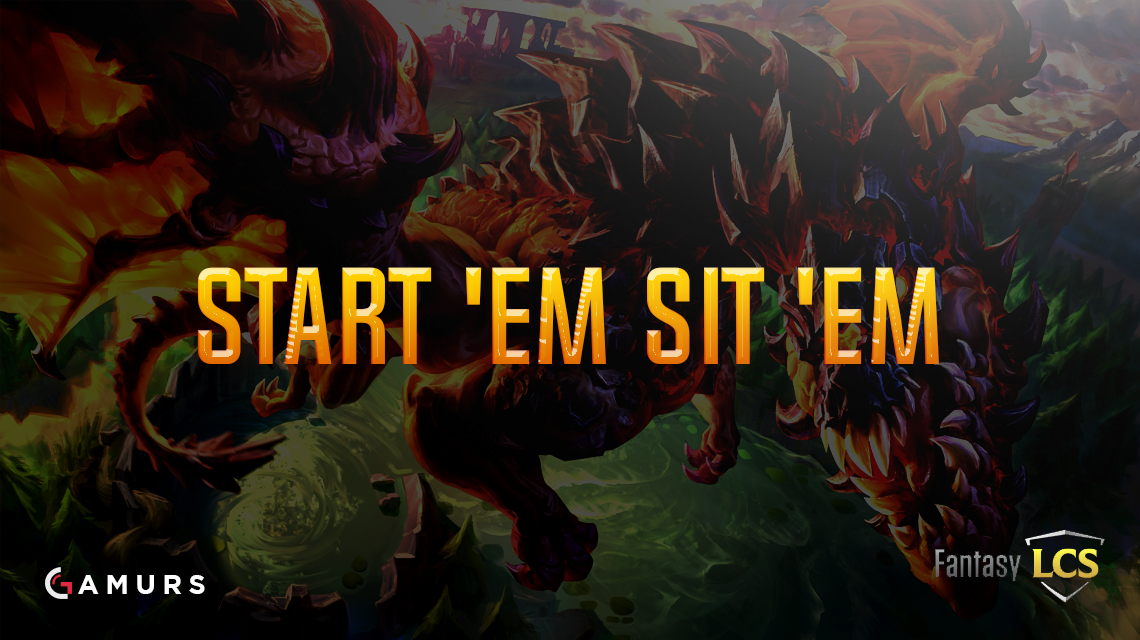 The first week of the League Championship Series is in the book, and teams are beginning to write the history books and fill the stats sheets, making writing this article ever easier. The European rosters lock very soon, so cross check this with who you have going into this weekend before things lock down.

To begin, we should note that arguably the top four teams in Europe in Splyce, Fnatic, G2 Esports, and H2k-Gaming all play only one match this week due to the EU schedule. All other teams will play the normal two, as will all North American teams. This is not something I will usually take into account, but rather something to keep in the back of your mind when setting your roster. Riot also provides varying scoring systems to get around this, so check to see which one your league is using and go from there.

Ssumday is coming off a week one showing that earned his owners 38.56 points, and earned himself two MVP awards. Dignitas has two matches on either side of the spectrum, with their first match being against Team SoloMid on Friday, Jan. 27, before they head back to the LCS studios to play Echo Fox a day later. While the 38 points was right around the middle of the pack, I’m expecting similar, if not higher, numbers this week. TSM looked shaky in week one, and they are going to have their first taste of action against a brand new Dignitas team. Win or lose that match, Ssumday and the rest of Dignitas will learn some stuff and should carry that over into the match against the struggling Echo Fox.

The 17-year-old jungler broke into the LCS with quite the performance in week one, with 33 points against TSM and 17 against Dignitas. From the end of week one to now, nearly 2,000 fantasy players haved added Contractz to their roster. Although, you may look at Cloud9’s schedule and question what to do for week two. C9 will play Counter Logic Gaming and then Immortals. With the way C9 and Contractz played against TSM, I’m not too worried. Even if Contractz does not match his high week one output, he is still someone you have to put in your lineup because of his upside potential, and relatively low floor considering what he has shown so far. He’s 17, and starting for Cloud9 in the LCS. He has talent, so it is hard to bet against him.

Misfits currently sit in second in Group A, behind only G2. This week, like Dignitas, they will play two teams on either side of the spectrum. Their first match will be against ROCCAT, the team who currently sits in last place in their group, and averages the third fewest fantasy points per game at just eight. After that very favorable match, they play G2, the defending EU LCS champions and the team they trail in Group A. It will be a big match for them, and you know they are preparing hard for it. I do not expect them to win, but I do expect the team to not lay down and get steam rolled. The majority of Alphari’s points this week will come from the ROCCAT series, but the G2 series should not be a complete dud. Combined, they should make for a solid week from the British top laner.

AlexIch played for Team EnVyUs as a seemingly last second sub in week one, playing in the mid lane while Noh “Ninja” Geon-woo moved to the jungle to replace Nam “LirA” Tae-yoo, who was having visa issues. LirA is back now, and EnVyUs’s lineup should be back to normal, meaning AlexIch will likely not be playing. Even if something happened and he did play, however, starting AlexIch in your fantasy team would still be a bad idea. EnVyUs will play Phoenix1 and Immortals, who both currently sit at 1-1. If AlexIch were to play this week, and he likely won’t, he’d be facing off against Phoenix1’s Yoo “Ryu” Sang-ook and Immortals’ Eugene “Pobelter” Park, two top-tier mid laners in the NA LCS. If you start AlexIch and he does not play, you lose. If you start AlexIch and he does play, you still lose.

The Unicorns of Love kicked off their 2017 campaign with a very nice looking 2-0 win over Team Vitality. Though things get tougher for the Unicorns, who now have their first two match weekend of the split. The team is scheduled to play Origen and H2k-Gaming in the upcoming week. Origen is 0-1, but that one loss is to H2k, the currently undefeated leaders of Group B. Vizicsacsi is a player whom, for now at least, needs to be looked at on a week-by-week basis. With Vizicsacsi having to go against the top scoring top laner of week one in Andrei “Odoamne” Pascu, I expect him to struggle. I also do not expect the Origen series, which is not even an automatic win for the Unicorns, to make up for what I envision to be a low scoring series versus H2k. It is best to wait for a better week to start Vizicsacsi.

Who are you starting and sitting for this week? Let us know in the comments below or tweet us @GAMURScom.