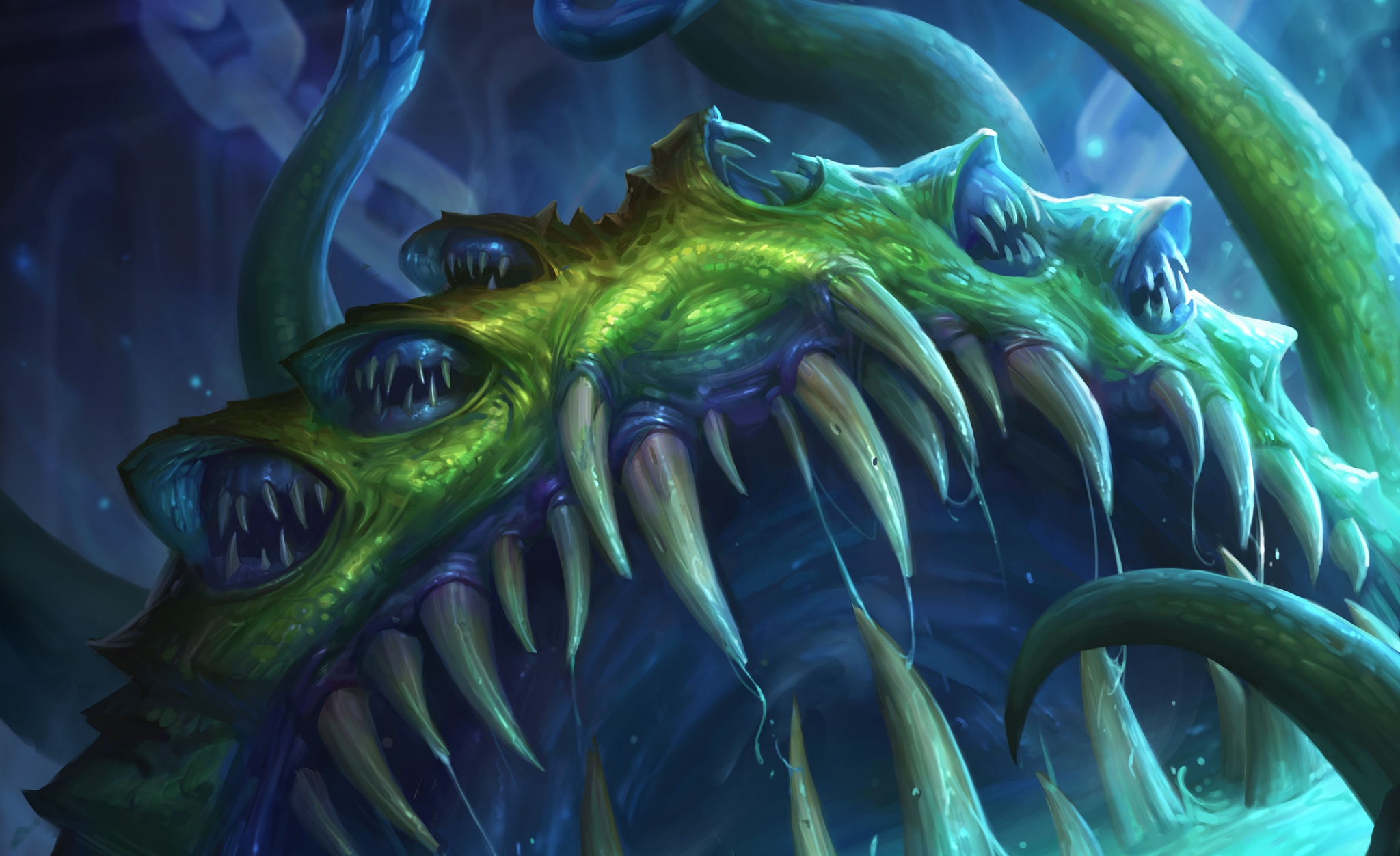 Last weekend at the HTC Summer Preliminaries, Manny “Dude_7597” Eckert suffered one of the worst losses I’ve ever seen in Hearthstone. It was Zoolock versus Token Druid, and he had a full board of powerful minions like Darkshire Councilman, Possessed Villager and Imp Gang Boss. All he had to was survive his opponent’s desperate Yogg-Saron, and he would win the game.

Unfortunately, the very last card Yogg casted was a super clutch Maelstrom Portal, destroying all of Eckert’s threats and immediately losing him the game.

This was obviously spectacular, and one of the things that makes watching competitive Hearthstone fun. But we’re due for a serious conversation about Yogg-Saron in the pro scene. Blizzard has always made randomness a part of its design philosophy, but there’s never been anything in the game that combines unregulated chaos and formidable power quite like Yogg. We’ve seen bans on specific things in other esports—Meta Knight was famously blacklisted in Super Smash Bros. Brawl’s heyday. Is it time to remove Yogg from tournament play? We caught up with Eckert to get his perspective.

First things first, tell me a little about yourself. Where are you from? How old are you? How long have you been playing card games?

I was born in Rochester, New York, but my parents and I drove across the country when I was three weeks old to be with family in Seattle, and I’ve lived my whole life here. I was born in 1997, hence the 97 of my username, so I’m 19 now. I started playing Pokemon in elementary school and progressed to Yu-Gi-Oh, then Magic, but I started to move away from card games when I reached high school until my friend suggested Hearthstone to me midway through my Junior year. I started playing and I was hooked.

Was that the worst Yogg of your life?

Not even close. A couple days after Whispers of the Old Gods came out I was playing Freeze Mage and offensively Alexstrasza’s a Hunter. He went all face to put me to four without popping my Block and then Yogged. The first spell was Swipe, and even though I had Alex on board, he hit my face to pop Ice Block. Then he got Bash, and Lay on Hands targeting his own face to heal up to 26. On another occasion, I was playing vs Jan “Ekop” Palys on ladder, Aggro Shaman vs Druid. Ekop was at one health without a single card on board or in hand and I had a full board. He topdecked Yogg and got Twisting Nether and Healing Wave on his own face, winning the joust, of course. Next turn my Feral Spirits got counterspelled from Yogg and then he topdecked Ancient of War. I just got outskilled. Those are probably the two worst Yoggs I can think of, but Druid is so popular nowadays I lose games to Yogg on a daily basis—Flare, Ice Block, healing spells targeting face, etc.

What went through your head when you realized you were losing a game to some truly unfortunate RNG? Looking at your reaction in the moment it seemed like you were devastated.

When I saw that he was innervating Yogg I guessed I was going to lose because that’s just the nature of the card. I knew he hadn’t played many spells, though, so I was hopeful that my board would remain intact, but Yogg had other plans. I just felt frustrated and helpless. I wouldn’t have minded as much if I had misplayed, but looking back on it I was pretty sure I didn’t make any mistakes in that particular game.

Do you think Blizzard intended Yogg-Saron to be a good card that would see play in high-level competition?  Do you think the pro scene should consider banning some super swingy cards like Yogg?

No one knows exactly how much testing Blizzard does before they release cards, but I’m guessing they do quite a bit, since they only release a couple sets each year. And even after seeing only a couple games with Yogg in the deck, it’s obvious the card is broken, so I can’t imagine Blizzard didn’t realize it would see competitive play. Especially when they make a point of highlighting Yoggs from tournaments. I think Blizzard wants Yogg to be a popular card, unfortunately, because it’s entertaining to watch as a spectator. I would personally love to see a ban list for cards such as Yogg, Tuskarr, and Barnes that decide the game based on RNG, and I believe many other competitive players feel the same way.

Why do you think the community has been hesitant to ban cards? We’ve seen cards get banned in Magic and Yu-Gi-Oh, why not Hearthstone?

Almost everyone I know in the competitive Hearthstone community wants Yogg banned. I think Blizzard is the only thing preventing Yogg from being banned, and I think they’re doing it for the same reason I mentioned before: Yogg is an entertaining card to watch for a spectator, and additionally, it’s a fun card for casuals to play with. Most people who play Hearthstone don’t even pass the rank 15-13ish mark every season so it makes sense that Blizzard would rather cater to casuals than pro players.

In the future how do you think Blizzard should handle RNG in card design? Do you prefer super open-ended cards like Yogg-Saron. or more limited effects like, say. Flame Juggler?

Obviously I want Hearthstone to be more based on skill than randomness. I don’t mind most of the minor random effects in the game, but when Tuskarr decides the game on turn three and Yogg completely reverses a game which otherwise was unwinnable, that’s when I feel like shutting down my computer for the day. Random effects will always exist in Hearthstone, and to an extent, they make the game more fun, but I hope the Blizzard designers listen to the pleas of competitive Hearthstone players all over the world and print fewer random cards in the future, or somehow combine randomness with skill, like they did with the Discover mechanic.