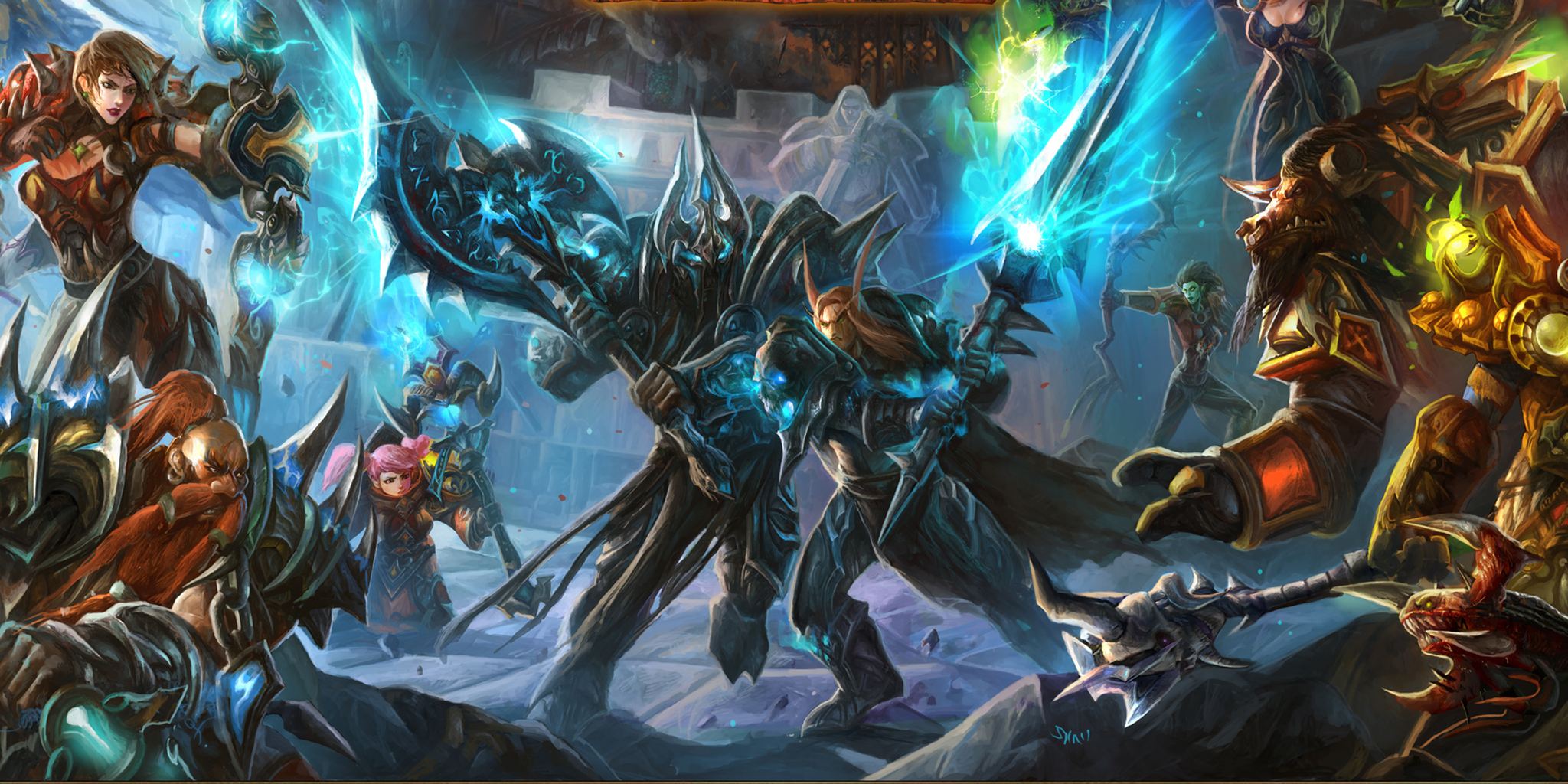 The Curse of Naxxramas was one of my favorite expansions in gaming. It took something all Warcraft nerds loved—the pre-expansion Naxxramas raid and Wrath of the Lich King—and revitalized it in a way that seemed impossible. Taking a raid that formerly required the delicate maneuvering of 40 people in top-of-the-line gear and turning into a casual solitaire card-battler looks like a very bad idea on paper.

But I’ve learned to never underestimate Blizzard’s ingenuity. Somehow it engineered all the encounters in the MMORPG version of Naxxramas to feel the same between two decks of virtual cards. If you needed more reason to put faith in Hearthstone’s longevity, this was it.

We don’t know what Blizzard’s plans are for Hearthstone. So far the company has released both the massive Goblins vs. Gnomes expansion as well as the Curse of Naxxramas 30-card injection. I certainly hope it doesn’t abandon the solo content. I like a small, focused, thematic pack of new minions and spells. Plus, World of Warcraft has so much memorable content to draw from, it’d be a shame if Naxxramas is the only one to enjoy a renaissance. Here are a handful of dungeons and raids from the Warcraft universe that I’d like to see built into Hearthstone.

This one makes the most amount of sense given the template Blizzard set up. Originally, the Monastery was divided up into four distinct wings, which is perfect considering the tiered system introduced with the Curse of Naxxramas schedule. You had the Graveyard, the Library, the Armory, and the Cathedral. See? A slow curve upwards in relevancy capped off with the ravings of one Renault Mograine.

Specifically though, the reason Scarlet Monastery seems like a shoo-in is that the requisite nostalgia is already in place. Naxxramas made sense on a structural level, but it also carried a lot of wistful feelings for vanilla World of Warcraft, when it represented the most dastardly raid in the entire game. Seriously, I still have nightmares about Patchwerk wipes. The Scarlet Monastery was a beloved leveling dungeon, so much so that members of the Alliance would routinely make the ridiculous hike through the Horde-controlled Tirisfal Glades to run it. I don’t have any numbers on this, but I’m comfortable saying that the average Hearthstone player has more fond memories of downing Whitemane than they do with, say, Cho’Gal.

If Blizzard is going to move forward with these solo adventures, this seems like a pretty obvious one to hit.

One thing I didn’t mention in regards to Naxxramas (the WoW version, not the Hearthstone one) is that it was originally released as the grand finale in the pre-expansion raiding tier. So unless you were in one of the top guilds on your server, you were probably still wiping on Fankriss while Kel’Thuzad loomed.

Blizzard, perhaps realizing its mistakes, would later release a retooled Nax as an introductory raid in the Wrath of the Lich King expansion. It guaranteed everyone saw the content, albeit a few years late. It was a great idea, and something that would go on to inform Blizzard’s design philosophy indefinitely. If you’re going to spend months working on a great dungeon, you ought to make sure nobody is excluded. Because who knows? Maybe years later you’ll want to make an expansion to a card game themed after an adventure everyone can remember.

Karazhan fills that same niche. It was the starter 10-man raid in Burning Crusade, taking place in the austere mage tower of Medivh somewhere in the desolate Deadwind Pass. To me it was one of the most creative things Blizzard ever did with instance design, with encounters ranging from straightforward dragon fights to bizarre, fantastic angles like a ghostly chess match or the carnivorous opera. As a WoW fan and a Hearthstone fan, I’m absolutely ready to pilfer through those marble halls again.

I’m basically including all of these dungeons in the same grouping, because they all kind of scratch the same itch. Deadmines is not even close to being the best encounter Blizzard ever designed, but for many people it was there first. You were level 18, there was a chance this was your first RPG ever, and you found yourself healing a suitably epic trek into the depths of Westfall.

Those introductory instances might not have the same weight as, say, Blackwing Lair, but the nostalgia factor is undeniable. I don’t think there’s anything more iconic in World of Warcraft. Of course there’s the issue that Deadmines in particularly already has a number of its denizens (Sneed’s Shredder, VanCleef,) already adapted to Hearthstone cards. But whatever, the venerable Game of Thrones card game wasn’t afraid of releasing multiple versions of the same character. There’s no reason for Hearthstone to hold back either.

It’s hard to know if this is my personal nostalgia talking or not, but Zul’Gurub was the definitive casual raid in an era where 40 players were required to tackle the significantly more daunting Molten Core and Blackwing Lair. Zul’Gurub asked for a paltry 20 explorers, which opened the end game up to a number of enterprising players.

Zul’Gurub does suffer from not having a particularly lore character. I mean, your final boss was Hakkar, who you only know about if you’re way too invested in the universe (guilty,) but I reckon enough of the Hearthstone constituents have at least a vague memory of The Raptor Boss or the Panther Lady. So it’s maybe one of the softer things Blizzard could adapt. But I’d certainly be stoked.

This needs to happen. Maybe not right away, considering we’re just coming off the very Scourge-themed Curse of Naxxramas, but Blizzard has to put The Lich King in Hearthstone. I mean. It’s Warcraft. How is the most iconic figure in the history of the lore not in the game? Deathwing has a card, Illidan has a card, Grommash has a card. So where’s Arthas?

Part of me thinks they’re saving him for an all-new Death Knight class somewhere down the line. It’s not a bad idea, but Blizzard have said repeatedly that adding new characters is the last thing from their mind. And Icecrown Citadel was a great raid! Everyone remembers the moment they toppled the Lich King’s throne. It’s perhaps the most transcendent story moment in the history of World of Warcraft. Reliving that journey, even in an abstracted card battle, is well worth the effort.

So I don’t necessarily want to see Highmaul itself transferred into Hearthstone. After all, we’re talking about a raid that’s maybe three months old. But I do think it would be interesting if going forward, Blizzard would release Warcraft patches concurrently with Hearthstone expansions. If you don’t know, pretty much every WoW patch is headlined with some new raiding tier. Exploring those encounters in both MMORPG and card game form at the same time sounds like a lot of fun. I wouldn’t be surprised to see Blizzard try something like that during the grand finale of Warlords of Draenor, whenever that may be.

Long before the days where Blizzard would drop a new raid every couple of months, patch day was far more modest. You weren’t getting Firelands, or the Siege of Orgrimmar. Nope! You were getting Battlegrounds! Or the Deeprun Tram! Or casual five-man content like god intended!

Yes, all the way back in patch 1.3, Blizzard released Dire Maul. A massive, cavernous Elven ruin with three treacherous wings to explore. Real heads will remember the awesomely convoluted Tribute run, which involved chicanery, disguises, and a claim on the Ogre kingship. Basically, Dire Maul is the exact sort of dungeon Blizzard won’t design anymore. And it was amazing.

A reimplementation into Hearthstone makes too much sense. It’s easily split up into distinct sections. It has the storied history that will resonate with crossover fans. And none of its bosses or characters have been made into Hearthstone cards. I feel like this one is inevitable.