Today is the day for the new Tavern Brawl this afternoon my time. Blizzard made a major announcement to the game that is sending waves that appear to be similar across the board in that some half are for it and half are against it. The developers have announced a format similar to Magic the Gathering with standard and wild play.  This is similar to standard and extended to certain extend in Magic the Gathering. At first glance I am ok with it but I agree it is going to cause some waves to Beta players like myself. I think I had a feeling it was coming but I did not think it would come this quick. Tournament players don’t worry because I am sure they will do a standard tour and an extended tour at some point. Now on to Tavern Brawl this week. Today is Blingtron’s Beauteous Brawl.  Blingtron is ready to rumble. He Changes your hero power to “get a random weapon.”  He also gives you random weapons. I to think a moment before deciding which hero to take advantage of this. I have decided to go with my trusty Paladin to begin. I decided on a secret/mech Paladin to begin. I quickly switched to a warrior. The game starts out with both players at thirty lives, ten armor and a foam sword which is a two/two weapon. Each player starts off with a hero power cash in which destroys your weapon and replaces it. This new Tavern Brawl is definitely different and new. My first thought is how to take advantage and abuse this format lol. As you know I pride myself in winning 100 or more Tavern Brawls every week. First cards that come to thought that are useful in my opinion are

Harrison jones as you draw cards based on your opponent’s weapon durability. I initially tried other weapon destruction at first but when you destroy your opponents weapon he gets a new one so scratch that. I find this is a late game scenario so plan to make the game last as you have better cards at your disposal. I found quick game decks tend to concede quickly as this is a late game format. I spent 20 minutes for the first win but most of that time was changing the deck and conceding sorry. Sometimes you have to modify your deck at first quickly. I like the Warrior pirate deck and will go with that today. I did earn my free pack within twenty minutes so now I will spend the rest of the time modifying to get a 100-win Tavern Brawl deck that I average every week with less than 2 hours played per day.

After further play today I have decided on the Warrior as my final choice today. I will evaluate further play and post info as it occurs the rest of today. I have maintained a win percentage of fifty percent so far as I left games quickly to modify and make a better deck. I have Faced Hunter which I will not play, Rogue which is viable, Paladin not sure as I tried it at first, and mainly other Warriors. I’ll be honest mirror matches are tough and require good play on your part, in other words don’t make mistakes. I think the most powerful Warrior is currently utilizing pirates.  I will post my deck I am using and hope you guys enjoy the success I am with it and I hope to pilot it to 100 Tavern Brawl wins this week. I will let you know in my other article This Week in Hearthstone. Go check it out. I must let you know if you play against me today I apologize as I write while playing. I have been able to maintain a win rate of over fifty percent but as the day goes it is slowly improving. I will add that in this format games can be very quick depending on starting hands. IN my opinion you opening hand is crucial here in this format of Tavern Brawl. Pirate minions are very beneficial in a Warrior deck but I think they would be good in a Rogue deck also. I am not a fan of spells in this format but time will tell especially if I die to spells. I think card advantage is important here so I will employ some forms of card draw. I really think pirate flourish here in this new version of Tavern Brawl. I can’t begin to explain how pirates have won me so many games and weapon destruction does not work here in my opinion. I spent time with a Rogue. Warrior, and Priest. The warrior is my first choice, then Rogue, and Priest. I always believe you can win Tavern Brawl with any hero but the decks tend to use similar minions. The major differences being the hero specific cards. The Tavern Brawl meta stabilizes some on the second day. I usually spend the first 10 games constantly changing and tweaking deck to my tastes. I did manage a fifty percent win rate throughout the first day even with conceding quickly at first to tune deck for some wins.

There are a few cards I would like to point out the I believe should be in every deck. 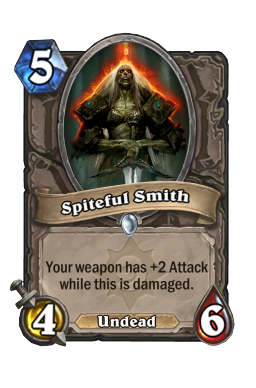 spiteful smith. I am not a fan of the ooze in this format due to when you destroy you opponents weapon they immediately gain a new one.

I stated earlier I started off with a Paladin but quickly changed to Warrior. I prefer heroes here that have cards that give weapon bonuses.  The choices are Warrior, Rogue and Shaman. I like the Warrior and Rogue here the most. I stated earlier I believe any class of hero can win in this format, but I just prefer my choices.

I think this week will be interesting and I strive to get a minimum of 100 wins in Tavern Brawl. I am not sure how close I will get as with the added armor and weapon every turn tends to add to game play time. Some games do end quickly in concedes depending on game start but for the most part games are just flat out longer here. I have noticed you can tell the outcome of the game fairly quickly so that may assist in less time spent per game. I will keep an eye on average game time and post my findings in the comments section once I have average based on my own games. I encourage you the readers to post in the comments your average time played also. The more information we get will give us all a better idea. I will post my Warrior deck but keep in mind this time it’s very different from non-Tavern Brawl decks and based on my assessment of the meta currently in the Brawl. The meta is wide and can change quickly here but I think my deck is a good starting for most.

That is all for this week in Tavern Brawl. Look for my other articles., check out the authors especially LordZhark as he writes on Tavern Brawl also. Peace out from Texas.