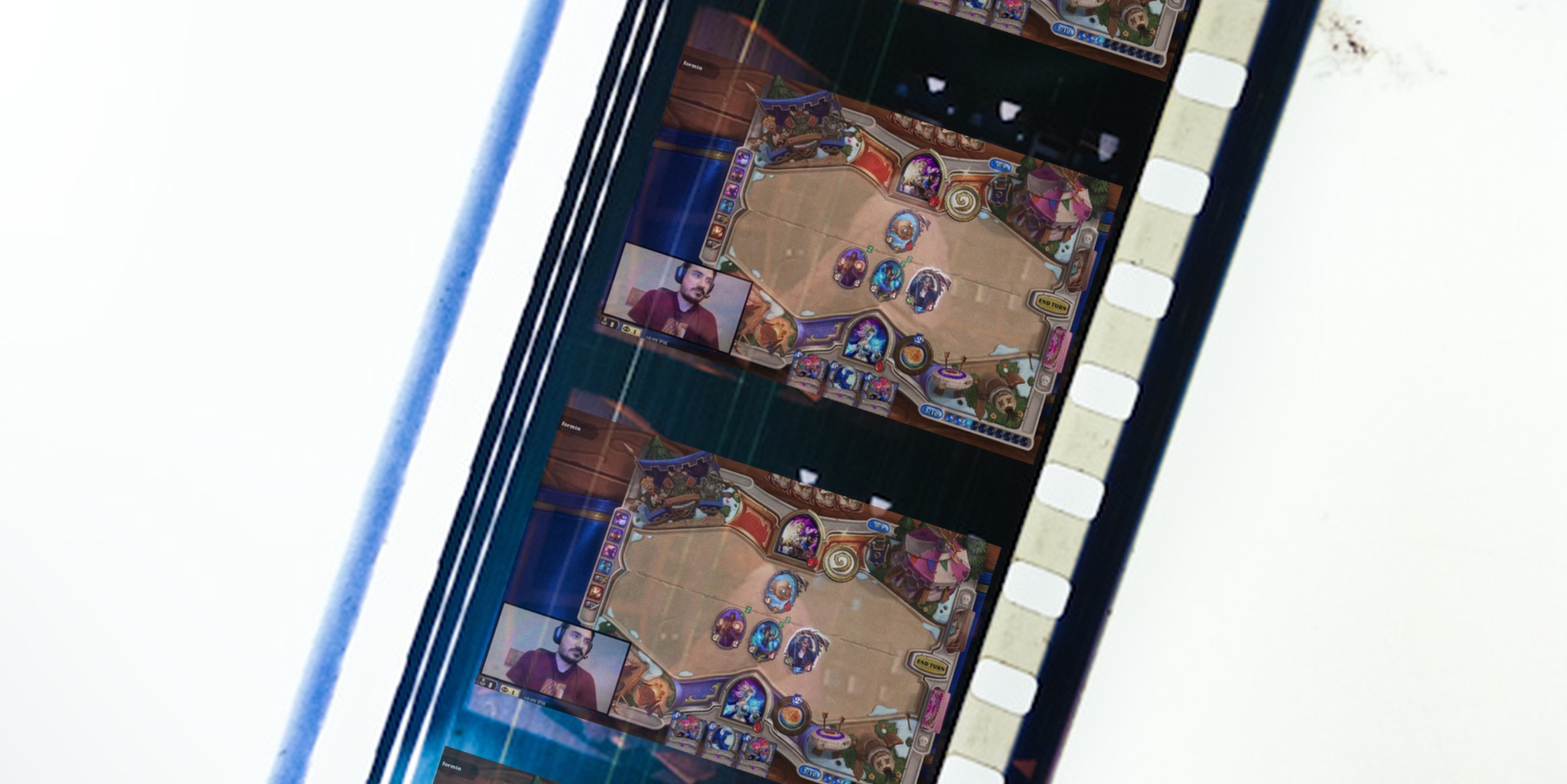 No matter what you think of his job, there’s no denying that JF works incredibly hard.

The 17-year old Montrealer behind the Best of Hearthstone YouTube channel says he puts out about four videos per week. And it’s not easy. After scouring YouTube and Twitch for clips, he spends four to five hours of work editing them. That’s 16 to 20 hours per week—just in the editing—for a channel that has a modest 3,000 followers.

The format is simple and consistent: a loose collection of aggregated Hearthstone content all centralized on a certain theme. Most of the time they focus on a particular streamer, like say, “The Best of Kripparrian” or “The Best of Eloise.” He first got interested in fostering a YouTube presence after being inspired by a friend’s pro League of Legends channel that follows a similar philosophy.

Highlight channels have become something of a cottage industry on YouTube. And it’s obvious why: With billions of hours broadcast on the two communities every year, there’s real demand for videos that catalog and make consumable all that content. That “Best of Kripparrian” video, for instance, has nearly 100,000 views—and it’s only one of five. But remix and highlight videos actually occupy a knotty and precarious legal position. As passive and apathetic as it might seem, a stream of someone playing a videogame is protected by copyright. Siphoning off highlights from other people’s streams and chopping them up into a video with a Soundcloud trance mix might not have the same protection.

According to YouTube’s fair use policy: “You need the copyright owner’s permission to create new works based on their original content. Derivative works may include sequels, translations, spin-offs, adaptations, etc. You’ll probably want to get legal advice from an expert before uploading videos that are based on the characters, storylines, and other elements of copyright-protected material.”

It’s easy for a streamer to make a DMCA claim stating that JF is violating their copyright. It wouldn’t be a slam dunk. But highlight compilation videos certainly do fall in a legal grey area.

“Luckily, I’ve never encountered someone who was upset about me using their content,” JF says. “I’ve always made sure to give credit to whoever I borrowed content from to make sure that there is no conflict. If a streamer told me to delete my video, I would obviously do it by respect.”

JF isn’t trying to hurt anyone. He’s just a kid who loves Hearthstone. But you can see why some find it troubling that people can make money from what is, essentially, a reposting operation. No royalties, no questions, just a flat, blind profit sharing agreement between YouTube and YouTubers. There are tons of video game highlight channels out there—the guy behind “WTF Moments” keeps enterprises for both Heroes of the Storm and Overwatch—and as long as this weird cottage industry remains unregulated, the cash will continue to flow.

“I would feel better if they asked about it beforehand, and it depends how they are using it,” says Cong “StrifeCro” Chu, a prominent Hearthstone streamer and pro player. “I don’t want people to just take content from my stream and put it up as a video, but if it’s used along with something else as a part of a whole piece then I’m usually OK it. The way it is right now is fine for YouTube, if the content creator reports it then it will be taken down.”

This isn’t an issue that’s only facing video games. There’s a YouTube user called FreeDawkins who uploads complete NBA highlights almost every day during the basketball season. But that’s different. FreeDawkins is providing a service. You’re not going to be able to find something like, say, the complete Andre Roberson mix from the Western Conference Finals because the NBA isn’t going to make that readily available on a laissez-faire video sharing platform. It’s still stealing, but it’s more Robin Hood in tone. Whenever someone curates StrifeCro’s content, you’re watching stuff that he’s already made readily available on his Twitch or YouTube. It feels a little less egalitarian.

“I could see myself [requesting a takedown,] especially if it happens a lot and they’re trying to monetize your content,” says StrifeCro. “A small channel trying to use your content for their own gain isn’t free advertising for you and it doesn’t benefit the Hearthstone community in any real noticeable way.”

One of the biggest controversies of this debate surfaced last year with a particularly rowdy channel called WizardPoker. Owned by a 25-year old Dutchman named Arnold, WizardPoker focuses more on the social aspect of the Hearthstone community. If someone like Sebastian “Fors” Forsen or Andrey “Reynad” Yanyuk found themselves in any of that classic, contemptuous Twitch drama, you could count on WizardPoker to get the VOD up quickly. There are a lot of people that follow Twitch communities for the stagecraft between personalities, and Arnold profits off that niche.

“That’s what kept me interested in the streams,” Arnold says of the “social highlights” he shares on his page. “I always enjoyed Reynad’s streams for this exact reason as well. He is the man known for stirring drama in the Hearthstone scene, nobody will disagree with me there.”

Part of the issue comes from the fact that YouTube is simply a better platform for sharing VODs. Arnold says he loves covering dramatic moments “because everyone on Twitch wants to know what happened, and they want to watch that on YouTube. My channel basically enabled people to catch up with all the interesting stuff that happened the days before.”

This is in pretty stark contrast with other Hearthstone highlight channels. A personality might not like it when Best of Hearthstone repurposes a clutch Mad Bomber in a compilation, but they’re probably not going to feel bullied. WizardPoker on the other hand, preserves some pretty unflattering moments. For instance, one of his most recent uploads is simply a clip of Kripparrian offering some ignorant nutrition advice.

“Drama moments inevitably involve emotions, resulting in a situation where I would upload something where a streamer would not always be proud of,” Andrew says. “For 95 percent of the streamers, this is not an issue. I mean, they will not always be proud of what happens on their stream, but they would also know how once a video is out there, you cannot undo what happened.”

This culminated one day when Arnold logged on to see that a company belonging to Reynad had made a copyright claim on two of his videos. The claim held up, and his channel was given a strike. For six months Arnold’s channel was put under stringent restrictions. This happened at a time when he was working on WizardPoker full-time, which obviously affected him financially. He tells me that if Reynad had asked, he would’ve considered taking the videos down amicably. Instead he was served papers, and frankly, didn’t have much of a case.

Arnold said he sent Reynad an email “explaining the implications for my channel” and asking him to remove the strike. He also promised he’d never upload any more clips from Reynad’s channel. But “from the way he responded to my request, it was quite clear to me I had to cope with six months of channel restrictions.”

Arnold admits that Reyand had the right to strike his videos. Content creators should be allowed to control where their brand goes. But you can tell he still feels a little bit miffed about the situation. “Some streamers are really protective of their content, others simply don’t give a damn. Most streamers enjoy it being featured on a fan channel like mine, which is essentially what my channel is,” he says.

A fan channel, yes. At the end of the day WizardPoker and Best of Hearthstone exist to serve the community. But they’re also turning a profit, and that certainly can rub the people featured in those channels the wrong way.

YouTube does pay out royalties on music, regardless of who uploaded the video. Baauer collected a percentage of the ad revenue on all the “Harlem Shake” riffs from a couple years ago. This works because YouTube has an automatic flagging system to detect when a master recording is being used. Maybe there’s a future where that technology can detect Reynad’s face when he shows up on other channels and make sure he’s properly compensated—but that’s obviously easier said than done.

There are a number of options on the table. Maybe royalties are the answer, or maybe YouTube and Twitch should make videos harder to download and edit. But frankly, those are all band-aids. The record industry and the film industry have both given up the battle of squashing every exploit and loophole that leaks their product. In 2016 content is free, and that’s not going to stop any time soon. Maybe instead of finding a solution, we just need to get used to the reality.