Hearthstone is getting me bored these days. Don’t get me wrong, it is nice to have new cards added to the game, but what I really have been wanting to do is experimenting with Dragon Paladin, and its been really hard so far because of this random release system they have of “weekly wings”.

I know it’s a nice business idea, because they actually are able to divide the whole adventure pack in small wings that allows people to buy them separately, but this 4 week wait got me ultra bored. The first week was nice, gotta give you that but after it we got what? 1 card in 2 weeks!

Well, all of this is about to change, since we’re into the weeks that matter. Weeks 4 and 5 are adding real cards to the game, the 4th week even more than the 5th because all the cards added to the game this 4th week are good and game changing.

This article is going to be all about Dragons, because fuck everything else, I want Dragons!!

Here, you guys will find my theories about all Paladin Dragon Builds that will be playable during these 2 weeks… Well, come to think of it, maybe we can end up figuring some other nice list along the way that is not Paladin, but at the time I am writing this introduction, my plans are to only write about Paladin.

Oh yeah, before moving on (and I am writing this mid-next section, at this point I already know I am posting different lists other than Paladin) I would like to remember that there will be other theorycrafting Articles regarding Dragons in this website, not because we’ll see people talking about the same thing, but because its nice to see other people’s opinions and ideas too, since all of this is just about theory!

chromaggus, the Dragon I liked the most in this set is out! Just to say, this is a Control-only card, and for that matter we’re only going to see him in Heavy Control Decks. This guy is very similar to 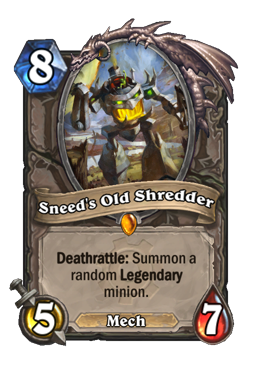 sneeds-old-shredder in function, but slightly better, which makes me believe that any deck that wants to run Sneeds will want to run this guy as well, but since most decks don’t want 2 Sneeds, this guy might end up totally replacing it in these decks.

Blackwing Technician to our Control decks as some kind of better early game defenses than we currently have combined with other optimal Dragon cards.

Whenever we think about Heavy Control, the first thing that comes to mind is Warrior. The biggest problem with it is that Warrior Control lacks draws to keep up with unfair decks such as Druids, that keeps on drawing cards while dropping threats on the board, and Warrior Control only has 1-for-1 removal at best against this type of deck. This issue has not been solved during this adventure pack, so I am not sure if Warrior Control is going to be able to keep up with the other decks, even if we are able to successfully add a Dragon Subtheme to the list.

Since the future is a big misty maze, we still must try every single way so we can find the actual path, and thinking of it, I decided to try to form a nice Control Warrior List, obviously with a Dragon Subtheme, and this is the Result I came up with.

Basically, since we can’t have nice Draws early in the game, we’ll have them with our bros Ysera and Chromaggus. I like this list a lot, because you dont need to run other heavier threats on your deck, since you’re playing some earlier Dragons, and you still get the extra card draw which is nice, the more I look at this list, the nicer it looks.

Moving on to Paladin, which is the obvious Dragon Host, we’ve finally had the other nice Dragons (outside of

Volcanic Drake) being added to the game, which makes us believe it is time to start making Dragon stuff for real!

With this said, we got the real 4-drop Dragon as well as Chromaggus, which allows us to finally run 6 Dragons on our standard Paladin without Hurting it, and this is the initial list I came up with:

Basically, we picked the perfect Mid-range Paladin list, and changed a few cards to support the Dragon sub-theme. The Paladin Deck itself isn’t bad, it’s actually really strong: I have seen a lot of people top 10 Legend with this deck. So I believe upgrading it into something stronger allows us to keep it competitive with the other post-BRM decks.

As I said before, I am still unsure if 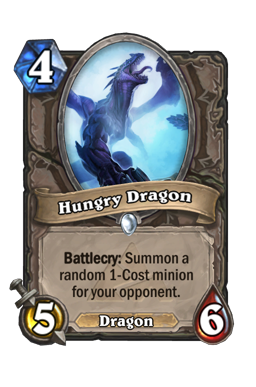 hungry-dragon is going to be a thing or not, because as said before: It helps Aggro. This makes it so this guy isn’t always a decent play like Piloted Shredder is, and I don’t know if this guy will be able to be as good as the Shredder. However, I don’t believe Volcanic Drake is going to be a decent replacement for this in case it backfires and doesn’t work, because the Drake itself is more of a Control Dragon card than a Mid-range one, so we’ll be in deep trouble in case this deck doesn’t work.

As for the Mulligan, the only thing I can say is that you should mulligan exactly as you would mulligan for the standard Paladin Mid-range deck, but instead of keeping that big Dragon in hand just because you have the Technician (which I know you want to!) I would recommend you not doing it, because the odds of drawing a Dragon until the moment you can cast it is still very high, given how 6 out of 30 is still 1/5, and the more non-Dragon cards you draw, the higher the chances of getting an actual Dragon in the next draw are. Oh yeah, you should keep that Hungry Dragon in your starting hand in case you have a Technician indeed.

Take Heart, young one, Week Five is Near!

But but, how about Week five Nuba-san?

The biggest things being added in Week 5 are:

blackwing-corruptor. These guys open up for even more possibilities. Volcanic Drake is a nice Control-ish card, while the Corruptor is just another addition to Dragon Decks overall.

I have been discussing with some friends the impact Volcanic Drake is going to have in the game, and while a lot of people (me, included) got really hyped by it, my friends quite seem to think it is not going to be that good, because as a 4-drop (given this guy’s ability makes it so it’s an actual 4-drop, instead of a 6-drop) it dies to Shredder, and the Shredder will still generate Value from its death while the Drake itself won’t give its owner anything. Well, that can be true, but as the matter of fact, Volcanic Drake has other nice implications that people have not been noticing, as being a Post-Sweeper threat. By running this guy into Heavy Control decks you’ll be able to play it after stuff like:

hellfire and so on…. Being able to wipe a full board and drop these guys costing 2 or less is huge, but we still don’t know if this situation is going to be a real thing or not.

With all of that said, we will still need to test this guy, therefore I decided to make a couple of Lists that can playtest this guy:

These 2 lists are heavy Control lists. The Paladin list, much different from the one I posted the section before, focus a lot more on board Control, while the Warrior one is most likely just an updated Version of the previous one.

Again: A control list, so no Combo, you’ll win by dropping big Taunts on the board and overcoming your opponent by playing stronger and faster cards than he does, just like the standard Control Druids does.

I wish I could run Blackwing Corruptor in this list, but Druids just can’t run Volcanic Drake, because the Drake’s ability doesn’t synergize well with the Druid class.

None of the lists posted here are actual existing lists, they’re just Theorycrafting, because at this moment of writing the 4th wing hasn’t been out yet. Regardless of this, I believe these lists are good initial playtest subjects that you guys will be able to adapt as you move through the ladder.

I hope you guys enjoyed reading this, it was pretty fun writing all this theorycrafting and all, but playing these decks will be even more fun! Hope to see you guys around in the Ladder, playing these lists and, who knows, making them better!

Love you guys, will probably discuss these lists on a later article after all the wings are out and I have time to actually playtest them!