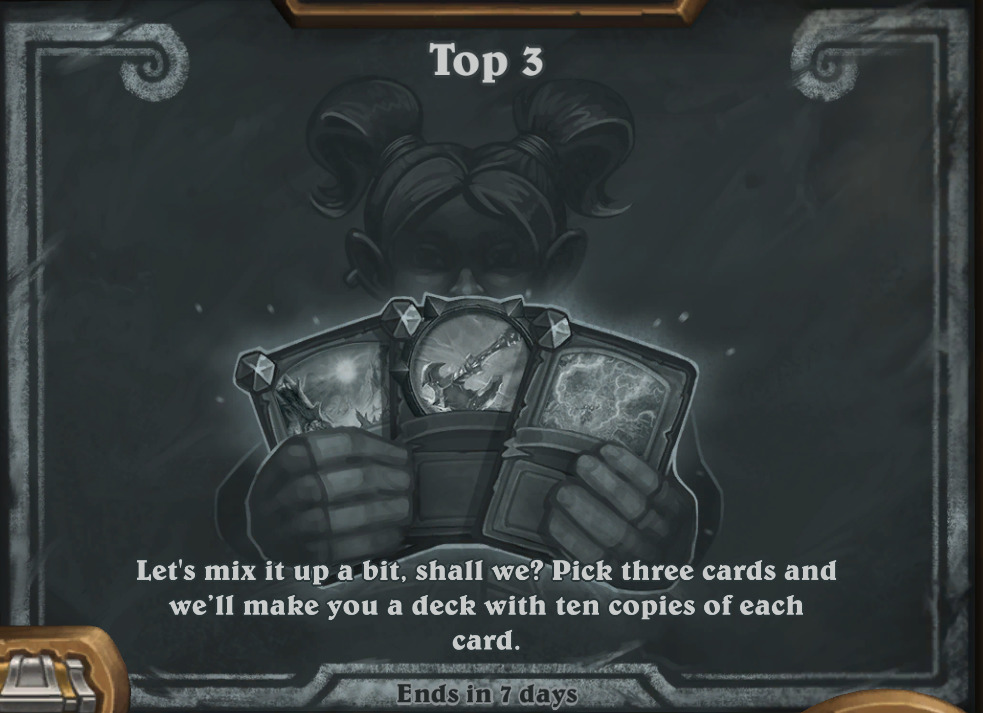 Every Wednesday, Hearthstone’s Tavern Brawl mode has a weekly challenge that players can partake in to claim a free classic pack. This week’s Tavern Brawl makes its third appearance after almost an entire year: Top 3.

In this Tavern Brawl, players construct a custom deck by picking three cards. They’re also allowed to use Wild Cards. After picking their three cards, players get 10 copies of each card.

Since this Tavern Brawl focuses on broken combos due to the streamlined nature of these decks, picking cheap cards that work together will be your key to success. While every class has strong tools, some combinations are more busted than others.

Rogue, for example, can pick Pogo Hopper, Shadowstep, and Secret Passage/Mimic Pod. This allows you to play multiple Pogo Hoppers for only one mana, which will cause your opponent to struggle with the onwards scaling threat.

Druid can build Embiggen, Patches the Pirate, and Parachute Brigand. If you activate multiple Embiggens on turn one and play any pirate, your board will be filled with massively buffed Patches in an instant.

While other classes have strong tools (like Paladins with Aldor Attendant, Libram of Wisdom, and Hand of A’dal, or Mechwarper and Voracious Reader), these two previously mentioned classes easily offer the best strategies. While certain strategies may counter those two classes, like Doomsayer, Ice Block Mage, or Earth Shock Shaman, their effectiveness is only against these strategies, which will make their popularity narrow and not often seen.

Players have until Wednesday, Sept. 2 to earn a victory and get a free classic pack before next week’s Tavern Brawl arrives.