We’re still quite a few days away from the biggest changes this game will get since release, yet people are already thinking on how their favorite classes will play after that, what changes they must do, and everything else related to the big meta shift that is going to happen after september 22, thinking on that I decided it was good to release an article trying to make some predictions regarding that meta, and what deck choices are going to be the bests.

Remember this is a theorycrafting article, and as such does not contain 100% precise material, rather my predictions on what I think is going to happen.

Predictions on the Meta Game

Hunter is getting nerfed and will not be played by anyone but Hunter lovers, FOTM players will most likely move to whatever they feel its going to be the best deck. Keep in mind that whatever big streamers play during these first days will be played the most, everyone will be copying lists all over the place rather than trying to make their own., as it uses to be.

My guess? Handlock is going to be the center of attentions during the first week after the patch: Without Hunters, the Handlock will have a pretty good time playing against very few counters and dominating the ladder together with some Control decks we will be seeing.

Then, we have to remember today’s Miracle Rogue is also out of the Picture: No more Leeroy OTK shenanigans all over the place. That also means Control decks will be back with strength and fewer counters, Control Warrior might also be played, same with Priest control and Ramp Druid.

Tempo decks will have almost no place here, remember Naxx gave us a lot of new taunt cards, and the reason decks such as Zombie Priest exists was the total dominance that hunter had in the ladder, we have to remember that these decks are very meta-oriented and not that consistent by themselves. I presume we’ll see Control Priests being played more often now that Miracle is gone.

Aggro might also make a comeback in order to prey on the Control spam we’ll be seeing after the patch.

Consistency is the key, try to build your decks always considering

the-black-knight in their core, but remember some decks don’t need(or don’t have slot) for some of these cards.

Alright, in this part of the article I am going to try to suggest some decklists for you to play after September 22th, keep in mind these lists are focused on the meta we might be seeing after the nerf and are not optimal for the days before the patch.

The Handlock is the deck we know will see a lot of play during the first week, and if you are one of those players that miss your giants as much as I do, this build is the build for you. (Rhymes, bitch!)

This build is focused on playing the Mirror Match more than anything, because that is what we’ll be seeing, so I made a few adjustments: Removed the

the-black-knight(even if we are not playing the Mirror, everyone will be playing taunts.) as well as added the second

ancient-watchers or to silence oposing threats, in the mirror match our biggest target is going to be

Just to remember most of the decks will be predicting a Warlock meta (both Zoo and Handlock (and with it, other controls too))

unstable-ghoul‘s value to be diminished now that we wont be seeing UTH+Buzzard combos all over the place anymore, so I decided to go back to the dual

whirlwind, also notice this version is more focused on the Control mirror match  than anything else, but at the same time it still has all the good tools to deal with aggro.

Alright, so Controls are back, which means Shamans are also back! Probably the most missed class, shamans were literally dead after Naxx came and hunters became so dominant, the reason being Shamans didn’t take as much advantage from Naxx as all the other classes, Shaman’s mechanisms are all better than 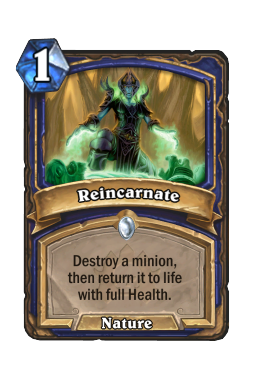 reincarnate, so at best shaman was a mediocre class in the Hunter meta.

But now, that we might see a rise in Control, shamans might be once again playable, you’ll notice I added a

big-game-hunter to the list and you might think it’s not that needed, but I have to disagree. You’ll need extra answers to big finishers and BGH helps with that, I also took the liberty to raise the curve a little bit by removing 2 slots of the possible 3 or 4 drops and adding

sludge-belcher to the core. Shaman is also not that strong against Aggro, we have to remember that, and no meta will change it, but with a rise on Control we might see shaman as a consistent pick for both laddering and Tournament.

Just in case you want to use

reincarnate, swap them for

This is the first part of the 2-parts article I made. To continue on reading be sure to check back tomorrow for Part 2!