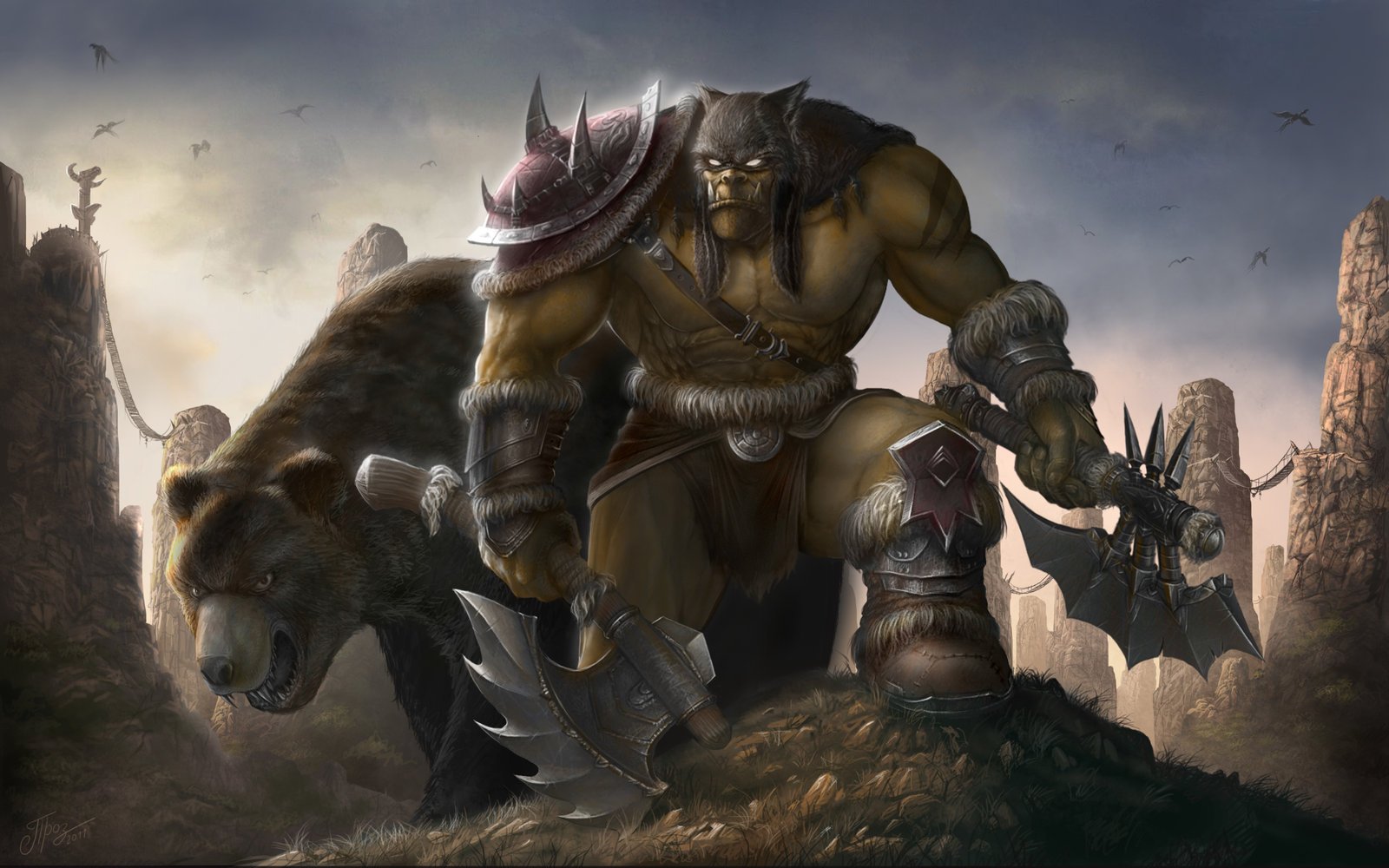 Rexxar, Champion of the Horde, is a half-ogre, half-orc beastmaster of the Mok’Nathal clan and may be one of the clan’s last born half-ogres. He saved the city of Orgrimmar from the hatred of an enemy of the Horde. He was instrumental in assisting the Horde after the fall of the Burning Legion. Due to his mixed lineage, he is a towering and massively muscled warrior, and he wields his two huge axes with tremendous skill and ferocity. Rexxar is always seen with his loyal bear companion Misha.

Rexxar’s mask bears a striking resemblance to the character Darkwolf from the 1980s cult classic animated film Fire & Ice. He is voiced by Chris Metzen.

Alleria Windrunner is the eldest of the Windrunner sisters, all of whom have served Quel’Thalas and the Alliance with distinction. She also has a younger brother. Alleria always wears a necklace given to her by her parents, an exquisite piece containing an emerald, a ruby, and a sapphire. Alleria worked closely with Turalyon and Khadgar in the campaign to expel the orcs from Lordaeron.

Alleria is a superb forest fighter who prefers solitude and travels with others only when forced to do so. She speaks infrequently and only in short sentences.

King Krush is a huge, extremely dangerous, and rare Devilsaur that stalks Sholazar Basin. His unique appearance and elite status attract many hunters seeking the challenge of taming the great beast, while the prestige associated with slaying him attracts members of all classes and factions.

Long ago, when trolls used to occupy the land of Tanaris, they built up Zul’Farrak, the sand troll city in Tanaris, with a sacred pool. From that pool, the trolls summoned the huge hydra Gahz’rilla, so fierce that even her scales crackle with energy. The trolls worshiped her as a deity, but the summoning of Gahz’rilla is a well-kept secret of the trolls. Gahz’rilla is said to be a demigod. A large number of ornaments have been modeled after the beast Gahz’rilla. These ornaments are called “Gahz’ridian”, after the hydra demigod.

She became the waterlord of elementals, attacking Thunder Bluff and Stormwind City, then known as Kai’ju Gahz’rilla. She is always at the same place in the Zul’Farrak. Horde and Alliance players can fight her after they secure the capital. If the name is closely examined it sounds like “Godzilla”. It also bears a close resemblance to Godzilla’s opponent Ghidorah.

The Two Jormungar, Acidmaw and Dreadscale, are a boss pair making up part of the Beasts of Northrend encounter in the Trial of the Crusader and Trial of the Grand Crusader raid. Jormungar are creatures that can be encountered in Northrend. They have muscular, flattened bodies with rows of crystalline spines along either flank.

According to the Vrykul Astrid Bjornrittar, the Jormungar are the children of the titanic watcher Loken. Further legends tell of the Nerubians using the Jormungar as creatures of labor, forcing them to carve massive tunnels through Northrend’s subterranean ice and lay the groundwork for the Nerubians’ ancient civilization. With the fall of the Nerubian empire, swarms of rogue Jormungar ran amok, drilling through the region’s permafrost, attacking surface dwellers, and devouring everything in their path. The Jormungar no longer serve the Nerubians, undead or otherwise, in any capacity. However, the Nerubians have, Scourged Burrowers, similar creatures with a similar function.

Which one of these exceptional Hunter characters is your favorite and why? Let us know in the comments below.

Stay tuned for the next part of the series featuring the first bunch of neutral legendaries.