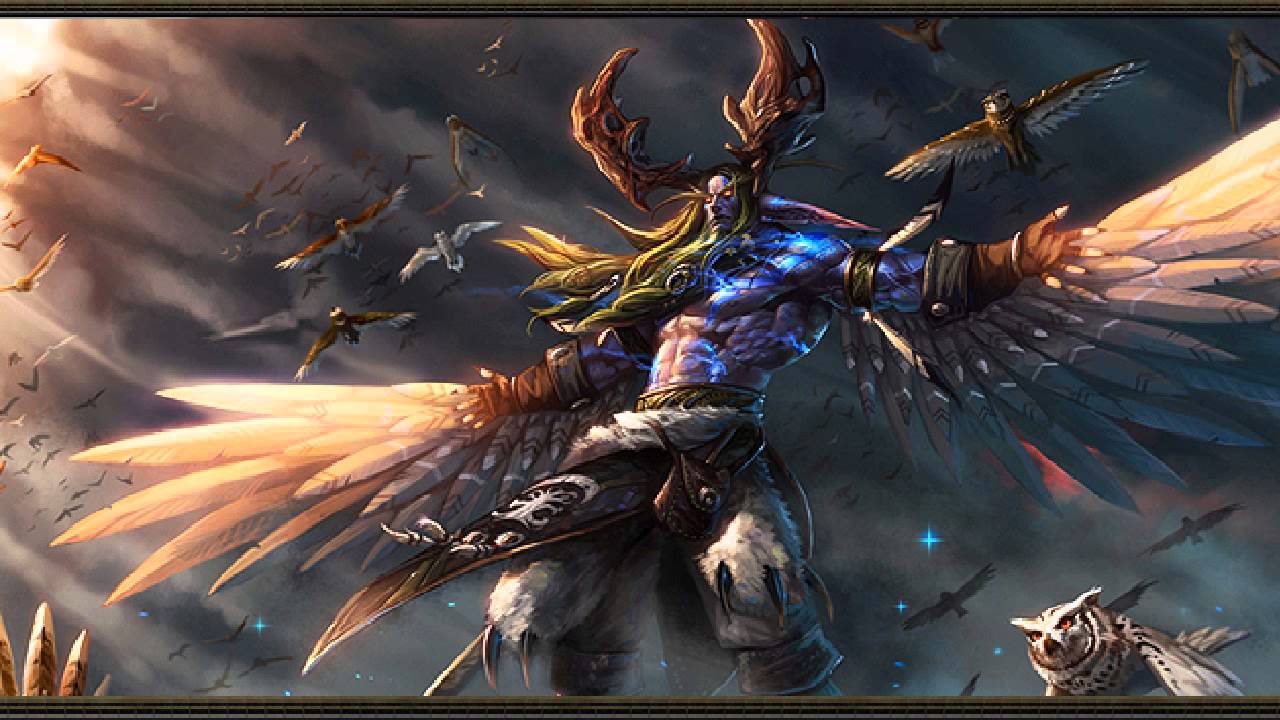 We all certainly love to see legendaries pop in our decks and hands and even admire their graphics and their awesomeness, but what is the lore behind all these characters? Many World of WarCraft fans may already know, but some Hearthstone players are not familiar. Let’s find out a little bit of information about those legendary cards. We will start off with Malfurion Stormrage’s legendaries as well as himself.

Malfurion Stormrage was the first night elf Druid and initiated the mainstream use of Druidism among the night elven people ten millennia ago under tutelage of the demigod Cenarius within Val’Sharah. Through Malfurion’s guidance, the night elves managed to successfully halt the Burning Legion’s first invasion of Azeroth during the War of the Ancients. In its aftermath, he became the greatest of the world’s arch-Druids. Malfurion Stormrage is the twin brother of Illidan Stormrage, as well as the loving and beloved husband of the high priestess of Elune, Tyrande Whisperwind. Together, the two have represented the highest leadership of the night elves ever since the fall of Queen Azshara and her Highborne caste. Malfurion is often referred to as shan’do, which means “Honored Instructor” in Darnassian. Connected deeply to the ebb and flow of all life on Azeroth and bearing ten thousand years of responsibility and experience, he is one of the most powerful and venerated mortals of the Warcraft universe. He is voiced by Ed Trotta. Chris Metzen commented that Malfurion Stormrage is his personal favorite character in the Warcraft lore

Cenarius is the Lord of the Forest and patron god of all Druids regardless of race (along with Elune and Ysera, his mothers, for the night elf Druids). He is one of the most powerful and influential demigods of Azeroth. Cenarius is the son of Elune, goddess of the moon, and the demigod Malorne (yes all the names mentioned so far are already part of the Hearthstone card collection). His daughters are known as the fey dryads and his sons as the wise Keepers of the Grove, or simply “keepers”, including Keeper Remulos, Ordanus, and Zaetar. The name Cenarius could have possibly come from the word “Centaurus”, Latin for Centaur. This would be quite fitting, given his anatomy and his connection with the Warcraft centaurs. Alternatively or collectively, Cenarius could also be based upon Cernunnos, a Celtic nature god who was often depicted with antlers, similar to Cenarius. Cernunnos is also worshiped by neo-Druids, and was worshiped by ancient Druids. “Cernunnos is the god of all wild things and nature, woodlands, fertility, and the hunt.” Cenarius is voiced by Tom Wyner in WarCraft 3: Reign of Chaos and Neil Kaplan in World of WarCraft: Cataclysm.

Aviana was a winged demigoddess and mistress of the Mother Tree, G’Hanir. She was killed in the War of the Ancients but was resurrected during Ragnaros’ siege on Mount Hyjal. Long ago, Aviana was a normal raven until she was chosen by Elune to deliver messages from the moon goddess to her son, the demigod Cenarius. Soon she was carrying messages among many of the powers of the ancient world; each power granted the raven new abilities required to carry out her duties until she eventually became an equal among them. Aviana prefers to keep her distance from combat, acting primarily as an observer or messenger. When drawn into battle, she will strike from a distance for as long as possible using her magic and her longbow before changing into raven form to charge and claw opponents while trying to make her way to freedom.

Malorne, or Apa’ro, is an enormous white stag that roamed the land as protector of nature. His power lay in nature itself and he is responsible for the creation and nurturing of nature in the world. He is the father of Cenarius, who inherited his dominion over nature. Furthermore, he was one of the first living beings in the world. It is theorized that Malorne is older than Elune herself.Although Malorne was slain by Archimonde during the War of the  Ancients, it is currently believed by night elves, that he transcended death and that he has returned to Elune’s side or sleeps in the Emerald Dream. By the time of his death, he had become one of Azeroth’s most beloved and powerful demigods, and he was renowned for his wisdom. His name was likely taken from the random Keeper of the Grove hero in Warcraft III: Reign of Chaos. _________________________________________________________________ Which one of these exceptional Druid characters is your favourite and why? Let us know in the comments below. Stay tuned for our next part of the series featuring Valeera Sanguinar and her legendaries.