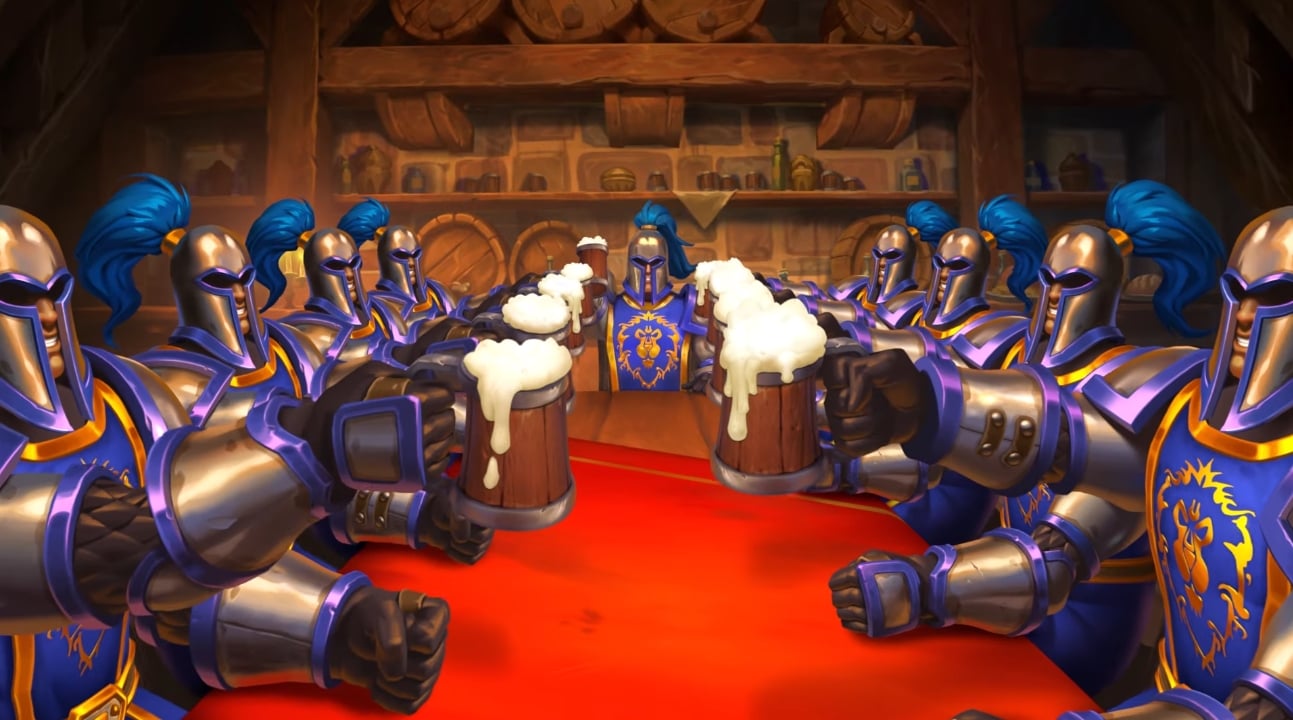 Hearthstone, almost seven years after it was released, is still going strong and continues to bring in a steady stream of new players on an expansion by expansion basis.

If you’re new to the card game genre, and you want to get up to speed with the meta, learning the ins and outs of the game’s slang and terminology is a wise decision.

You’ll find the words and phrases listed below in the matches you encounter, the streams you watch, and the guides you read. They’re the bread and butter of Hearthstone and, indeed, many digital card games.

Aggro – Short for aggression, a tactic, or type of deck full of low-cost mana cards. The aim of this deck is to trade and deal as much damage as possible in a short period of time.

AoE – This stands for area-of-effect and refers to various cards, usually spells, that deal damage to two or more enemy minions on the board. Flamestrike, a seven-cost Mage spell, is a prime example of this.

Burn – This can relate to either direct-damage spells or cards burned via various effects or overdraw.

Cantrip – Cantrip is a common term in card games that relate to cards with multiple effects, including one that allows you to draw a card.

Classic – This is a format that invites players to craft decks and compete using Hearthstone’s original 240 cards that were released in 2014.

Combo – This word has several definitions in the context of Hearthstone. It can refer to a deck relying on a combination of cards to win a match or an effect from Rogue cards that provides additional effects if a card was played earlier during the turn.

Constructed – This is the main Hearthstone format that consists of Classic, Standard, Wild, and Casual. You can build decks with cards from your collection.

Control – These decks use beefy minions with Taunts and various spells to control the board until the later stages of the game.

Cycle – This is a card that can draw another card. While some cards allow you to trade one for one, others allow you to draw two or more to your hand.

Direct damage – A spell or effect that can be targeted to deal damage to a target of your choice.

Draft – This is Hearthstone’s secondary game mode, often referred to as Arena. In this mode, players draft decks and compete in a tournament-style format to earn rewards.

Face – Every player has a Hero Portrait. By “going face,” you’re attacking the player directly, ignoring the minions on the board.

Face tank – This means you’re using your “face” to take down a minion and receive damage in the process. Some classes with weapons have to face tank damage to take down minions on the board.

Ladder – Ladder is the ranked play rankings. By climbing up in ranks, you are climbing up the ladder.

Meta – The meta is defined by the current popular decks in the game. By having a good read on the meta, you can modify your deck to counter it.

Midrange – This deck type typically has several cards with mana costs of five or six. The main goal of this deck is to survive against Aggro and overwhelm Control decks.

Mill – These types of cards allow you to burn through your opponent’s cards either from their deck or their hand.

Mulligan – The mulligan phase is the first phase of a match where you have the choice between keeping your cards or putting them back in your deck. You can select one or more cards with no restrictions.

Nerf – Nerfing refers to the process where the developers, Blizzard, reduce a card’s power. If a minion had three attack, for example, and the devs brought it down to two attack, it was nerfed.

OTK – An acronym for “one-turn kill,” this refers to various combos which allow the player to take out an opponent from a high health amount.

OP – Short for overpowered, this term relates to cards that have powerful stats or effects and are strong in the meta.

Ping – This is used to describe a Mage’s hero power, a targetable ability that deals one damage.

Ramp – Some classes have the ability to increase their mana crystals permanently or temporarily, and are thus able to put out higher-cost monsters earlier than usual. Druid is the best example of this.

RNG – This is an acronym for random number generator. Many cards have effects that add a random minion or spell to your hand.

Roping – You have a predetermined amount of time to execute your move. Some players, often to frustrate their opponents, like to run down the clock and pass at the very last second. This is Roping.

Tempo – This describes the momentum of a match and a type of deck. If you have tempo, you usually have an advantage over your opponent.

Token – Cards generated from other cards.

Top Deck – Drawing the required card from the top of your deck.

Value – Trading a card for multiple of your opponent’s and building an advantage as a result.

Wild – Wild is another Hearthstone format and includes older expansions, unlike Standard.

Zoo – Zoo is an archetype mostly used in the Warlock class. It consists of many cheap minions.

Adapt – Choose one of three bonuses given.

Battlecry – An effect that comes into play when the card is played from your hand.

Charge – Allows the minion to attack immediately opposing minions or your opponent.

Choose One – Mostly found on Druid cards and allows the player to pick an effect from two or more.

Combo – Combo cards are often found in the Rogue class and get a bonus effect if a card was played earlier that turn.

Counter – Stops a card from having any effect.

Deathrattle – An effect that happens when a minion dies.

Discover – Pick one of the three randomly generated cards to add to your hand.

Divine Shield – The first time the minion takes any amount of damage, ignore it.

Enrage – While damaged, the minion has additional effects.

Freeze – Can be temporary or permanent and stops the minion from being able to attack.

Immune – Usually an effect that applies to heroes, protecting them from being attacked.

Inspire – An effect happens when you use your hero power.

Jade Golem – Related to an expansion where cards would summon 1/1 Golems during its first effect and then those would gain +1/+1 for each additional card played to summon one.

Mega-Windfury – A rare effect that allows minions to attack four times in a turn.

Overload – You have less mana next turn, depending on the number of crystals noted on the card.

Poisonous – Instantly kills any minion damaged by it.

Quest – Cards that start in your hand and require several actions to be completed.

Secret – Some classes have access to cards that can be played during their turn, but only activated during their opponents. They are shown as question marks and are unknown until the effect is revealed.

Spell damage – Some cards give you this type of stat, which increases the damage of abilities by the noted amount.

Stealth – Minions or heroes that can’t be directly targeted until revealed.

Taunt – Minions that cannot be bypassed by the opponent. They are usually played to protect a player or certain minion on the board.

Tradeable – A Tradeable card can be played in one of two ways. It can be played normally, or it can be dragged into your deck to spend one mana and draw a new card.

Windfury – Allows a minion or hero to attack twice during a turn.

BGH – Acronym for the Big Game Hunter card, which destroys minions with seven or more attack.

Dennis – This refers to a player who makes a misplay or a suboptimal play.

Disguised Toast – The infamous streamer who got his name from a minion called SI:7 Agent. When played, the minion says “Ha, this guy’s toast.”

Dudes – This usually refers to the Paladin hero power that summons tokens.

Frog – Related to the Shaman spell Hex, which converts a minion into a 0/1 Frog.

Get down – Refers to the Noble Sacrifice secret from the Paladin class.

Rag – Short for Ragnaros, the Firelord.

Sheep – Similar to the Shaman Hex spell, Mage has access to Polymorph, which transforms a minion into a 1/1 sheep.

SMOrc – A Twitch emote that looks like the default Hero Portrait. The emote is associated with a player going for the opponent’s “face” and ignoring the board.

Yogg – Refers to a minion called Yogg-Saron, Hope’s End, which has random effects when played.