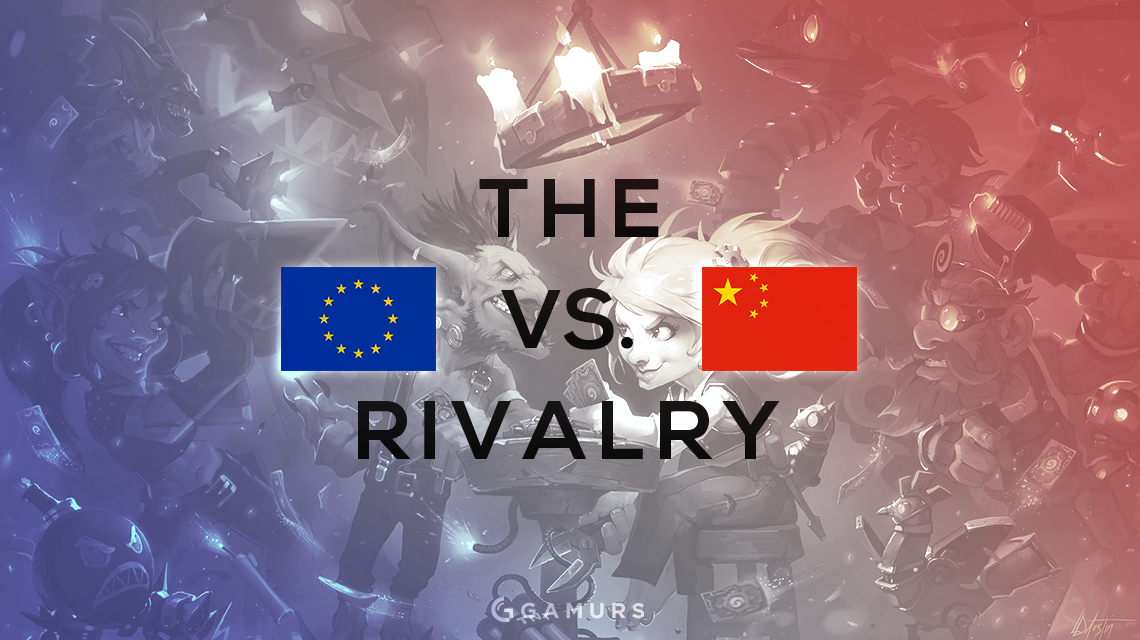 A well-known rivalry in Hearthstone, and to be honest in reallife as well, is that of West vs East. But in our card game, it ismore specifically a rivalry between Europe and China. There havealready been two events in the name of that rivalry and a third oneis coming up in a few days, so let’s have a look at thepast.

Just over a month after the game was released, in the spring of2014, 2P.com and 17173.com organized Hearth2P EU vs CN Masters, atournament that marked the first face-off between the twocontenders. There were qualifiers on both the EU and CN servers todetermine the top 4 who would represent their region as a team inthe Grand Finals, and the winning team would take home 50,000 CNY(~$8,000 USD).

The qualifiers concluded and the team representing Europeconsisted of Janne “Savjz” Mikkonen, Adrian”Lifecoach” Koy, Aris “Beherit“Roussos, and Dima “Rdu” Radu. Savjz was thenplaying for Team Curse and he was the one to win the EuropeanQualifier. Lifecoach was teamless at that moment and finished as arunner-up in the qualifier. Beherit and Rdu were teamless as well.Other notable names that did not make the team were Mirrari,Ignite, Kaldi, Cipher, and Gnimsh.

The tournament was casted by Kripp and ChanmanV. It featured aBo5 all-kill format, and as soon as it kicked off Europedemonstrated its superiority, as they crushed the Chinese team in adevastating 4-0 sweep (3-0, 3-1, 3-1, 3-1). Each European playerearned $2,000 and each Chinese player earned $800.

The second edition of the tournament came back almost a yearlater and was organised by NetEase, once again with separatequalifiers for Europe and China. The difference this time was thatthe main event would be a LAN at the NetEase studios in Hangzhou,China and that, in order to motivate the Chinese players, if one ofthem won the tournament, he would be awarded a Ferrari California.The prize pool was also increased to 52,000 EUR (~$58,950 USD).

The Chinese showed a huge amount of improvement from the yearbefore, as they managed to reach the semifinals with two of theirplayers – TiddlerCelestial and SleepyShaman, who would face Hawkeyeand Kolento accordingly. Kolento won with a very close 3-2 andHawkeye earned his win a bit easier with a 3-1 scoreline. And thatwas it, the Chinese had lost hope, as we had an all-European final.The finals were very intense and Kolento managed to slip away witha close 3-2 score once again. It is funny how fate works, asKolento was just a stand-in for Max, and who knows what would havehappened if Max played it after all.

So with the score already being 2-0 in Europe’s favour, athird installment of the series will take place in a couple ofdays, with the same format (Bo5 Conquest), a lowered prize pool of44,000 EUR, and once again a Ferrari California as motivation for aChinese player to win the tournament. The tournament is organizedonce again by NetEase and it will take place at Yuanshen SportsCentre Stadium, Shanghai, China.

The majority of the Hearthstone community believes that thiswill be another easy win for Europe, as the European team isstacked with world-class names that are hardly likely to give a winaway. However, China wants to have its revenge and take their firsttour off Europe along with a Ferrari to drive back home, and willdo their best to achieve it. We will just have to wait and see whathappens, because in Hearthstone surprises always happen!