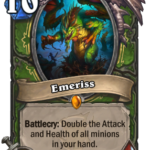 Each Hearthstone expansion introduces hundreds of new cards into the game. Though they all come from packs, not all Hearthstone cards are created equally.

Some cards quickly find a healthy spot in the meta due to their high utility levels, but certain ones can end up being forgotten.

Unlike fill cards that players often have to use even if they would like to have a more powerful card in that slot, the worst cards in Hearthstone almost never see the light of day in the game’s ranked ladder. You can still run into them from time to time in the Arena mode, however, meaning you may have heard some of the least-heard voice lines in the game.

Considering Blizzard Entertainment doesn’t usually redesign or balance cards, most of the worst cards maintain their status for their lifetime unless they’re overpowered. While you can still have some of them in casual matches where most players focus on building more fun decks, they’ll never be competitively viable.

Dragons have always been unique in the Warcraft universe. While names like Ysera and Deathwing could be considered formidable cards that were stable parts of certain metas, Nozdormu was always seen as a meme card.

For a nine-mana card, the 8/8 stats are just mediocre, and its effect to reduce both players’ turns to 15 seconds just doesn’t accomplish anything on the field. You can tell its main goal is to cause players to make mistakes, but the number of options is usually limited when you reach the later stages of a match.

Considering it also reduces the timer for the players who play Nozdormu, it’s basically a double-edged sword without any advantages.

Hearthstone players usually have strict standards when it comes to the base stats of a card. A decent card is generally expected to have an attack and defense value equal to its mana cost. Mayor Noggenfogger is miles away from satisfying that condition, and he has an effect that’s just impossible to utilize in any possible setup.

Hearthstone already lets you fill your decks with random cards. The problem is you’ll only be able to do that with the cards you own. If you don’t have that many cards, you’ll be stuck with limited options unless you have a Whisband the Wonderful. It doesn’t matter what other cards you may have in your deck, if you have a Whizbang the Wonderful in there, you’ll continue playing your match with one of his “wonderful” decks.

Whizbang the Wonderful can sound fun, but it’s one of the cards that you’ll want to avoid if you’re looking to focus on climbing up the ranked ladder. While some of the decks he assigns can be considered okay, playing without knowing what’s inside your deck will always leave you at a disadvantage.

Ragnaros the Firelord is an iconic character from the Warcraft universe, and unlike characters like Illidan, Ragnaros’ strength in Hearthstone matched his place in the lore.

As powerful as he can be, you likely won’t want to become Ragnaros yourself when you have eight HP to work with. Majordomo Executus rocks a weak statline and a Deathrattle that doesn’t make up for it. When he dies, your hero automatically gets replaced by Ragnaros, and your HP gets set to eight.

You’ll hardly want to trigger this effect when you have more than eight health, and the number of scenarios where you’ll find an opening to replace your hero with an eight HP Ragnaros when you’re low on health are limited.

Despite sounding cool on paper, the limitation of the card makes it an unplayable Legendary that has been collecting dust on the shelves for years now.

There have been many metas that were just never meant to be in Hearthstone’s history. Freeze Shaman is just one of them, and Blizzard tried every possible way to give this archetype a chance.

Considering Freeze Shamen relied a lot on spells, there was a clear shortage of minions, which Moorabi aimed to fix. Getting a copy of all minions that you freeze is a powerful effect but not when the card that does it has the weakest statline for a six-mana card.

Almost all Hearthstone players can find themselves wishing for that one more turn that’d let you win a match. While the norm is that each player has a single turn to make moves in a rotating order, Temporus adds a little bit of spice to that rule.

After you play Temporus and end your turn, your opponent will take two back-to-back turns before you can also take two turns. The deal would have sounded a lot better if you could be the one to take the first two turns, but this version of it just involves a lot of risks.

If you’re playing against a Rogue, for example, letting them run wild for two turns in a row will always be a risk you won’t want to take. Aside from its weird Battlecry, Temporus’ stats don’t do it any favors, meaning there’s hardly any evidence to support Temporus’ case.

Quests are game-defining pieces that dictate how you’ll be playing the rest of a match. If you’re determined to work toward a quest, they’d better have a decent reward, right? That’s certainly not the case with Raid the Sky Temple since Ascendant Scroll is clearly a worse Hero Power than the Mage default, Fireblast.

Spending two mana to get a Mage spell you’ll only be able to cast at a discount of two mana points sounds like a rip-off since the reliability of Fireball will always prove itself to be more useful in the long run.

If you keep getting Arcane Explosions every time you use your new hero power, you’ll quickly find yourself missing the good old Fireblast.

Most Hunter archetypes rely on minions to do the heavy lifting, and not many of them want the game to drag into stages where both sides have more than eight mana. Hunters are always in a rush to end a match, meaning slow cards don’t usually shine in Hunter decks.

Unlike other cards on our list, Emeriss actually has a relatively cool Battlecry that doubles the attack and health of all minions in your hand, but it’s just stuck with the wrong class. Emeriss would work excellently in Druid decks where you have access to mana-granting cards, though. Druids could potentially work out a formula to gain 10 mana and play Emeriss to catch their opponents off guard. While some could argue the Druid’s hand wouldn’t have many minions to buff due to all the mana-granting spells, even a couple of strong ones would be enough to take over the game.

Emeriss was just at the wrong place at the wrong time, and it could become a meta-defining card if it was a neutral or just belonged to another class.

Against aggressive lineups, Mages rely on board clear to survive until they can take over the match. While most mages will welcome any type of board-clear tools to ensure their survival, the type of randomness that Flame Leviathan possesses just won’t cut it for Mages.

Flame Leviathan comes with below-average stats. Since it performs its effect when you draw it from your deck, the chances of you actually deploying Flame Leviathan are low for seven mana.

Flame Leviathan’s effect deals two damage to all characters, meaning your hero and minions will also be in danger while you’re trying to wipe your enemy’s board.