Earlier this month, Blizzard revealed the first Core Set for Hearthstone that will be launching with the Year of the Gryphon, which begins when the next expansion, Forged in the Barrens, is officially released. While the new cards from the upcoming set have yet to be fully revealed, the Core Set will add onto the eligible cards available for Standard usage from Ashes of Outland, Scholomance Academy, and Madness at the Darkmoon Faire sets.

In total, there are 235 cards in the Core Set. As a whole, these cards are made up entirely of either returning cards that already existed or are new and have never been in the game before. The cards selected to return will help open up more design space and shape the identity for each of the 10 classes going forward each year.

Here are 10 of the most exciting cards that were either buffed or added to Hearthstone in Core Set 2021. 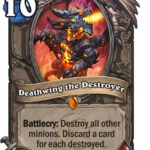 The original Deathwing that launched in Hearthstone was never really considered for any competitive use due to the all-in aspect that led to drastically high risk with moderate rewards. While his effect was sometimes appreciated when provided by random cards like Draconic Lackey or Dragon Explorers, the latest iteration of Deathwing is an improvement to the old one.

The newest retrained version of the Mad Aspect will provide fans of slower controlling decks the chance to take back the board without destroying their entire hand while doing so. If your opponent only has a few threats, you’ll only lose as many cards as your opponent will, making the new Deathwing a more appealing play since you can still retain other threats and answers in your hand.

The newest Illidari Inquisitor can serve as a threat at the top end of a mana curve for Midrange decks that want a way to deal surprise burst damage to your opponent while controlling the board. Combined with Illidari Fel Screamer, the Inquisitor can deal massive damage to the opponent after you declare an attack against them much sooner than they can be expected to deal with an 8/8.

Additionally, on the low chance that Illidari Inquisitor survives for one turn, it can effectively have Windfury since it has the chance to attack the opponent twice. This will force your opponent to spend any attention and resources on removing it. Otherwise, they risk taking 16 damage every subsequent turn.

This new neutral pirate will give aggressive decks that use weapons a new edge for burn and board control. Fogsail Freebooter is comparable to Rogue’s SI:7 Agent, which used to be a premier card that assisted with keeping tempo and clearing opposing threats.

While the Freebooter is only effectively allowed within classes that can wield multiple weapons, the newest Pirate minion will be sure to make waves for decks lacking powerful two-mana minions.

While Lord Jaraxxus has been in Hearthstone since its base set, the game-warping hero quickly fell out of favor when other late-game options became numerous and burn quickly exceeded the 15 health limit that was set on Jaraxxus. Now that the original late-game demon has been modernized and transformed into a hero card, this gives Warlock players a late-game option that doesn’t permanently set their maximum health to below half of the original.

Now that Jaraxxus provides five Armor as opposed to setting your health to 15, as long as you cast it with 11 or more health, that’s strictly better than the original version of the card.

While the original version of the card will be missed for the potential 14 health swing, the hero-card variant of Lord Jaraxxus has the chance to find new life in slower Warlock lists.

As another new card to find a spot on this list, the Novice Zapper serves two roles and performs them at a potent level. For aggressive decks, a one-mana 3/2 has powerful stats for that mana cost and will contest any early board, even if the Overload inhibits your curve next turn. For Combo and Spell Damage archetypes, a +1 Spell Damage that costs only one mana on a singular minion is the least expensive this effect has ever been for Shaman. 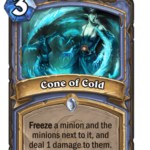 With Frost Nova and Blizzard removed from Mage’s eligible list of Standard cards, both of these iconic Mage spells have made it into the Core Set with sizable improvements. Cone of Cold received a one-mana discount and Flamestrike has attained a one-damage buff, both making them more efficient answers.

Cone of Cold’s one-mana buff now makes it comparable to the potent board stalling card. While Cone of Cold isn’t as effective as Frost Nova with four or more minions, the ability to sunder the board and ping away one-health minions will keep the Cone in consideration for any slower decks.

Flamestrike has always been a potent card that players dreaded in the earlier days of Hearthstone’s history from slow and combo decks like Control and Freeze Mage. But as time passed on, Flamestrike naturally fell out of favor due to more efficient board clears and bulkier minions appearing by the seventh turn where Flamestrike could be played.

Now that Flamestrike deals five damage, it has a more feasible chance at clearing a wider array of minions that can appear by turn seven and potentially become a feared board clear option once again.

While Righteous Protector is neither a new or buffed card, her power level was so remarkable and strong within Paladin’s history that she deserves to be mentioned. Originally released in Knights of the Frozen Throne, Righteous Protector provided the class with a potent one-drop with two powerful keywords that could control the board with either tempo or for defensive purposes.

With Divine Shield, it allowed Righteous Protector to either receive buffs and find favorable trades, or survive multiple hits while saving your health total or other minions when combined with Taunt. With Hand of A’dal and Libram of Wisdom in Standard, expect Righteous Protector to be another key minion that’s vital to Paladin’s success in 2021.

Similar to Righteous Protector, Tomb Pillager isn’t a card that’s either received buffs or is entirely new to the game. But its prevalence in the past warrants an inclusion on this list despite not meeting the initial requirements. For its cost, 5/4 is an aggressive stat line at four mana. But its ability to provide a coin after his death can set up future combos or fix any awkward curve for Rogue.

When it originally made its debut in League of Explorers in 2014, Tomb Pillager became a premium four-drop for the class that relied on cheaper cards to find success. In the upcoming 2021 meta, the Pillager will definitely bring that much required versatility back to the class. While Rogue will be losing the ever-present and powerful Edwin Vancleef, Tomb Pillager will serve as a catalyst for other great cards in Rogue’s immediate future.

Throughout Hearthstone’s history, Warrior has been likened to a controlling class that often breaks a player’s wallet or dust collection to craft most of its cards. While this is true for some metas and rotations, there are still times when aggressive lists, like Pirate Warrior, can shine and make quick work of any unsuspecting opponents.

The newest iteration of the Aspect of Life brings four equally powerful options to take control of the game. You can either restore your health to save yourself from burn, heal your minions to protect them against damage, destroy large opposing minions, or blast the opponent directly for late-game reach.

Alexstrasza the Life-Binder is easily the most splashable late-game Dragon legendary out of all the reimagined Dragon Aspects. While Malygos is great refuel for spell-based control decks and Onyxia is a constant top-end threat for midrange token board-centered lists, Alexstrasza will be a consistent damage or healing threat that both controlling lists and aggressive decks must be mindful of once turn nine arrives.

While the ability to bring yourself to 15 health from the jaws of defeat or deal up to 15 damage to the opponent to set them up for a combo on the following turn will be missed, the newest Alexstrasza will be a welcomed tool for slower decks everywhere in the new meta.

Try out these cards for yourself when Hearthstone’s first Core Set goes live when Forged in the Barren releases later this month alongside Year of the Gryphon.