Mirror matches are one of the most important parts of Hearthstone. Not only are they going to be common when playing any popular deck, but they also teach you a lot about your deck. When playing the mirror you get to see your deck from a different angle, which can then teach you a lot about its assorted strengths and weaknesses. This can be especially important when first learning how to climb and can help you win games you would normally lose. In this guide we will look at the mirror for Tempo Warrior.

Tempo Warrior has many different versions these days. Some of them like to play a whole slew of big finishers, some go with a lot more midrange threats (my personal preference) and others are more packed with removal and tech options. The core of Tempo Warrior, based around quick damage and efficient minions, is going to be the same through each deck, but there is a lot of room for innovation. You can tune the deck to fight any meta or the decks you are seeing the most. To help you figure out how to do that and to understand the core cards, two guides have been linked below.

When playing against Warrior you typically want to assume they are going to be aggressive. The reason is that if they are control you have a chance to correct your curve, but mulliganing wrong for Tempo can lead you to fall way behind. As a result, you want to look for all of your early drops here and do everything you can to get something down early. Curve is going to win this game, so you need to have an aggressive mulligan to go along with that plan. 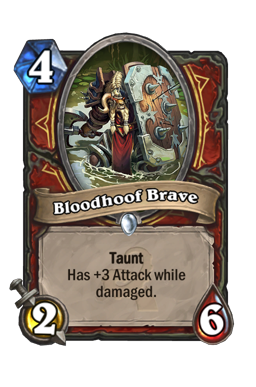 As you can imagine, this game is all about tempo. Both you and your opponent are going to spend most of your time trying to get control of the board, which is going to lead to pressure and eventually the win. This is a game where you need to spend all of your resources to get a board state where you have a minion and your opponent doesn’t. Once you pull ahead you are going to be able to control priority, so always focus on clearing before you start to push for face. The only exception being if you can set up two turn lethal.

The other half of this game is efficient removal. Tempo Warrior is not a deck that has many good removal options. As a result, almost all of the big threats are going to be very hard for either side to deal with.

Execute is pretty much the only non-weapon removal option the deck runs, and if you can get those out of your opponent’s deck early you should be able to absolutely dominate the late game. You want to push and never be afraid to run minions onto the board.

The opening parts of the game are very interesting. The reason is that it is very hard to read whether you are going to be aggressive or reactive. Both you and your opponent have a bunch of random cards during these first turns, and if you get your minions down first you are the aggressor. However, if your opponent starts then you want to play control to build into your middle game.

In regards to above paragraph, you always want to clear during these stages. The biggest reason is that many of Tempo Warrior’s minions don’t match up well with each other. As a result, you are often going to have a lot of damaged minions, which then sets your opponent up to get in an early

Battle Rage. It may not seem important at the time but losing card advantage will crush you during the middle turns of the game. You want to limit that as much as possible.

Always run out minions here if you can. Many people will hold back their cards to try and get value later on. While that’s understandable, you typically want to just see how much removal you can get your opponent to spend. For instance, a naked

Frothing Berserker can eat an

Slam, which puts you in a fantastic position later on.

Turn three is the one of the key turns in this match. This is where the big threats start to come down that demand removal.

Acolyte of Pain is a card you want to kill as efficiently as possible and whatever you do, do not let

Frothing Berserker live. Even a lone

Ravaging Ghoul can be a problem because of how it challenges turn four.

The middle turns of the game are usually where one person begins to come out on top. This where you want to spend your cards to push for damage while also keeping your opponent’s minions off of the board. Even having just a 3/3 can really force your opponent into awkward turns where they have to use mana to kill it rather than advancing their own minions.

The two most important minions here are Kor’kron Elite and

Bloodhoof Brave. Bloodhoof Brave is one of the strongest threats in the game and it is very hard to clear. You want to set yours up in a way where it is going to eat an

Execute. While not strong as a 2/6, the threat of five damage and the fact that six is so hard to reach will often make your opponent expend a lot of resources to kill it. In the same vein, always be ready to deal six on turn four.

Kor’kron Elite is very important because of how well it pushes for damage. The four mana minion is good at trading into things when you have no other options, but also do not be afraid to drop it on turn four and go face if you have no other play. It is a great way to put your opponent on the back foot and force their hand.

Also be aware of 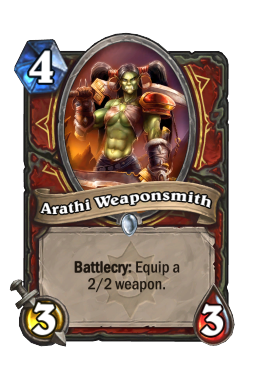 Arathi Weaponsmith, which has become increasingly popular over the past few weeks. This card acts much like Kor’kron Elite where it gives you a way to add a threat to the board that can go face or do damage. However, here you can simply hold onto the 2/2 weapon and wait to use it later on.

Execute is extremely important to use here. While there is a late game, it is mostly going to be one person finishing off the other rather quickly with their big minions. As a result, you want to hold the board moving into turn seven and eight. One of the best ways to do this is by using Execute to clear a large threat while you push damage through. If you have to use the removal spell early you should, but having it to cement your lethal push is what you want it for.

As the game moves towards the later turns you need to push while also being very careful. Damage is going to be king, and this is going to be a race. Play to your outs and know how much damage your opponent can do at any one time. While

Grommash Hellscream is the easiest one to look out for,

Ragnaros the Firelord, Kor’kron Elite and weapons all stack up very quickly. Watch out for all of these threats, but play to yours as well.

An important thing to remember is that Tempo Warrior has only two taunts and very few ways to gain life. Do not be afraid to push hard for lethal if you are winning the damage race. Bluffing you have more damage than you do can also be good to buy time, especially if you have more life than your opponent.

Always plan to use

Armorsmith to your advantage. The two drop may seem like a very low-impact card, but having extra armor can come in handy as the game goes on. Running her out early to get small value while trading through the game can be very important for the final stages.