One of the most hyped aspects and, actually, key aspects of the latest expansion, Means Streets of Gadgetzan, were the three rival gangs; Grimy Goons, Kabal and the Jade Lotus. During the slow set reveal Blizzard had tried to build up hype surrounding the gang war between those three by releasing blogs and newsletters informing us about what is going on in Gadgetzan. They surely did put a lot of thought into this aspect of the set and that was shown during a Blizzcon panel where they really went in-depth about the various designs of weapons, clothes and customs of each gang.

With the gang war being such a key aspect and the expansion being released recently it is time to check how are the gangs doing. In this article we will briefly take a look at the current state of the war for Gadgetzan, how is each gang represented on the ladder and which gang currently has the upper hand.

For starters we will take a brief look at all available commonly known information that we have on hand. The three gangs of Gadgetzan are the Grimy Goons (hunter/paladin/warrior), the Kabal (mage/priest/warlock) and the Jade Lotus (druid/rogue/shaman). Each class has its own unique mechanic and 3 tri class cards (one discovers a card from each class, one has something to do with the gang mechanic and the last one is the gang leader). Now, a little after the release of the expansion, Blizzard had published an image on twitter where they had the city of Gadgetzan split into three parts, one representing each gang, and each had a percentage that was supposed to show how much play is the gang currently seeing on the ladder. You can find the original image here

The image was posted on the 6th of December, 5 whole days after the launch of the expansion, and from it we can see that the Kabal was leading with 37% score followed by the Jade Lotus with 32% score and lastly the Grimy Goons with 31% score. Because these percentages were made by Blizzard who have access to info that we could only hope to have we must take these numbers as the absolute certainty. However, that doesn’t mean that things have changed from then until now.

Determining the Gang representation on the ladder

The first and foremost thing that we need to determine in order for this analysis to work is how to determine the Gang representation on the ladder. Now, we all know which 3 classes is each gang made out of and we could simply just check the current state of the meta to declare a winner by the tier ranks of each class but that would be a false.

In short, the first condition in determining the gang presence on the ladder is that the decks must be built around the unique gang mechanic. I don’t know about you but I think that this is a fair condition.

Another thing that needs to be determined is what resource are we going to use in this research. Unlike last week, this week I’ve decided to use the VS Data Report to check the current metagame because I believe it to be far more accurate than the current Tempostorm Meta Snapshot. If you wish to check the latest VS Data Report you can do so by clicking here.

We will be looking only at the Overall chart and we will be considering all classes that have a usage percentage. As stated previously, we will be taking into consideration only those decks that are built around the unique gang mechanic.

In short, the second condition in determining the gang presence on the ladder is using the data from the VS Data Report, the Overall chart.

Last but not the least we need to make a good scoring system. This is probably the most difficult part of the research. At first I thought that I should go with variety which would mean that if Grimy Goons have 0 gang decks on the ladder, Kabal has 2 and Jade Lotus has 3 then the Jade Lotus wins, Kabal comes in second and the Grimy Goons come in third. After playing with the numbers a bit I’ve eventually decided that this isn’t doing too well for me. The reason behind this is that some classes just don’t work with their gang mechanic. Warrior is once more a great example. Grimy Goons have a hand buffing mechanic which is decent but the hand buffing cards that warrior got are awful and the warrior has no reason to play them instead of some better cards like pirate cards. This automatically lowers the Goon’s chances in this race because the classes that belong to that gang have a far better deck alternative.

What I’ve eventually decided to go for is the percentage representation. This means that if a gang has one deck that has an enormous usage percentage on the ladder, like 16%, and another gang has three decks that are among the top used decks on the ladder, then instead of that other gang winning due to having more decks the winner will be determined by summing up the percentage of all decks from each gang and pinning the results against one another. This is more fair because of the previously mentioned reasons which is that sometimes the gang mechanic just won’t work well in each gang class.

In short, the gang which has the highest usage percentage sum of all gang mechanic decks on the ladder right now is declared a winner.

Now, a very brief explanation on why I’ve chosen the Reno route for the Kabal. Although potions and dragons are also a thing in the Kabal gang, I don’t consider them being a main theme of the gang. This is why I’m not going to count any dragon deck on the ladder in this competition. Reno decks, however, apply because it was specifically stated, by Blizzard itself, that the no duplicates mechanic is the mechanic of the Kabal.

The current winner of the Gadgetzan gang war

With all of the rules out of the way, ladies and gentleman, dear readers, I am glad to announce the winner of the Gadgetzan gang war.. 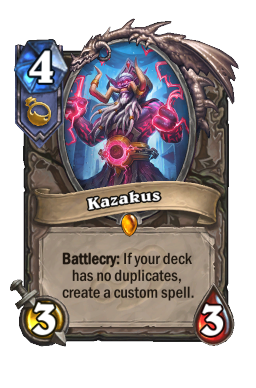 kazakus and the Kabal!!! That is right, Kazakus and the Kabal take the win with an astonishing 21,05% ladder dominance. Congratulations to all of you Reno lovers, your gnag has won the first Gadgetzan gang war. The losing gang was the Grimmy and the second place goes to Jade Lotus with 16,61% ladder dominance. Sorry, Grimy Goons fans, perhaps you shall have better luck when we do this again next month.

Just for fun, if I’m going to do this by the number of decks on the ladder, than Kabal and Jade Lotus are tied for the first place, while the Goons are still the in the last spot.

Predictions for the future

Dear readers, the metagame is still young and there is still time to overthrow Kazakus and the Kabal. Next time I’ll be doing this is in January and what I expect to see in at least some Grimy Goons representation on the ladder and the Jade Lotus decks having a bit higher usage rate, but I don’t expect the Kabal to lose the first place in this war simply because Renolock is such an amazing deck that is in a great spot, in fact it is a tier 1 decks, so a meta should have to take a drastic shift in order for Jade Lotus to win in January.

It is a bit of a let down that the Grimy Goons are in such a bad position. While I personally think that their gang mechanic is a bit boring, I think that it is healthy for the game to have each three gangs at least somewhat represented on the ladder.

What are your predictions for the next month?

There you have it, dear readers, the current state of the Gadgetzan gang war. I’m a little bit surprised that the Kabal is as successful as it is because I, like many others, have expected the Jade Lotus to be the best gang because of their gang mechanic. However, I was proven wrong and as someone who loves highlander decks I couldn’t be happier for being wrong in this. Reno warlock is better than ever and I hope that we will see a rise in Reno priest and Reno mage as well. I’m not too hopeful for the Grimy Goons, thought, but I still believe that someone will make the hand buff aggro paladin work wonders on the ladder and that the Goons will be better represented in the near future.

What are your thoughts on all of this? Did you had different expectations on which gang will be the dominating one? What are your opinions on the Grimy Goons being the least represented gang on the ladder? Leave your feedback in the comments below and I will answer you as soon as I can. As always  if you’ve liked this article do consider following me on twitter https://twitter.com/Eternal_HS. There you can ask me all sorts of Hearthstone questions (unrelated to this article) and I’ll gladly answer them as best as I can.