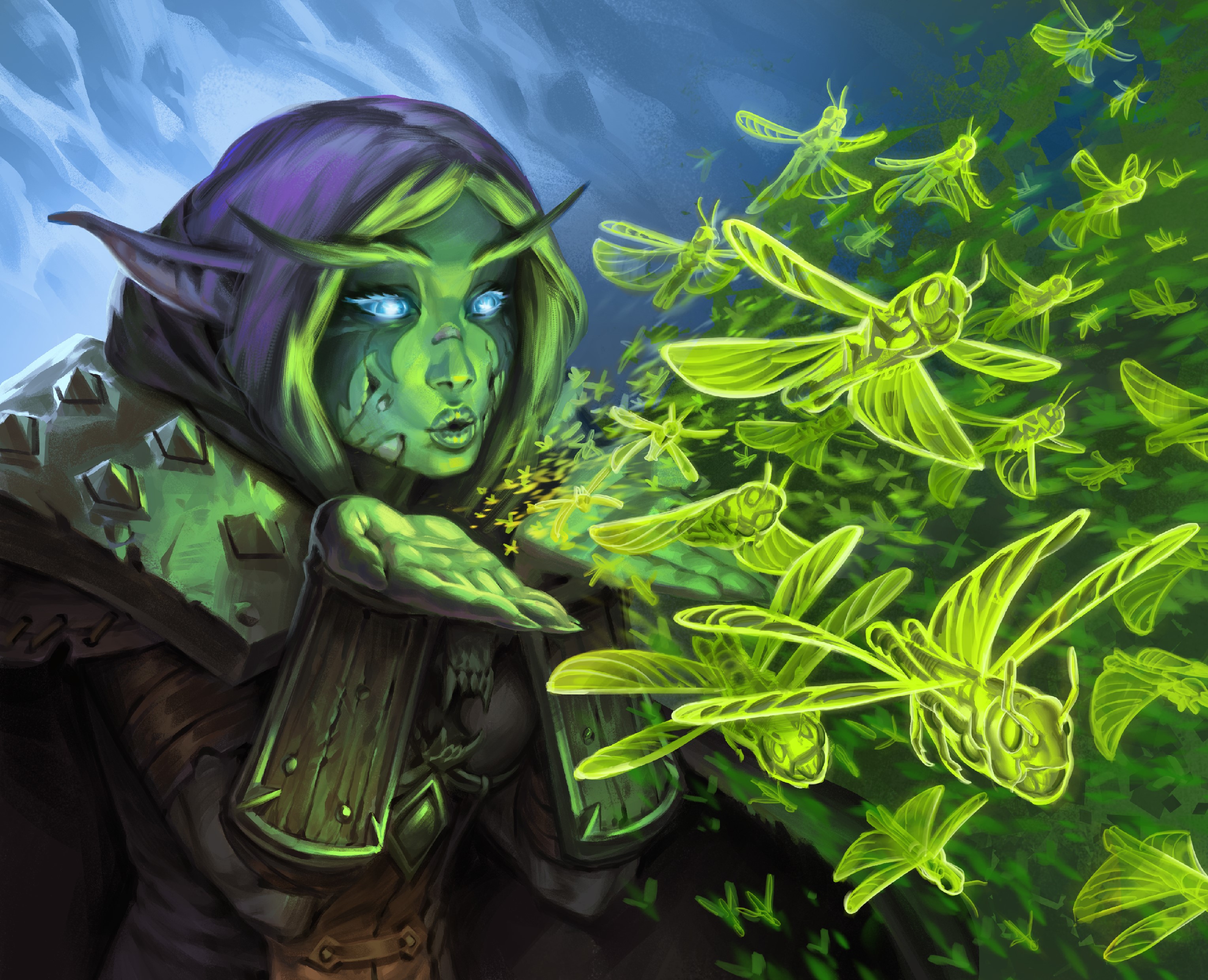 Jade Druid has gone through several iterations since the introduction of the Jade mechanic in Mean Streets of Gadgetzan. With Gadgetzan’s release, Jade Druid became a dominant late game control deck on the back of the powerful synergy between Jade Idol and Gadgetzan Auctioneer.

The deck continued to see play after Journey to Un’Goro, but Standard rotation and the aggressive decks of the meta kept Jade Druid in check. Jade Druid became overwhelmed far too often against wide, early aggression from the likes of Pirate Warrior, Quest Rogue, and Token Druid, and soon became a niche strategy in tournament play or when the ladder started to become too control-heavy.

Plague Jade Druid maintains the win condition of its predecessors—an army of Jade Golems—but adds another couple of options that put it over the top. The deck plays several ramp cards to accelerate its mana towards large spells or minions that swing the game in your favor. The best among them, Ultimate Infestation, provides 17 mana worth of value for the price of 10. Ultimate Infestation is a Firelands Portal, Sprint, and Shield Block in one package and wins the game through the sheer card advantage it generates. That card advantage can make it more likely players will be able to use Nourish to ramp.

If somehow the Jade Golems or Ultimate Infestation don’t get the job done, Malfurion the Pestilent will. Another newcomer in Knights of the Frozen Throne, Malfurion the Pestilent populates the board with a couple of minions—but more importantly, changes your Hero Power. This Hero Power gives you the choice between three attack or three armor every turn and can be used to chip away at your opponent’s life total as he struggles to fight through your defenses. Combine this Hero Power with a Feral Rage for the last bit of reach to end the game.

At the core of this deck is the Jade Golem engine. Jade Golems grow stronger with each iteration played. While weaker in the early game, this deck uses both mana acceleration and a heavy concentration of Jade Golem producers to ensure a powerful late game board state.

Jade Idol is the main contributor to this strategy. For one mana, Jade Idol summons a Jade Golem or shuffles an additional three copies of Jade Idol into your deck. The common best practice is to play your first Jade Idol, then shuffle your second copy to ensure you have an efficient way to summon Jade Golems when they’re much stronger in the late game. The ability to add additional Jade Idols to your deck means you’ll never reach fatigue nor run out of resources to pressure the board. Jade Golems can often reach 11/11 or higher by the end of the game—and by that time, your opponent’s usually had enough.

Jade Spirit and Jade Behemoth also produce Jade Golems in addition to being minions themselves. These minions tax your opponent’s resources early and can generate lethal board pressure on their own when drawn late. The flexibility of these cards rarely make them a bad topdeck.

Aya Blackpaw tops the list of Jade Golem producers. Aya summons a Jade Golem when she enters and leaves the battlefield, making her the most significant card in the Jade Golem engine behind Jade Idol. Playing Aya after she’s drawn is almost automatic due to the value she creates on your board that requires removal.

In the early game, your job is to ramp. This deck doesn’t operate fast enough when playing fair, so you need to accelerate our mana towards your larger gameplan before the opponent can develop his.

Wild Growth and Jade Blossom are the primary contributors to this mana acceleration. Mulligan aggressively for these two cards. Since you want to be ramping early, prioritize these cards over all others in our opening hand.

The midgame is defined by a combination of ramp, Jade Golem growth, and survival. Your options are defined both by the context of the matchup and what’s in your hand.

Druid’s final ramp spell is Nourish. Nourish can either draw three cards or gain two empty mana crystals. Casting Nourish on curve means landing a Primordial Drake or Malfurion the Pestilent the following turn. When you use your ramp spells, keep in mind what you’re ramping towards and sequence your plays accordingly.

The midgame is also where you really start to grow our Jade Golems. Jade Spirit and Jade Behemoth offer strong middle turn plays that pressure the board when it’s even or you’re ahead, or in Jade Behemoth’s case, protect you if you’ve fallen behind. These cards usually won’t win you the game at this stage but go a long way towards ensuring victory in its later stages.

Most aggressive decks will have your back against the wall by turn five. The deck comes with spot removal like Wrath and Swipe, but those can only go so far against a fast, aggressive opening. Typically, this is where Jade Druid decks meet their match.

Enter Spreading Plague. Spreading Plague is the perfect answer to Jade Druid’s aggro woes—it summons a 1/5 Taunt minion for every minion on the opposite side of the board until both minion totals are equal. Spreading Plague generates two to four Taunt minions with ease against these decks and often survive more than one turn, protecting your life total and buying time to develop your powerful late game.

Here’s where you turn the corner, unleash your win condition, and end the game. Ultimate Infestation stabilizes the board and replenishes your resources. With a freshly stocked hand, you can start applying your strong Jade Golems to the board through your spare copies of Jade Spirit, Jade Behemoth, and Jade Idol. Malfurion the Pestilent strengthens your Hero Power. Primordial Drake protects your army of Jade Golems and provides yet another Taunt to punch through. All of these resources combine to create an unwinnable situation for your opponent.

Plague Jade Druid is not indomitable. Historically, the kryptonite to the Druid class has been large-bodied minions due to the class’ lack of effective spot removal, and the situation is no different here. Decks like Dragon Priest see success against Plague Jade Druid due to their ability to develop substantial board pressure before the Druid can unwind its engine. A Twilight Drake on curve trades with multiple Druid threats. Dragonfire Potion clears any Taunt minions generated by Spreading Plague, clearing the way for a large attack. You’re against the clock in these matchups, and the usual cards you use to buy time are dead draws. You have to act as the aggro player here—ramp aggressively, get your Jade Golems out of Dragonfire Potion range, and look to a timely Malfurion or Ultimate Infestation to dig you out of the hole.

Exodia Mage is the only other deck in the format with a late game of greater inevitability than Plague Jade Druid. Exodia Mage ends the game by casting infinite, zero mana Fireballs off of Archmage Antonidas and four copies of Sorcerer’s Apprentice. Once again, in this matchup, you are the beatdown. Try to assemble board pressure as fast as possible. The Mage player’s AOE removal becomes active after her turn five—at that point, it will be difficult to consistently land attacks. Board clears are funneled primarily through Doomsayer. If you reach Malfurion the Pestilent in time, any combination of Swipe, Feral Rage, and his Hero Power can kill a Doomsayer and preserve your board. Alternatively, you can use these cards together for reach to end the game. Absent Doomsayer, Exodia Mage doesn’t maintain a board presence—any of your spells that deal damage should be aimed at the Mage’s face.

Skulking Geist is a common tech choice for control strategies against Plague Jade Druid. Skulking Geist destroys all one mana cards in both decks and hands, taking away your Jade Idol engine. While a hindrance, Plague Jade Druid can find other ways to win. Look to Malfurion the Pestilent or out-valuing your opponent with Ultimate Infestation to win the game.